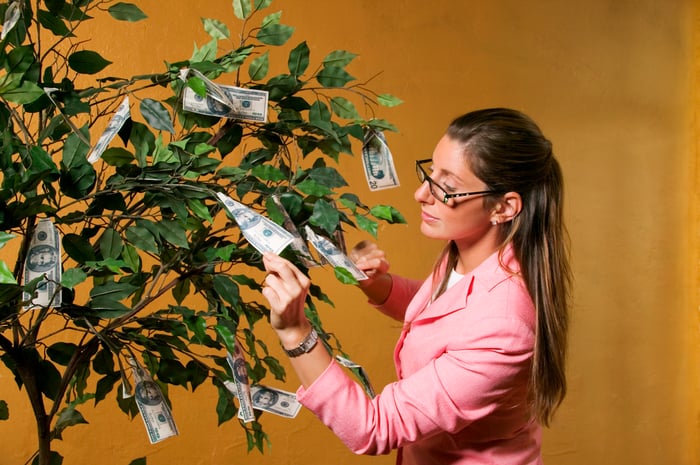 This week, we'll begin in a sector known for its solid dividends, financials, and look at a company that's been a laggard among its peers since the Great Recession: Comerica (NYSE:CMA).

Comerica, which provides commercial and retail banking services, as well as wealth management services, has struggled with two issues. First, like most banks, it's had difficulty expanding its net interest margin due to persistently low lending rates. The Federal Reserve's cautious monetary policy has been music to the ears of the consumer, but has made it very difficult for banks to increase their interest-based income. The other issue for Comerica is rising loan loss reserves, which are a direct result of its energy-based loans and weakness in crude oil and natural gas pricing.

Though we may not be looking at a picture-perfect bank, I believe Comerica has rebound potential that could intrigue income-seekers.

For starters, investors should put into context Comerica's energy loan portfolio relative to the rest of its assets. At $3.1 billion, Comerica's energy portfolio comprises less than 5% of its earning assets, and around 4% of its total assets. Of this $3.1 billion, approximately $1.8 billion is being defined as "criticized loans." In other words, the company has been clobbered for what amounts to 3% of its earning assets. Meanwhile, its net credit-related charge-offs did rise but, at 0.49%, are still historically reasonable for a money center bank. The conclusion would be that investors may be overstating the impact of Comerica's energy loan portfolio on future earnings.

Another interesting point is that Comerica is being proactive about its avenues to growth. It recently hired Boston Consulting Group to look at strategic alternatives to boost its revenue and profitability, some of which could include a sale of the company. While I'm not expecting a sale to occur, a restructuring could potentially restore Comerica's top-line growth to the mid to high single digits.

And, of course, don't forget how unlikely it is that lending rates will stay this low for the long term. While we can't be certain when the rate hikes are coming, a return to interest rate normalization in the coming years seems likely. This will put some pep in Comerica's step and boost its current 2.81% net interest margin.

Next, we'll take a look at why Ingredion (NYSE:INGR), a global provider of sweeteners and value-added ingredients used in food and consumer products, could be just what income investors ordered.

One big key to success for Ingredion over the long term is its ability to make acquisitions to drive inorganic growth. Acquisitions are important in that they help Ingredion expand its existing product portfolio, which in turn can help it forge new partnerships in the more than 100 countries it's already operating in. Furthermore, combining similar operations also means valuable cost-synergies, which Ingredion can use to boost its bottom line.

The most recent transaction that killed two birds with one stone was its purchase of Penford for $340 million, which was completed in March 2015. Penford, a producer of potato starch for food and non-food businesses, has now been fully incorporated into Ingredion's North American operations and has opened new doors into higher-margin specialty ingredients. It has also given Ingredion the ability to reduce costs through merger synergies.

Ingredion also has plenty of levers it can pull when it comes to boosting margins. A growing global population should work in Ingredion's favor over the long term as the demand for food and consumer products increases. This should mean that over the long run, Ingredion's pricing power should improve, allowing it to pass along higher costs to its customers, thus boosting sales. It can also promote higher-value specialty ingredients to impact its margins. This was a big reason its first-quarter earnings handily topped estimates -- and why the company boosted its full-year EPS forecast to a new range of $6.45-$6.75 from a prior projection of $6.20 to $6.60.

Ingredion's current payout of $1.80 annually works out to a 1.5% yield, but its full-year EPS is expected to grow to nearly $8.70 by fiscal 2019. Assuming it doesn't pile up too much debt via acquisitions, I'd suggest a doubling of Ingredion's dividend could be in the cards within the next five to 10 years.

Lastly, dividend investors looking for an attractive company with a history of payout increases would be wise to dig deeper into health and well-being giant Walgreens Boots Alliance (NASDAQ:WBA).

The only reason Walgreens is trading anywhere near a 52-week low at the moment has to do with uncertainty tied to its agreement to buy Rite Aid (NYSE:RAD) for $17.2 billion, or $9 a share. There's concern that regulators may not sign off on a deal that would essentially create two pharmacy giants, CVS Health and Walgreens Boots Alliance. Until there's more clarity on whether or not the deal to buy Rite Aid can proceed, Walgreens could find its shares held down by virtual cement blocks.

However, we're talking about a short-term issue that doesn't seem as if it'll be a long-term impediment to Walgreens' business model.

One long-term trend working in Walgreens' favor is the American consumers' growing demand for pharmaceutical products. The passage of the Affordable Care Act has certainly helped boost pharmacy script fills for Walgreens and CVS, but it's the growing use of generic drugs that holds the real key to success. According to the IMS Institute for Healthcare Informatics, generic drug use could rise to as high as 92% of all pharmacy prescriptions by 2020. Generics are cheaper for the consumer, and since they're cheaper for the pharmacy to acquire, they also comes with higher margins. As generic drug use increases, so should pharmacy profits for Walgreens. Plus, if Walgreens can complete its purchase of Rite Aid, it moves into a sturdy No. 2 position behind CVS in pharmacy market share.

Additionally, investors shouldn't underestimate Walgreens' ability to pull levers to cut costs. Locking in long-term contracts with wholesale providers like AmerisourceBergen is one way  Walgreen secures the best price for its pharmaceuticals and helps deliver predictable cash flow. It has also been working to improve its operating efficiency, and assuming the Rite Aid deal goes through, it's likely to close underperforming locations to improve its gross margin.

Walgreens is paying $1.44 annually right now, good enough for 1.9% yield, but it could easily surpass $6 in EPS by fiscal 2019 if Wall Street's estimates are correct. My expectation is that we'll see Walgreens' dividend doubled from where it is now by 2020 to 2025.