Clean Energy and Big Blue Bus will be together for at least five more years. Image source: Clean Energy Fuels.

On June 2, Clean Energy Fuels Corp (NASDAQ:CLNE) announced that it had been awarded a five-year contract with the City of Santa Monica, California to provide Redeem, the company's brand of renewable natural gas, for the city's "Big Blue Bus" public transit system.

What does the deal mean for Clean Energy Fuels, both in the short and long term? Let's take a closer look at the details, and what it can tell us.

Breakdown of the deal

The City of Santa Monica's Big Blue Bus has been a Clean Energy Fuels customer for a number of years, and the company has clearly done a solid job for the city. Santa Monica, located in the greater Los Angeles metropolitan area, faces some of the most-aggressive emissions standards in the U.S. Furthermore, the city's residents also tend to be environmentally conscious, so there's a lot of momentum for its public transit to operate as environmentally friendly as it can.

According to the press release, this five-year deal will be worth approximately $3 million per year, and will provide liquefied natural gas, or LNG, for the Big Blue Bus fleet of 200 natural-gas-powered city buses. The city also disclosed in the release that it would replace the engines in 100 of its buses with the CWI 8.9L ISL G Near Zero natural-gas engine during the next three years. The engine is manufactured by a joint venture between engine-maker Cummins and Westport Innovations, and is called Cummins Westport.

In short, this is more evidence that the environmental benefits of natural gas -- particularly renewable natural gas -- continue to play a big role in the decision that fleet operators make when it comes time to replace or add vehicles, even as diesel prices stay low: 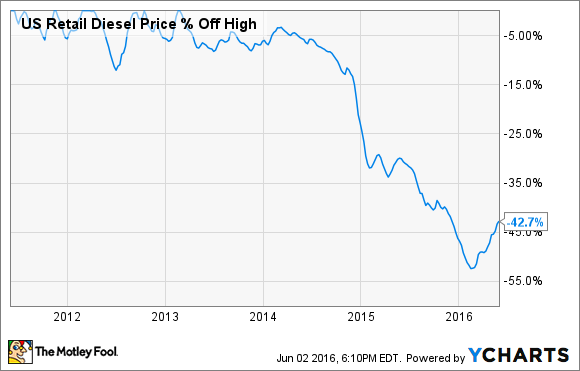 Natural gas prices have also fallen; on a per-gallon basis, it remains cheaper than both diesel and gasoline. The cost of a natural-gas-powered vehicle, however, can cost tens of thousands of dollars more than a comparable diesel-powered vehicle. With diesel still down about half from its peak, it's much easier for fleet managers to choose newer diesel engines, which are both cheaper than natural gas versions, and also more fuel-efficient than their predecessors.

However, cheaper diesel, and improved diesel engines, don't change the reality that air quality is a real concern, especially in high-population urban centers like Southern California. According to Clean Energy CEO Andrew Littlefair, when combined with the new Cummins Westport Near Zero engine, a vehicle would produce fewer emissions than an electric vehicle powered by the grid.

It seems that message is resonating in both the public and private sector, with organizations looking to reduce their environmental impacts as much as improve their bottom lines. The Big Blue Bus deal is only the most-recent agreement that indicates as much.

Combined, those four deals were worth more than 2.4 million gallons of natural gas per year -- and they're the ones the company made public. Redeem volumes increased 70% last quarter after more than doubling in 2015.

Redeem is only part of what's driving Clean Energy

Clean Energy has come a long way in the past few years, outlasting the oil downturn so far, and continues to grow fuel sales and margins, even as diesel has stayed relatively cheap. At the same time, the company has improved its cost structure, and started chipping away at the mountain of debt it took on to fund station expansion that's only just beginning to pay returns.

The company still has about $80 million in debt to deal with before September, and has recently come to a point where it should be consistently profitable -- so there remains some risk. But it looks like the worst is behind Clean Energy, and the benefits of Redeem -- as well as the company's reputation and its geographic scale -- have it well positioned for years of growth.