There are few things more important than earnings when it comes to selecting stocks. But it's not necessarily how much a company earns that matters most; it's rather how quickly a company's earnings per share grow.

It's for this reason that Costco's stock comes across as so much more attractive than its principal brick-and-mortar peers Wal-Mart (NYSE:WMT) and Target (NYSE:TGT). Costco's earnings per share have grown by an annual average of 13% over the past five years. That compares to 5.8% at Target and 0.44% at Wal-Mart. 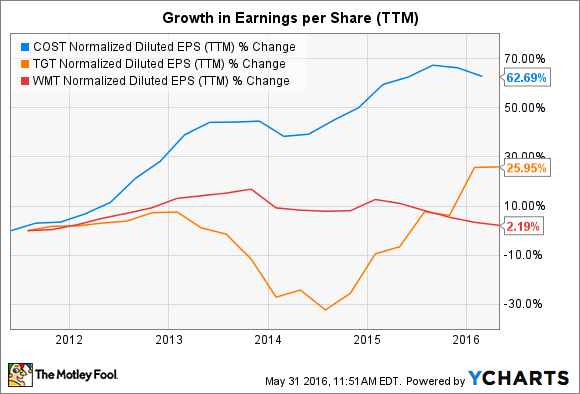 Added to this, Costco still has a lot of room to run. You can see this by looking at its market capitalization -- the market value of its outstanding shares. Costco's market cap is $65 billion. That's nothing to shake a stick at when you consider that Target's market cap is $41 billion, but it's nevertheless a fraction of Wal-Mart's $223 billion.

Because it's so much harder for big companies to grow, this suggests that Costco's rapid expansion could continue. The consensus estimate among analysts calls for Costco's earnings per share to grow by an average of 12% annually over the next two years. That's almost twice the expected 7% annual growth rate for Wal-Mart and comfortably above the forecasted 9% growth rate for Target.

These three points make a strong case for Costco's stock. Added to this, its business model seems to be more immune to competition from online retailers relative to either Wal-Mart or Target. By selling in bulk, keeping margins as narrow as possible, and focusing heavily on foodstuffs, Costco has thus far been able to avoid a head-on competition with Amazon.com.

As the old adage goes, however, there are no free lunches. If you want to pick up Costco's stock, you're going to have to pay up for it. Its price-to-earnings ratio is 28.5, meaning that you have to pay $28.50 for every $1 in Costco's earnings.

By this measure, Costco's stock is meaningfully more expensive than either Wal-Mart or Target's. The former's P/E ratio is 15.6 while the latter's ratio is 12.7. This is the reason some investors might choose to avoid Costco stock.

It's hard to deny that Costco's stock is expensive. Even if you factor in its faster growth rate, it still trades for a pretty penny. Yet, it you're looking for a long-term play on the American consumer, it's hard to find a better way to get the desired exposure without the concomitant risk that Amazon will someday syphon off that growth for itself.

3 Reasons to like Costco's Stock, and 1 Reason to Avoid It @themotleyfool #stocks $COST $WMT $TGT Next Article
Current