Amazon.com (NASDAQ:AMZN) stock is firing on all cylinders. Shares of the online retail powerhouse have gained over 65% in the past year, trading near historical highs in the neighborhood of $725 per share. The company makes razor-thin profit margins, so many investors consider Amazon egregiously overvalued. Make no mistake, though: While Amazon is in fact aggressively priced, the company is no house of cards at all.

Amazon is a typical example of what is generally called a battleground stock, referring to a company that generates strong opinions among both bulls and bears. The bulls typically focus on the company's explosive growth over the long term, while the bears highlight the fact that profit margins are low and volatile.

Amazon is all about expansion. The company sells its products at aggressively low prices to gain market share versus the competition, and the strategy is clearly working on the revenue front. Back in 1995, Amazon was just an online bookstore, producing only $511,000 in total sales per year. Fast-forward two decades, and Amazon is a leading growth player across different retail categories, producing $134.1 billion in revenue during 2015.

Not only is Amazon's performance impressive on its own merits, but the company is also downright crushing competitors such as eBay (NASDAQ:EBAY) and Wal-Mart (NYSE:WMT) in terms of sales growth. The following chart compares revenue growth for Amazon versus eBay and Wal-Mart over the past decade, and the image doesn't leave much room for discussion. 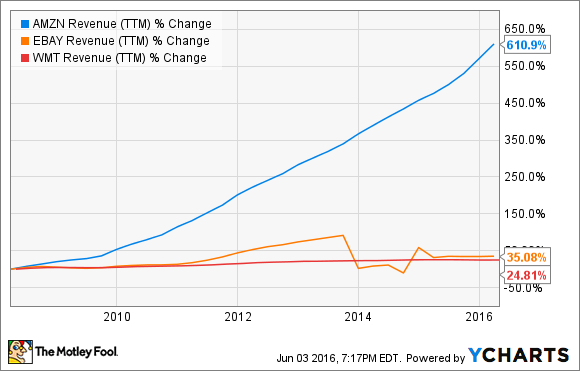 Financial reports from the first quarter of 2016 confirm that Amazon keeps obliterating the competition.

Amazon's revenue growth is indisputably impressive, but earnings are a very different story. The company lost money on a net income level during 2014, and the net profit margin was a razor-thin 0.6% of revenue in 2015. This is a major point among Amazon bears: If the company can't make consistent profits, then those growing sales aren't creating much value for shareholders.

The main reason Amazon operates with low and volatile profit margins is that it's investing massive amounts of money in key areas such as logistics, digital content for Amazon Prime members, and its Amazon Web Services cloud computing division. These expenses are taking a big toll on accounting earnings, but the business is still producing tons of cash on a regular basis.

This is a crucial distinction. Amazon is not inherently unprofitable, but management is aggressively reinvesting for growth, an approach that puts considerable pressure on profit margins. Amazon prioritizes long-term opportunities for innovation and disruption over short-term profit margins. The strategy is uncertain and risky, and it means Amazon is clearly not the right choice for investors who want to own companies making consistent and predictable earnings.

In addition, Amazon is trading at a price-to-operating-cash-flow ratio around 31. This is quite a demanding valuation, and it makes the stock vulnerable if there's any disappointment down the road.

On the other hand, Amazon is both the leading online retailer and the top player in cloud computing infrastructure on a global scale. Sales growth is clearly explosive, and the business brings in massive amounts of cash. The stock trades at expensive valuation levels, but it's not too hard to understand why.