In your 60s, it isn't time to get fancy betting on the next high-risk tech stock or trying to time a volatile industry like energy. You need to find stable companies that can stand the test of time and start paying dividends that can grow into retirement.

Below I've highlighted three companies which I think will be around for decades to come, and which will continue to pay attractive dividends to shareholders.

There's no doubt that people are drinking fewer sugary soft drinks than they used to, but that doesn't mean that Coca-Cola's (NYSE:KO) business isn't worth an investment today. The company has made a swift transition to drinks like water, energy drinks, fruit juices, and even tea. Shelf space is still king in the grocery business, and no one has command of the shelf like Coca-Cola.

You can see below that, despite the change in people's tastes, Coca-Cola has managed to grow overall on both the top and bottom line. It won't be a high-growth stock for investors long-term, but in your 60s it's stability that matters more than growth. 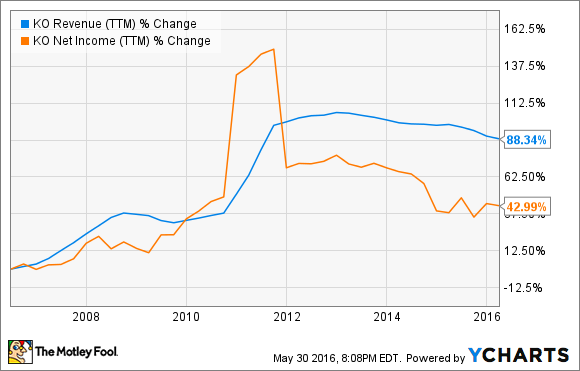 With a rock-solid market around the world and the clear ability to adapt to market changes, I think Coca-Cola will be a big moneymaker for years to come. And with a 3.1% dividend yield today, it'll be a great stock for investors in their 60s.

One of the macro trends we've seen emerge over the past decade is the spread of commercial air travel. As the middle class grows from Asia to Latin America, there's more demand to travel, and airlines are adding aircraft at a rapid rate. To put the growth into perspective, at the end of 2000 Boeing (NYSE:BA) had $152 billion in backlog, and at the end of 2015 backlog stood at $489 billion.

Not only is there a growing opportunity in commercial aircraft, but there's also an emerging space market on the horizon. Just the ideas of large government space contracts or commercial space travel are fairly new to the industry, but Boeing is taking a leading position. It's building the CST-100 Starliner to transport people to the International Space Station, and it's designing the Space Launch System in conjunction with NASA. On top of the core commercial aircraft and military businesses, space could drive long-term growth.

Boeing is operating in a positive macro environment for the foreseeable future. On top of that it's a solid value for investors: Shares trade at 13.6 times forward earnings estimates, and investors are also getting a 3.4% dividend yield. That's a payout that should rise in the future and provide solid cash flow for investors in their 60s.

Another company with a broad macro tailwind is UPS (NYSE:UPS), the delivery company that has made the online shopping boom possible. The company operates in a space where it takes billions of dollars of infrastructure to compete, which is why there are only a few major competitors like Fedex and the USPS. And it should continue to see growth as online shopping expands. 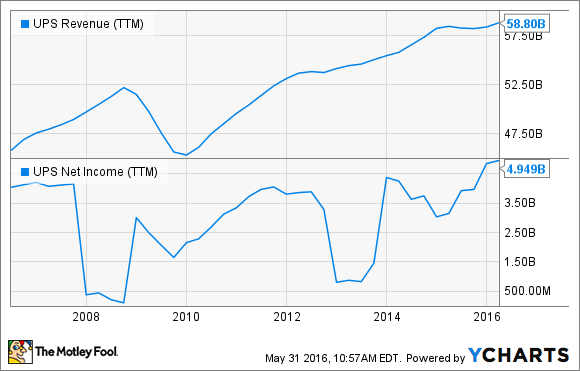 As you can see above, earnings will be choppy, but I think UPS has built a business that will be hard to replicate and will only grow in importance in the future. Who is going to deliver your detergent order or even your weekly box of food, if not one of these small number of delivery companies? And with infrastructure that's hard to copy, it's a valuable position to own.

As for value, shares trade at 16.6 times forward earnings estimates and the dividend yield is 3%: not a bad price for a business of growing importance.

If You're in Your 60s, Consider Buying These 3 Stocks @themotleyfool #stocks $BA $KO $UPS Next Article
Current