College students these days are borrowing more money than ever before. The average 2016 graduate who took out student loans racked up a whopping $37,172 in student debt, and a big reason for the uptick is the rising cost of higher education. 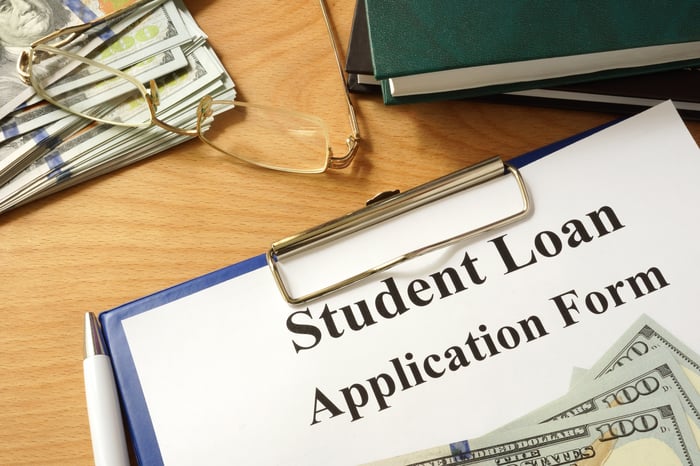 Why are students willing to pay so much for college? It's simple. Given that college is often a prerequisite to employment, many feel that they don't have a choice but to do whatever it takes to obtain a degree. But while college can indeed open the door to higher salaries and better career opportunities, the obscene price tag that comes with it could end up costing you in more ways than one.

When you borrow money for college, you're not just subjecting yourself to many years of loan payments; you're also potentially limiting your opportunities to invest and save for retirement. Research out of Morningstar suggests that for every dollar of student debt you accumulate, you'll decrease your retirement savings by $0.35. In other words, borrow as much as the average 2016 graduate, and you risk setting back your retirement savings by about $13,000.

Remember: Borrowing money for college means having to pay back not just the principal amount you owe, but all interest on that principal. In reality, you'd be much better served investing that money and letting it work for you.

Now let's see what might happen if you were to invest that $400 a month instead. Assuming you're able to generate an average annual return of 8% -- which is conceivable for a stock-heavy portfolio -- over a 10-year period, you could grow your savings to about $70,000.

Taking things one step further, let's say you were to invest that $70,000 for another 30 years, and not add a penny more. Assuming that same 8% average annual return, you'd have just over $700,000 right in time for retirement.

It's not just prospective students who need to be wary of borrowing large sums for college. Many parents take out loans to pay for their kids' educations, as well. While borrowing massive chunks of money as a student comes with certain consequences, borrowing as a parent can be even more detrimental financially.

Imagine you take out $20,000 in loans in your mid-50s to ease the burden on your children, and spend the next 10 years paying them off instead of saving for retirement. At 5% interest, you're looking at a monthly payment of about $212. But if you invest that $212 each month at 5% interest -- a conservative estimate, but one more suitable for near-retirees who shouldn't take on as much risk as younger investors -- after a decade, you'll amass an extra $32,000 to help pad your retirement nest egg. Unless you're in a secure spot financially, taking on student debt near retirement is a very risky move.

It's all about choices

Of course, all of this isn't meant to advocate skipping college, or sidestepping opportunities to help children pay for it. But what it does mean is that, given the choice between two schools with similar credentials, it pays to opt for the one with the lower price tag.

Another option? Consider getting part of your education at a community college, where tuition and fees for the 2015-2016 school year averaged just $3,440 -- a bargain compared to your other options.

Before you sign up for expensive student loans, consider what else that money might buy you. Whether it's a more-flexible adult lifestyle, or a more financially secure retirement, the less you borrow for college, the more options you'll have down the line.