The late spring season is proving to be a fertile time for dividend raises. By my count, the last full week of May saw a healthy 20 shareholder payout improvements. Let's take a look at three of the more notable blossoms.

When it comes to dividend payouts, this home improvement retailer is as sturdy as a two-by-four. Lowe's (NYSE:LOW) is a dividend aristocrat -- that is, one of the very few companies on the market that have raised their payouts at least once every year for a minimum of 25 years running. 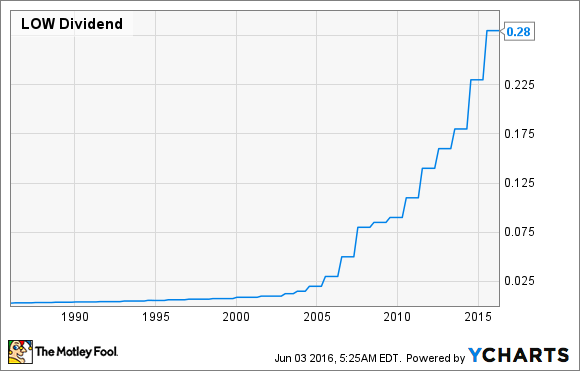 The latest in a long streak of regular raises saw Lowe's hike its quarterly distribution by a chunky 25% to $0.35 per share. It's a big raise, but the time is ripe for such a move. The housing market is thriving, and business is good for home improvement operators. This was clearly reflected in the company's Q1 results, which beat the average analyst estimates and showed encouraging growth in both net sales and bottom-line profitability.

Not only does Lowe's like to hike its dividend, but it's also fond of share buybacks. Combined, the two activities nearly drain the company's free cash flow, yet Lowe's always seems to spend within its means. A healthy housing market means more cash in the coffers, so I'd expect the company will still have room for future hikes in the coming years.

Data storage specialist NetApp (NASDAQ:NTAP) is a company seemingly pulling itself in two directions at once. It's struggling with fundamentals, layoffs have been enacted, and its CFO departed for another company earlier this year. But on the bright side, it just reached into the till for a fresh quarterly dividend raise. It has declared a payout of $0.19 per share, hiking its payout by 6%.

That's been about the only piece of good news coming out of NetApp lately. Its final quarter of fiscal 2016 wasn't pretty, with revenue sliding 10% on a year-over-year basis, the bottom line swinging to a loss, and net profit guidance for Q1 2017 coming in well under analyst projections.

This can be chalked up to what CEO George Kurian described as a "pivot to the growth segments of the market." But that, combined with the costs of shaving its workforce (in February it announced a new round of layoffs that will affect roughly 12% of employees), has clobbered the finances: 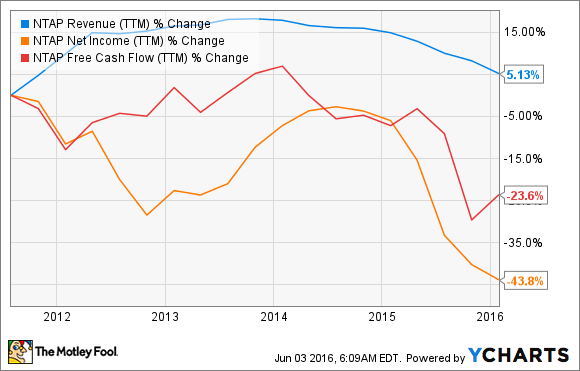 So it's puzzling that not only does NetApp remain an annual dividend-raiser, but it's also spending money to buy back its shares. Perhaps that's working; the company's stock has mostly traded flat, as opposed to down, in the wake of that earnings report. But I wouldn't count on it being able to raise or even sustain the current dividend, given its struggles.

NetApp's upcoming payout will be dispensed on July 27 to stockholders of record as of July 18. It would yield 3% at the present stock price.

The dough is rising at bakery operator Flowers Foods (NYSE:FLO). The company has boosted its quarterly dividend by 10% to $0.16 per share. It did not hesitate to say that the upcoming payout will be its 55th in a row.

This comes just after the company announced its Q1 2016 figures, which, though not exciting, did show a bit of year-over-year growth on the top line (net profit was down slightly). This was a flip from the previous quarter, which saw a drop in revenue and a rise in profit. 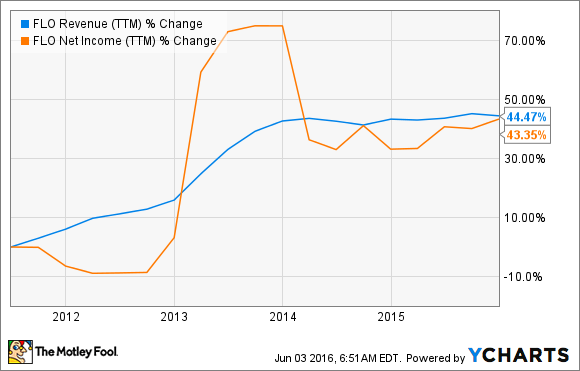 Meanwhile, in the Q1 set of results, net profit guidance for the full fiscal year was bumped slightly upward. Much of the recent gains were due to acquisitions, rather than organic growth in the existing business. Still, the company remains profitable. More encouragingly for dividend purposes, it has managed to boost operating and free cash flow notably over the past few years. This gives it the financial muscle not only to keep its dividend going, but to raise it again before long. I think its payout, then, is safe.

Flowers Foods' new dividend will be delivered on June 23 to shareholders of record as of June 9. On the most recent closing stock price, it would yield 3.4%, which is quite rich for the food industry.