With revenue up 11% on the quarter and subscribers now topping 30 million, the music was sounding pretty sweet this quarter for Sirius XM Holdings (NASDAQ:SIRI).

But there was one number in the recent quarterly report whose growth surprised both analysts and Sirius executives.

It doesn't look like much at first blush -- up just 3% over the prior-year period. But the growth in average revenue per user, or ARPU, is a good sign for the satellite radio company at this stage in its maturation.

The company tracks ARPU by taking the amount of revenue it earns through subscriptions and related fees and advertising, then divides that out by the average number of subscribers on a day in the period, and then again by the number of months.

That delivers a quick, simple look at how much the company is generating from each of its subscribers on a monthly basis.

ARPU had been a key metric in evaluating Sirius XM's progress in the audio market for some time, and the company had been focused on consistently growing the number, which it did. ARPU was up an average 4% per year between 2008 and 2012. 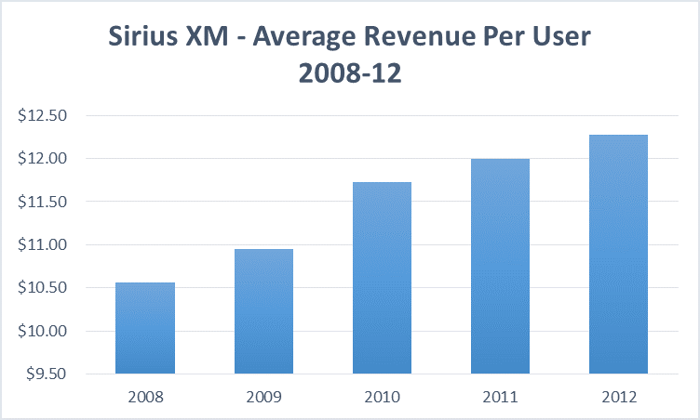 But that began to change a few years ago, as the company started to more seriously explore opportunities to increase revenue in ways that might not deliver the same ARPU, but also didn't carry the costs of installing technology into new cars and sharing revenue with automakers.

These have included subscriber retention programs, efforts to win back former subscribers, and initiatives to get households with one active radio to sign up to activate a second -- or a third -- in some cases, simply by turning on an old radio that had been been deactivated after an upgrade or a new car purchase.

But to do all these things, Sirius XM also developed an intricate pricing scheme that involved both short-term and multi-year discounts, reduced rates, and internet-listening add-ons for the few simple bundle options it offers.

As it did this, ARPU became a less reliable way of tracking the progress the company was making, since getting someone to sign up at a discount rate wasn't a bad thing if it added little costs to Sirius XM.

The company began shooting to grow subscribers while maintaining, or slightly growing, ARPU. As a result, ARPU grew at just a fraction of a percent per year, on average, from 2012 to 2015, even as total revenue shot up by 34%.

That's why both analysts and its own executives seemed surprised to learn that first-quarter ARPU grew by 3% over the prior-year period, rising to $12.66 a month.

"It was more than I expected," CFO David Frear said on the earnings call.

Frear chalked it up to a "favorable mix" of pricing options. It takes a while for pricing changes to show up in the income statement in a substantial way; Sirius XM estimates it takes about a year and a half.

So, you have to look back a bit to see what might have led to the ARPU improvement. An increase in prices on what Frear called "deeply discounted" plans seems to have been a key factor, but not the only one, he said.

"We have said it a number of times over the years that we're constantly tinkering with the [subscription pricing] grid, tinkering with what we emphasize in our marketing efforts," he said. "And we had a great combination of things here."

Investors probably shouldn't get too excited over the unexpected uptick. Executives tempered expectations for the metric moving ahead, and Frear instead suggested that investors should look for "gently rising ARPU over time." 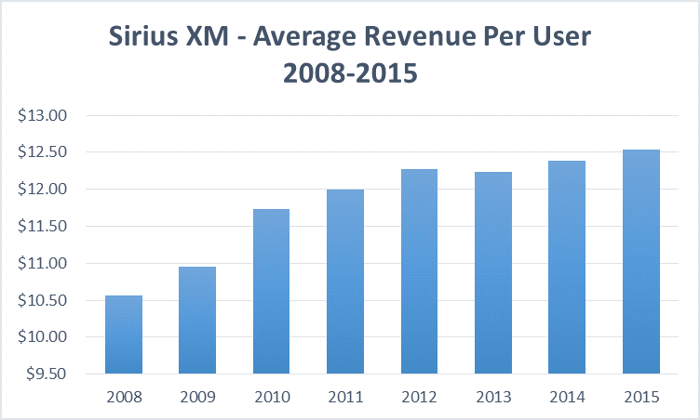 Even if it doesn't last, it's a good sign

So, executives seem to be cautioning investors that this might be more of an anomaly than a signal of a new trend upwards in ARPU. Still, that's not necessarily bad news.

The increase is an indicator that despite the free and cheaper streaming options available, Sirius XM subscribers were willing to pay more for the service than they did a year ago. That's a good sign for investors.