Warren Buffett is among the best investors in stock market history, and millions of people follow his picks closely to try to find ideas for their own portfolios. Even though the overall stock market hasn't made much headway so far in 2016, the Oracle of Omaha has managed to include some solid year-to-date performers within his own holdings, as Buffett recently reported to the SEC on Form 13-F. In particular, four of Buffett's stocks have given investors strong double-digit returns in 2016, and shareholders want to know if the Buffett magic will continue. Let's take a look at these four top stocks from the Buffett list. 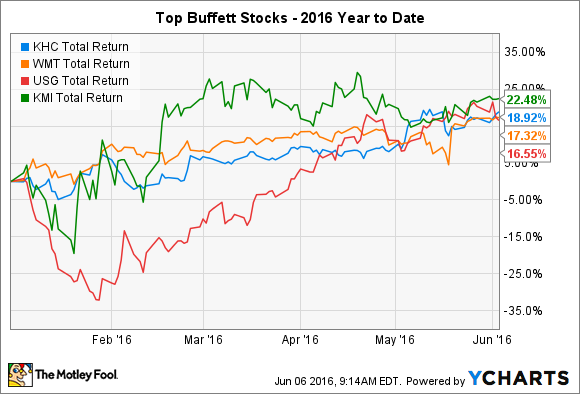 Energy giant Kinder Morgan (NYSE:KMI) is one of the newer additions to Buffett's portfolio, with the Oracle revealing the pick in his 13-F filing for the fourth quarter of 2015. The company sports an unparalleled network of oil and natural gas pipelines and terminals as well as carbon-dioxide transport and storage, giving it competitive advantages over smaller rivals. Yet Kinder Morgan has seen its shares slump in response to energy price declines, despite the fact that its cash flow has stayed relatively constant.

In many investors' eyes, Kinder Morgan combines good value with lucrative income opportunities, as the stock pays a healthy dividend of almost 3%. With the company having just gotten federal approval to move forward with a plan to export liquefied natural gas, Kinder Morgan also has growth opportunities. That mix provides a timely buy opportunity, and even though some doubt whether Buffett himself authorized the purchase, Kinder Morgan is worth a closer look even after its recent run-up.

Food giant Kraft Heinz (NASDAQ:KHC) is a newly formed company, and Buffett's position stems from his purchase of Heinz alongside partner 3G Capital. The latest move upward follows a highly successful result from the merger of Heinz with Kraft. As Buffett described it, when you look at what he paid for Heinz and also consider the money used to pay Kraft shareholders a special dividend, his cost basis on his shares of Kraft Heinz shares was less than half their value even when the merger was first completed early last year.

Unfortunately, Buffett is about to get cashed out of another lucrative investment in Kraft Heinz. This month, the food company can redeem about $8 billion in preferred shares that Buffett owns, and given their 9% interest rate, it's almost certain that Kraft Heinz will do so. Nevertheless, Buffett will retain his common stock holding, and its nearly 20% gain this year points to the health of the company and its management under 3G.

In contrast to the two picks above, Wal-Mart (NYSE:WMT) is a longtime Buffett pick. It has also been a source of funds for Buffett, who sold off some of his Wal-Mart shares recently in order to raise cash for other purchases that he considered to be more lucrative.

Much of the share-price gains in 2016 have come in the wake of solid performance in the company's first quarter, which included earnings that topped consensus forecasts by a dime per share. Interestingly, Wal-Mart has warned that profits could remain under pressure for some time, because the retailer is investing heavily in moves designed to boost longer-term prospects and keep competitors at bay. For now, shareholders are happy with Wal-Mart, but a full turnaround will take a lot longer to complete.

Gypsum wallboard maker USG (NYSE:USG) is another longtime Buffett holding. The company makes Sheetrock drywall and other building materials, such as ceiling tile, roofing, and insulation. Having boosted his position by investing in USG corporate debt during the financial crisis, Buffett has benefited from USG's recovery since the financial crisis.

This year, USG has responded favorably to the healthy U.S. economy, which has overcome global pressures that have held back construction and building activity throughout much of the rest of the world. With the company reporting increasing demand for its products in its most recent quarter, USG is still looking like a smart Buffett pick with long-term potential.

Buffett doesn't pay much attention to short-term results, so the fact that these four stocks are doing so well for him in 2016 won't really mean much to him. Yet these stocks are worth a closer look to see if you want to add them to your investment portfolio going forward.