Brian Feroldi, Sean Williams, and Matthew DiLallo
(TMFTypeoh)
Author Bio
Brian Feroldi has been covering the healthcare and technology industries for The Motley Fool since 2015. Brian's investing strategy is to buy high-quality companies and then let compounding work its magic. See all of his articles here. Follow @brianferoldi
Follow @brianferoldi

Studies show that small-cap stocks in general outperform large caps over the long term, which is why we Fools believe that nearly every investors should find space in their portfolio for at least a few small caps.

Of course, not every small cap is worth buying, and with so many to choose from it can be tough to narrow down your focus. To aid you in your search we asked three of our Foolish contributors to share a small-cap stock that they think is worth buying right now. Read below to see what they recommended and why.

Matt DiLallo: Units of Calumet Specialty Products Partners (NASDAQ:CLMT) have been absolutely crushed over the past year: 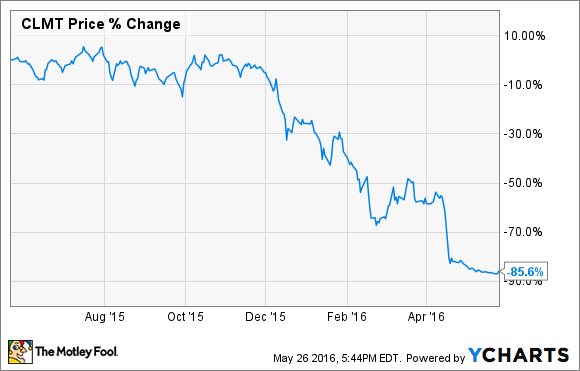 Fueling the sell-off have been the specialty hydrocarbon manufacturer's poor execution and its weak financial situation, which culminated in it suspending its quarterly distribution earlier this year. While investors hated that decision, it really was the right one for the company for the time being, because it frees up cash flow to repair its balance sheet and reinvest in its business.

What makes Calumet Specialty Products Partners an intriguing company right now is the fact that it is in the early innings of implementing a turnaround strategy. Under the guidance of new CEO Tim Go, the company has developed a three-point plan. First, Calumet wants to operate more efficiently by achieving higher utilization rates at its plants, process higher volumes of low-cost feedstocks, and upgrade its products to deliver higher margins. Second, it wants to opportunistically invest in "self-help" projects that offer quick paybacks. Finally, it plans to retool its portfolio by jettisoning assets that don't fit its core competencies while acquiring assets that do.

This plan, if successful, could turn this now small-cap company back into the mid-cap it was before its unit price collapsed last year. It's not a safe bet, but it is one that offers a pretty big payoff if everything goes according to plan.

Brian Feroldi: I love to invest in small-cap growth companies that are both profitable and disrupting their industry, which is why I like BofI Holding, Inc (NYSE:AX) so much. This online-only bank is profitable and growing fast, which is why I've added a few shares to my own personal portfolio. Better yet, shares are cheap right now, making it a good time to buy.

So how come this fast-growing stock is on sale? For the past several months, BofI has struggled with multiple allegations of wrongdoing. Management has gone to great lengths to refute all of the claims that have been lobbed against it, but that hasn't mattered much to the markets. Unfortunately, the company has been the target of a series of short attacks over the last few months, causing its share price to tank. BofI Holdings' share price has almost been cut in half since the October. 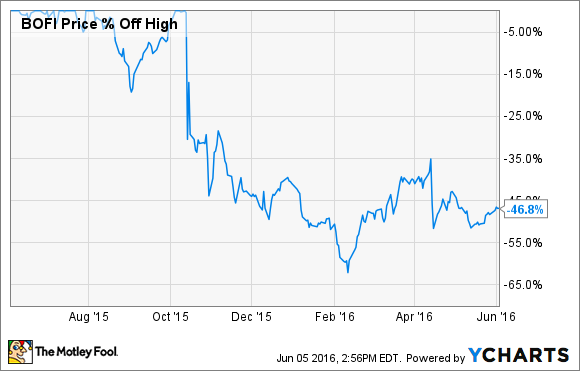 Thankfully, the company's growth hasn't slowed at all over time, showing that its growth story is still intact. Last quarter, diluted earnings per share skyrocketed by more than 64%, driven by a huge uptick in non-interest income from a deal that it struck with H&R Block Inc. Total assets increased by 40% to $7.7 billion, driven by 38% growth in deposits and 30% growth in its book of loans.

So why is BofI Holding's efficiency ratio so low? That's owed to the fact that it runs a branchless operation, which gives it a much lower cost structure. That allows it to pay out higher interest rates on deposits and offer attractive financing terms, which in turn fuel its strong growth.

While it's always possible that BofI Holdings shares could get hit by yet another short attack, with its shares trading for under 10 times forward earnings I think that the stock is cheap enough to compensate us for the risk. As long as the bank continues to grow like a weed and run an efficient operation, I can see myself being a shareholder for decades to come.

Sean Williams: It's been an absolutely miserable year for Primero Mining (NYSE:PPP) shareholders, with shares of the stock down 19% year-to-date. It's even more miserable when you realize that practically every other gold and silver mining stock is up at least 50% year-to-date. Yet, I'd suggest investors take Primero's recent woes as all the more reason to consider a position in this small-cap stock.

Primero Mining suffered through two setbacks earlier this year; however, both appear temporary. First, it shut down access to certain areas of its flagship San Dimas underground mine in Mexico in order to make safety improvements. Doing so caused a big production plunge for Primero and a huge spike in mining costs. Again, this is temporary.

The second issue ties in with Mexican authorities trying to invalidate the advanced pricing agreement of Primero's Mexican subsidiary, Primero Empresa Minera. This APA governs what portion of profits are subject to taxation, creating a temporary overhang for Primero and its shareholders. For what it's worth, Primero is fighting the decision by Mexican regulators.

Looking long term, however, we see a miner that has otherwise consistently grown production, and regularly reduced its operating costs. As I noted in more detail recently, it wouldn't surprise me one bit if Primero were able to get its all-in sustaining costs (an encompassing measure of full mining costs) below $850 an ounce by 2017 simply through cost improvements at Black Fox and boosting ore grades at San Dimas.

Primero also has its Cerro del Gallo mine under development in Guanajuato, Mexico, a region that already has ample mining infrastructure in place. This mine could max out production at around 95,000 gold equivalent ounces (GEO) per year, and has proven and probable reserves of 712,000 GEO. Primero believes estimated cash costs at Cerro del Gallo will be approximately $700 an ounce.

Altogether, we're looking at a gold miner with steadily growing production and shrinking costs that happens to be trading at a huge discount to future cash flow relative to its small-cap mining peers. I believe this is a smart small-cap stock to consider buying in June.