For struggling chip company Advanced Micro Devices (NASDAQ:AMD), 2016 is a critical year. AMD just announced the first graphics card based on its Polaris graphics architecture, a mainstream product meant to wrestle away market share from rival NVIDIA (NASDAQ:NVDA). Toward the end of the year, AMD is expected to launch Zen, its brand-new line of CPUs aimed at competing head-on with Intel (NASDAQ:INTC).

Shares of AMD have soared so far this year on the hope that the company is finally on the brink of turning itself around. But there are a few things investors need to know about AMD. 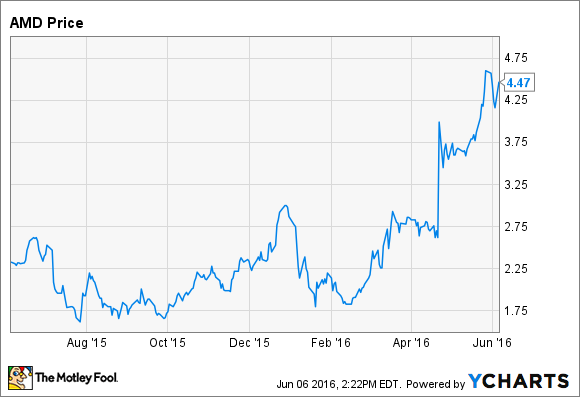 Given this record, it shouldn't be surprising that AMD's balance sheet is not particularly strong. At the end of the first quarter, AMD's cash balance stood at $716 million, on the low end of the company's target range of $600 million to $1 billion. Total debt stood at $2.23 billion, requiring AMD to pay about $40 million in quarterly interest. The company's book value, or assets minus liabilities, is now negative $503 million, and it's been in decline for the past five years. 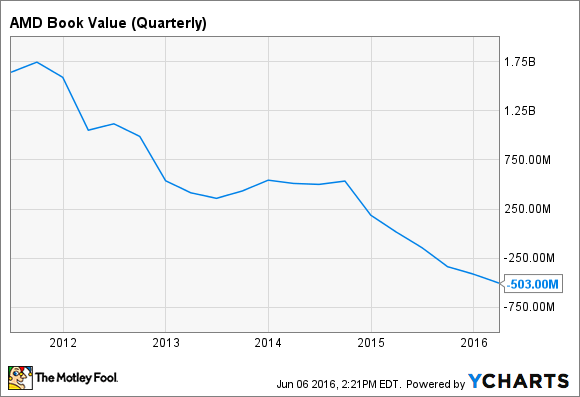 AMD's cash balance doesn't reflect two deals the company has made in recent months, so the situation isn't quite as bad as it looks. In October, the company announced a semiconductor assembly and test joint venture that will boost its cash reserves by $320 million. Another deal announced in April, in which AMD will license its x86 processor and system-on-a-chip technology to a joint venture in China, will bring in another $293 million. While these deals buy the company more time, AMD needs to return to profitability sooner rather than later.

Way behind in graphics

At Computex AMD announced the Radeon RX 480, its first Polaris graphics card. While NVIDIA is following the standard pattern of launching high-end cards first and lower-end cards later, AMD is going after the mainstream market right away by pricing the RX 480 at an aggressive $199. That compares to $379 for NVIDIA's more powerful GeForce GTX 1070 and $599 for the GTX 1080.

AMD was forced to do something bold with Polaris, because the company has fallen so far behind. For the past few quarters AMD has managed a unit share of roughly 20% in the discrete graphics card market. That's down from the 40% share the company enjoyed as recently as the second quarter of 2014. NVIDIA is AMD's only competitor, and it will take a combination of competitive products and aggressive pricing to win back customers.

Eschewing the high end for the time being carries risks for AMD. The market for graphics cards has been declining in terms of units for quite some time, partly due to major improvements in integrated graphics. But the number of enthusiast card shipments doubled in 2015, according to Jon Peddie Research, and that's an area where NVIDIA dominates. AMD is going against this major trend with the RX 480, and only time will tell if the company's strategy ultimately pays off.

Even further behind in CPUs

With Zen, AMD hopes to regain share from Intel in both the PC CPU and server CPU markets, something that will be easier said than done. In the PC market, the past few years have been unkind to AMD. According to data from PassMark Software, only about 20% of PCs in use today are powered by AMD processors, down from nearly 50% in 2006. As the PC market has contracted in recent years, AMD's position in the industry has consistently deteriorated.

Zen is supposed to bring major performance improvements that reduce or eliminate Intel's advantages. But convincing PC OEMs to offer models with AMD processors will not be easy. The average consumer looking to buy a laptop isn't checking CPU benchmarks online. The result of AMD's terrible performance in recent years has been the perception that its products are inferior to those of Intel. Even if Zen makes that untrue, changing the narrative and winning back considerable market share won't happen overnight.

AMD is in even worse shape in the server CPU market. The company's market share is basically null, and with Intel's post-PC strategy centered on cloud computing and data centers, AMD will be battling a determined foe with far greater resources. A comeback certainly isn't impossible for AMD, and even modest market-share gains would likely be viewed as a success. But the odds are not in AMD's favor.