What: Shares of Overstock.com (NASDAQ:OSTK) rose 16.9% in May 2016, according to data from S&P Global Market Intelligence. Today, shareholders of the online shopping portal can look back at 42% gains since the beginning of 2016.

So what: The month started with a respectable first-quarter report, showing a 4% year-over-year revenue boost and a large earnings jump. Overstock shares shrugged off the news and soldiered on at a fairly stable price level for the next two weeks.

The big gains started on May 16. One huge trade for nearly a million Overstock shares was triggered early in the morning, consuming about six days' worth of the stock's average daily trading volume.

The big trade didn't spark a short squeeze or massive price leap. Indeed, share prices fell slightly at first and closed only 4.6% higher that evening. These unusual characteristics made the trade look like a prearranged deal at fixed prices, not one conducted in the open market.

Starting from there, share prices climbed higher in consistent but small steps until May 26, when analyst firm Maxim Group started covering Overstock with a fresh buy rating and a $20 share price target. The company didn't share any significant news during this shareholder-friendly period, other than the largely ignored earnings report at the very beginning. 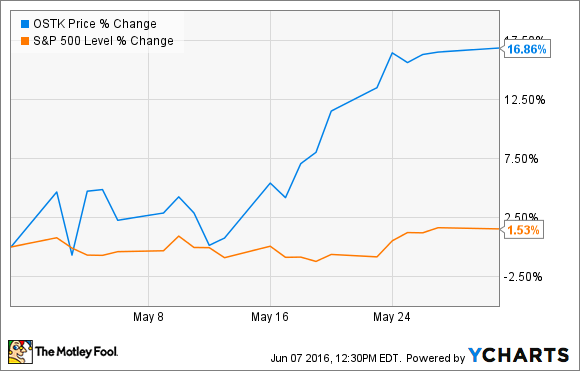 Now what: Despite the dramatic rise in 2016, Overstock shares still trade some 27% below 52-week highs.

The company is operating under new leadership, as founder and longtime CEO Patrick Byrne is taking medical leave from that stressful post. Under acting CEO Mitch Edwards, Overstock is looking into some new business ideas far outside the traditional e-commerce market.

For example, Overstock plans to run the first stock exchange where investors can make their stock trades in bitcoin rather than dollars or euro. The market itself would be organized around the same data structure that bitcoin uses. You can already use that digital currency to pay for ordinary merchandise from Overstock.com. The company was one of the first decent-size retailers to accept that payment option.

It's heady stuff, and interesting for the long term. If bitcoin and related technologies go mainstream in a big way, Overstock would be part of the first charge into this brave new payment world. But that remains to be seen, and our next digital hyper-currency could be one of bitcoin's many competitors -- or something we haven't even heard of yet.

So Overstock remains an online retailer at heart until that sea change comes. That has not happened yet, and maybe it never will. But the stock can act as a good way to play the potential bitcoin revolution, if that's where you see the future of payment tools going.

How Overstock.com, Inc. Gained 17% in May @themotleyfool #stocks $OSTK Next Article
Current