Biogen Inc. (NASDAQ:BIIB) reported today that its next-generation drug, anti-lingo-1, or opicinumab, failed to reverse the effects of multiple sclerosis.

Opicinumab was being studied as a next-generation multiple sclerosis medicine that could reverse the disease by repairing damage to myelin, a protective sheath that encapsulates nerve fibers and increases the speed at which nerve signals are communicated.

Currently, medicines used to treat multiple sclerosis can slow the progression of the disease, but they can't reverse it. If opicinumab's study had succeeded, it could have transformed disease treatment, becoming a multi-billion dollar blockbuster drug in the process.

The results cast doubt on opicinumab's future, but management is still crunching the data to see how best to refine a future trial that could be more likely to succeed.

An opicinumab success could have significantly boosted the company's future prospects for sales and profit, but just because opicinumab's future is unclear doesn't necessarily mean that long-term investors should hit the sell button.

Biogen remains the dominant player in the multiple sclerosis treatment market, a market that's valued at $17 billion annually. And, the company's insulated its market share by recently launching longer-lasting multiple sclerosis treatments that reduce patient burden. As a result, Biogen's sales and profit are still climbing. For example, revenue grew 7% to $2.7 billion, and EPS improved 25% to $4.79 in the first quarter. 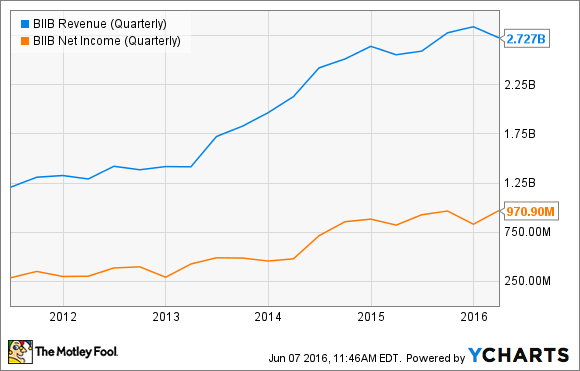 Since Biogen's sales and profit are growing and it remains a giant in multiple sclerosis treatment, I think long-minded investors might be better off thinking of today's disappointing news as an opportunity to buy a top-tier biotech on sale. After all, today's drop means that investors can pay less than 13 times next year's EPS estimates to buy shares, and that could be a bargain.