Based on investors' initial reaction to Intuit's (NASDAQ:INTU) fiscal 2016 third-quarter earnings results, many were expecting more from the QuickBooks and TurboTax provider. Despite beating vaunted analyst expectations and boosting its online subscriber base -- an ongoing focus of CEO Brad Smith's transformation efforts to shift business to the cloud -- Intuit stock declined about 2% following its solid quarter.

It didn't take long for investors to overlook the supposed weaknesses of Intuit's quarter, however. As it stands, the stock is bumping up against its 52-week high of $108.68 a share. This stock price run is great for shareholders, but is it too late for investors still on the sidelines? The answer is yes, for a few reasons, until Intuit is able to show signs of life in a couple of key areas. 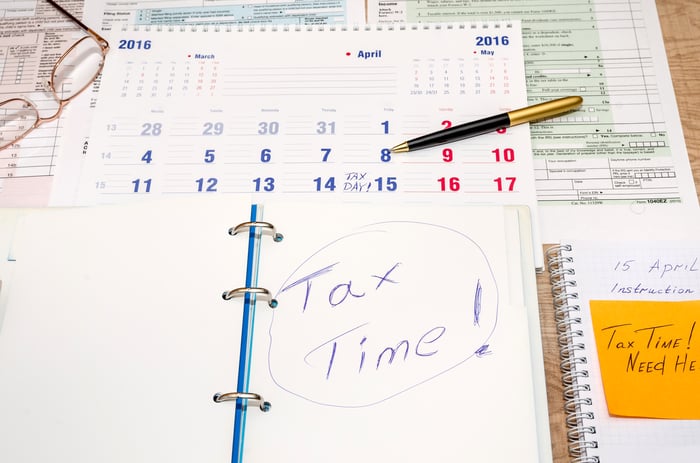 Generally, when a company reports better-than-expected revenue and earnings than Wall Street estimates, particularly when the results are improvements year over year as well, shareholders are rewarded with a stock price pop. Intuit accomplished both, which is likely the reason its stock seems to have gained favor among investors over the past couple of weeks.

Analysts had expected revenue of $2.25 billion and non-GAAP (excluding one-time items) earnings per share (EPS) of $3.19, both of which would have been better than the year-ago quarter. Intuit pleasantly surprised with an 8% jump in sales to $2.3 billion and adjusted EPS of $3.43, an impressive 20% improvement compared to fiscal 2015's third quarter.

Virtually every one of Intuit's key segments grew revenue year over year last quarter, including a 37% jump in QuickBooks online revenue, and increases in both online payments and payroll sales -- though not everything turned up rosy for Intuit last quarter, despite its stock price nearing year-long highs.

Intuit naysayers point to its "meager" 45% jump in QuickBooks online subscribers in Q3 as a troubling sign of things to come. The problem is investors and pundits have become used to Intuit reporting 50% plus year-over-year subscriber growth. That, combined with Smith's forecast of a 37% to 40% increase expected this fiscal year, is an early indication that Intuit's market is becoming saturated.

As it stands, Intuit's TurboTax is the runaway leader in online tax filing, accounting for an estimated 70% of electronically filed returns last year. Though Intuit's online consumer tax preparation market dominance remains, big boys including H&R Block (NYSE:HRB) are fighting for a piece of its pie.

H&R Block is still preferred by many brick-and-mortar businesses, which continue to comprise its astounding 15% share of the entire tax marketplace. But H&R Block intends to fight Intuit for e-filers, and its online solution matches Intuit's TurboTax features and offers its web users something TurboTax can't: a face-to-face consultation with a tax pro should hiccups arise with a return.

Both customer saturation causing a slowdown in QuickBooks subscriber growth and growing competition for TurboTax are legitimate concerns, which is why it's necessary to get solutions including Intuit's newly named ProConnect jump-started. ProConnect is a rebranding of Intuit's suite of solutions in an effort to "create greater value for tax and accounting professionals."

Marketing value-added services for Intuit's many small-business owners and tax pros could help give it the boost it needs to diversify its revenue sources further. Currently, Intuit garners 70% of its revenue from its consumer tax group. While Intuit's small-business group sales -- thanks to QuickBooks growth, albeit slower than expected -- climbed 12% to $580 million, ProConnect sales were one of the weak spots, declining 3% last quarter.

Intuit's slowing subscriber growth, increasing competition, and its lack of revenue diversification are by no means overly concerning. They're to be expected. However, in light of the fact that Intuit's stock price is already at analysts' targets and a year-long high, hold it if you own it. But for new investors, Intuit offers too little short- to mid-term upside at current levels to warrant buying in.