At 4.1%, Philip Morris International's (NYSE:PM) dividend is quite tempting. But much like its cigarettes, it may not be what's best for you. That's because when you invest in Philip Morris, or any cigarette stock for that matter, you're investing against a major trend: the decline in smoking rates in many areas of the world. The impact of this can be seen in Philip Morris' cigarette sales volumes, which have declined in each of the past three years.

In my experience as an analyst and market-beating portfolio manager, I find it's much easier -- and profitable -- to invest in businesses that are positioned to benefit from powerful long-term trends. In this regard, Philip Morris investors may wish to consider swapping their shares for those of Starbucks (NASDAQ:SBUX).

At 1.4%, Starbucks' dividend is currently significantly lower than that of Philip Morris. Yet unlike the cigarette maker, Starbucks -- and its shareholders -- are profiting from two major growth trends. The first is a multi-decade increase in coffee consumption around the world. 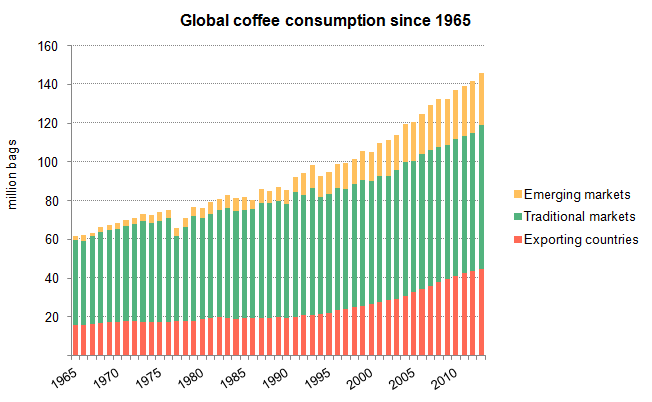 In fact, global demand for coffee is likely to rise nearly 25% from 2015's levels by 2020, according to the International Coffee Organization. Developing nations are leading the charge, as coffee drinking is becoming increasingly popular in massive, but still largely untapped, markets such as China and India.

Starbucks is moving quickly to capitalize on this profit opportunity. The coffee king plans to open 500 cafes annually in China over the next five years. During Starbucks' 2016 shareholder meeting, CEO Howard Schultz went so far as to say: "I wouldn't be surprised if one day our business in China is bigger than the U.S. market. It's that big an opportunity."

But it's not only coffee that will drive Starbucks' growth in the years and decades ahead; the company is also well positioned to benefit from the rising popularity of tea. Starbucks is rolling out its Teavana line of beverages in India this year -- a massive market that management believes holds tremendous potential for growth. "Starbucks will have a major business in India and the number of stores here will rival many of the large markets we have around the world," said Schultz.

Yet another intriguing market for tea can be found right here in the United States. The U.S. market for tea has grown exponentially over the last 25 years -- from less than $2 billion in 1990 to an estimated $11.5 billion in 2015, according to the U.S. Tea Association.  Even better, plenty of growth still lies ahead, with total retail sales for tea expected to grow at a compounded annual growth rate of 5% to 6% over the next five years, as per the Beverage Marketing Corporation.

Within the past year, Starbucks has sold more than $1 billion of Teavana beverages in the U.S., representing year-over-year growth of 11%. To capture more of this fast-growing market, Starbucks just recently announced a new partnership with Anheuser-Busch InBev (NYSE:BUD) to launch the first Teavana ready-to-drink teas in the United States. The deal will give Starbucks access to Anheuser-Busch's massive wholesaler network, and Anheuser-Busch will lead the production, bottling, and distribution of Teavana RTD beverages to retailers nationwide. As such, this deal has the potential to significantly increase Starbucks' and Anheuser-Busch's share of the U.S. premium RTD tea category -- a market that already exceeds $1 billion in annual sales.

All told, Starbucks gives its shareholders many ways to win. With the long-term growth of both coffee and tea consumption set to propel its revenue and earnings higher in the decade ahead -- and with a payout ratio of only around 40% -- Starbucks is well positioned to grow its dividend at a rate of 10% to 15% annually for the foreseeable future. Contrast that with Philip Morris, whose declining sales and profits -- and sky high payout ratio of more than 95% -- could make it difficult for the company to maintain its dividend, much less raise it in the coming years. As such, Starbucks appears poised to significantly outperform Philip Morris on a total return basis (share price appreciation plus dividends) in the years ahead. Investors in the cigarette titan may wish to consider swapping their shares for those of the coffee king.