The S&P 500 is now within one percentage point of its all-time high closing price (2,1030.82), achieved on May 21, 2015. Stock market bulls may find the proximity of that milestone encouraging, but Goldman Sachs is taking the opposite view, warning clients that the risk of a significant pullback in equity prices is "elevated."

("Drawdown" is an industry term that refers to the maximum peak-to-trough loss, within a specific time frame -- typically a month or a quarter.)

I have no idea what the stock market will do in the near term, nor does Mueller-Glismmann (nor anyone else at Goldman Sachs, for that matter), but I do think it behooves investors to take a guarded attitude and make conservative long-term return assumptions.

For market participants who like to think in terms of a multiyear time horizon (i.e., "investors"), Goldman put together an interesting chart that shows the drawdowns greater than 20% over the past 50 years across four major developed equity markets: The U.S. (S&P 500), the U.K. (FTSE All-Share), Germany (DAX), and Japan (TOPIX). I've reproduced part of the graph below, beginning in 1979 (i.e., roughly the past quarter-century): 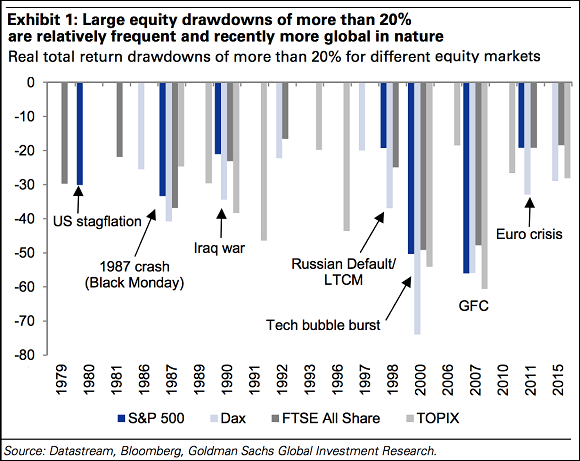 Image source: Based on chart from Goldman Sachs.

What are we supposed to conclude from this chart? Here's one fundamental observation (which is even more clear from the full 50-year chart): Significant stock market declines have become more tightly correlated across developed markets over time (the conclusion is the same if you included emerging markets, incidentally).

You can see this in the greater frequency of groups of different color verticals bars since the Russian default/LTCM crisis of 1998 (which followed a crisis in Asian emerging markets in 1997).

For investors, this is a concern, as it suggests that the benefits of geographical diversification have been reduced over time (this is not a new problem, but things have not improved since it was first identified).

That is particularly problematic when the major developed world economies and markets are facing similar challenges. As Mueller-Glissmann points out:

With equities at the upper end of their recent range, we believe equities offer poor asymmetry with little return potential and potential for more frequent and larger drawdowns. And while "buying the dip" has worked since 2014, investors are increasingly concerned about the recovery catalyst in the next drawdown as central bank capacity is increasingly questioned and global growth and inflation remain stubbornly low.

During the S&P 500 drawdowns in August 2015 and at the beginning of 2016, bonds provided a less effective hedge with monthly returns of a standard 60/40 portfolio dipping to -5 percent, much larger drawdowns than during the Euro-area crisis and the global "growth scare" in October 2014.

How can investors respond? By remaining focused on the long term, over which time frame diversification is less critical. What does this mean in practice? That they have sufficient liquidity (i.e., "emergency funds") to ride out episodes of short-term volatility without having to sell assets at unfavorable prices in order to raise cash. Once you've seen to that, continue investing with regularity in order to take advantage of, rather than simply suffer from, lower prices.

Statistic of the day

"Only two U.S. companies have produced at least $5bn of net income in each of the past 14 quarters. One is Apple, the other is Wells [Fargo]." ("Branched out," Financial Times, June 7)