While it's generally difficult to say exactly why a stock dropped on a particular day, you can often nevertheless tease out the primary culprits. In the case of Chipotle Mexican Grill (NYSE:CMG), which saw its shares fall more than 3% on Thursday, there appears to be two explanations.

In the first case, the results of a consumer poll released on Thursday showed that Chipotle is no longer the preferred brand among fast-casual Mexican restaurants. After topping the Harris Poll for three years in a row, it didn't even rank in the top four this year.

The list was led by Moe's Southwest Grill, which is owned by the same company that operates Auntie Anne's and Cinnabon. Moe's performance is notable given that it has only 650 locations compared to Chipotle's more than 1,900.

The three other fast-casual Mexican restaurants that outranked Chipotle were Taco Bell, Qdoba, and Baja Fresh. Taco Bell is owned by Yum! Brands, an international company that also operates Pizza Huts and KFCs. Qdoba is a subsidiary of Jack in the Box. And while Baja Fresh was once controlled by Wendy's, it was sold a decade ago to a group of investors who also run the Sweet Factory.

Suffice it to say that Chipotle's performance in this year's Harris Poll reflects the damage to its brand from food-borne illness incidents that struck a number of its locations last year. Its shares since the crisis erupted are down roughly 40%. 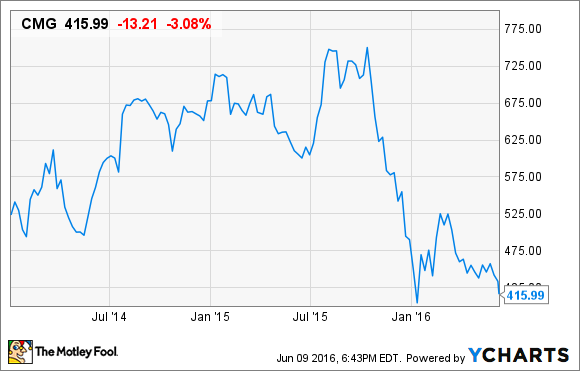 A second possible explanation for the drop in Chipotle's stock price on Thursday relates to another study. This one cuts to the core of the burrito chain's value proposition as a healthy alternative to fast food.

Entrees at fast-casual chains such as Chipotle and Panera Bread have as many as 35% more calories compared to entrees at fast-food chains, according to researchers at the University of South Carolina's Arnold School of Public Health.

Two things are worth noting here. The first is that the study looked at entrees, not full meals. If you include, say, French fries from McDonald's in the equation, the results would differ. At Chipotle, meanwhile, it's probably fair to say that most people are content with only a burrito, an order of tacos, or a burrito bowl.

On top of this, while the results of the study were covered in the media on Thursday, it was published last month. As such, it seems unlikely that this was the primary culprit for the drop in Chipotle's share price. The media attention surrounding the results today more likely served to fuel negative sentiment ignited by the first study, which suggested that the burrito chain has fallen out of favor with consumers.