Peter Lynch urges people to "invest in what you know." This is sage advice, given his success over the years.

As manager of Fidelity's Magellan mutual fund, Lynch achieved over 29% annualized returns over 13 years. Much of his investing strategy was tied to following trends in his own family's life. In his book, One Up on Wall Street, he encouraged individual investors to hunt for stocks in the industries they work in, or purchase companies that sell products and services they utilize and understand.

As a parent of one- and three-year-old children, I'm beginning to understand a few things very well. Hugs, smiles, giggles, diapers, tantrums, and attention-seeking are the norm in my household. So are attending birthday parties, and it is here where my eyes opened up to an entirely new world -- and two potential investments.

The happiest toys on Earth

When thinking about businesses that will succeed over the long haul, Disney (NYSE:DIS) is one that comes to mind. The Disney brand is full of characters that are adored today, were adored 50 years ago, and will likely be adored 50 years in the future. With the additions of the Pixar, Marvel, and Star Wars franchises, movie-goers and investors have plenty to look forward to.

A 93-year-old toy maker is hoping to piggyback off the success of Disney. On Jan. 1 of this year, Hasbro (NASDAQ:HAS) began its partnership with Disney to be the exclusive manufacturer of Disney's princess dolls. The deal with Hasbro was at the expense of Mattel (NASDAQ:MAT), which had held the rights to sell Disney's dolls since 1996.

How big is the princess business to Disney?

According to Bloomberg, Disney Princess merchandise is second only to Mickey Mouse in terms of profitability. And this excludes what might be the most valuable princesses of all: Elsa and Anna from Frozen. Frozen is categorized independently from the Disney Princess franchise. In 2014, the first full year after Frozen was released, the NPD group reported Frozen as the top toy brand in the United States, with $531 million in sales of dolls, dresses, and other toy properties. 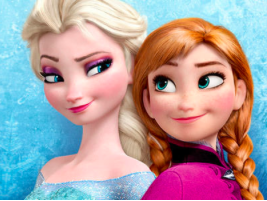 In addition to Disney Princess and Frozen dolls, Hasbro is also licensed to sell toys for Marvel, Star Wars, and Disney Junior. The licensing deals are proving to be a boon for Hasbro shareholders. You can see this in Hasbro's latest quarterly performance:

Over the last year, Hasbro stock has returned more than 20%, and Disney's licensing business should prove lucrative for Hasbro for years to come. However, the company didn't just get to where it is on the back of Disney. Timeless brands such as Nerf, Monopoly, Transformers, Play-Doh, and My Little Pony have helped provide Hasbro investors with market-beating returns as well:

At first glance, Hasbro stock doesn't look cheap, trading at 23 times earnings versus an average of 18 over the last five years. An investment in Hasbro yields a dividend payout of 2.4%, but its recent price appreciation has caused the yield to decrease from a five-year average of 3.3%. Yet, given its initial success with its Disney partnership, the higher price may be justified.

It didn't take long after my children were born for me to realize the most popular gift from other parents: Carter's brand onesies and pajamas. Carter's reputation of providing quality baby clothing at an affordable price has helped the company achieve tremendous success.

Anecdotal evidence of "every piece of clothing we get is Carter's" is usually not a good investment thesis. However, it is a great starting point from which to begin research, and as it turns out, my hunch that Carter's dominates the baby outfitting market was confirmed.

Carter's is the leading brand of children's clothing, gifts, and accessories in North America. The company sells more than 10 products for every child born in the United States. Carter's commands 17% market share, twice that of its next largest competitor. It holds 25% market share in the 0-2-year-old category and 40% market share in sleepwear. No other clothing retailer can claim numbers like these. And the best part is that, unlike the teen retail market, Carter's average consumer is not fickle about fashion.

Like Hasbro, Carter's brand evokes a rich history. The company was founded in 1865 and stayed in the Carter family until 1990. It also owns the familiar OshKosh 'B Gosh brand, which has been a staple of children's clothing for 121 years.

Most importantly for investors, the long history of Carter's has not translated into stagnant growth. Carter's has increased revenue and earnings per share an annualized 11.4% and 12.8%, respectively, over the last five years. The stock price has followed, delivering investors a total return of 243%, nearly quadrupling the S&P 500 over the same period.

As many parents can relate, spending money on children is a given. But paying attention to where that money is spent can unlock investment opportunities.