Fertilizer stocks present an intriguing opportunity for investors. On one hand, your investment thesis could be as simple as looking at global population growth, and concluding that agricultural nutrients will be critical to enabling increased food production. On the other hand, the industry can't seem to find its footing, with every hint of optimism seemingly being overpowered by complex and quickly changing market conditions in recent years.

Stubbornly persistent headwinds are certainly reflected in the recent performance of The Mosaic Company (NYSE:MOS) stock, which is down 63% in the last five years: 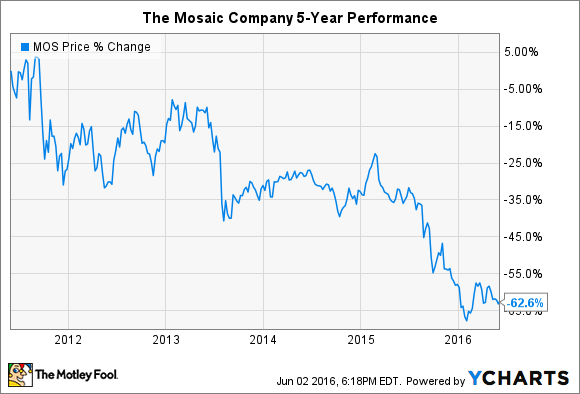 While markets for the three main agricultural nutrients -- potash, phosphate, and nitrogen -- will likely stabilize eventually, investors may want to remain cautious before betting big on a recovery in the near future. Here are three reasons The Mosaic Company's stock could fall, which will be followed by an article arguing the opposing perspective, in the following weeks.

In 2015, The Mosaic Company generated 48% of its revenue from phosphates, 26% from potash, and the remaining 26% from its international distribution segment, which serves as a logistical arm to support internal production operations, and to market products from other suppliers. The company is one of the largest producers of phosphate and potash in the world, responsible for 14% and 13%, respectively, of global production.

That's a great strength for investors when fertilizer markets are booming -- as demonstrated by record-high stock prices of more than $150 per share during the last favorable industry cycle in 2008 -- but it also handicaps the company's operational performance when markets are depressed. Unfortunately, today's markets are very depressed. Phosphate (pictured below) and potash prices are sitting at multi-year lows, and have continued to slide lower in 2016. This has forced Mosaic and other phosphate producers to increase volumes to maintain revenue levels; but that can be a short-sighted strategy. Why?

Selling higher volumes can allow Mosaic to insulate itself from lower selling prices in the near term, but it can also create swelling inventories in longer time periods. In the first quarter of 2016, phosphate (pictured below) and potash inventories from U.S. producers were markedly higher than the five-year average: This is also reflected in Mosaic's SEC filings, which show that the company increased phosphate production 3.5% from 2014 to 2015. It was a little more proactive in responding to potash markets -- reducing volumes of mined ore 8.5% between 2013 and 2015, while managing to increase finished-product volumes by 5% in the same period. Nonetheless, Mosaic reduced 2016 volume guidance for phosphate and potash products in early May. Market conditions appear to be finally catching up.

Most fertilizer companies have reduced their dividends in recent quarters in response to challenging market conditions. Mosaic is a rare exception, so far deciding to hold its quarterly payout at an all-time high of $0.28 per share. While the dividend may be sustainable, investors may want to begin entertaining the idea that management will reduce the quarterly payout out of caution, especially given the stubborn market conditions discussed above.

The simplest investment thesis doesn't always prove reliable. There's no doubt that agricultural nutrients will hold a critical role in enabling increasing food production in the coming decades; but as fertilizer stocks have come to realize, factors ranging from a strong U.S. dollar to depressed grain prices can collide in unpredictable ways. It may be difficult to believe, but Mosaic stock could fall even further before investors enjoy a recovery.