Please ensure Javascript is enabled for purposes of website accessibility
Log In Help Join The Motley Fool
Free Article Join Over 1 Million Premium Members And Get More In-Depth Stock Guidance and Research
By Travis Hoium - Jun 9, 2016 at 8:06AM

Canadian Solar's cost projections show why it's hard to make money in the solar industry today. The solar industry's growing adoption rate has been driven primarily by the reduction in the cost of solar panels from over $100 per watt in 1978 to around $0.50 per watt today. But the industry's biggest players aren't done cutting costs yet.

Canadian Solar (CSIQ 3.27%) has its sights set on further reductions that it hopes will make the company more profitable and grow its potential market. And the costs they're talking about are getting crazy, but they may not lead to the level of profitability you might think they would.

In a presentation in May, Canadian Solar said it had achieved costs of $0.41 per watt for solar panels produced in China. As you can see below, that's down 69% from the second quarter of 2011, and the cost cuts aren't about to stop. 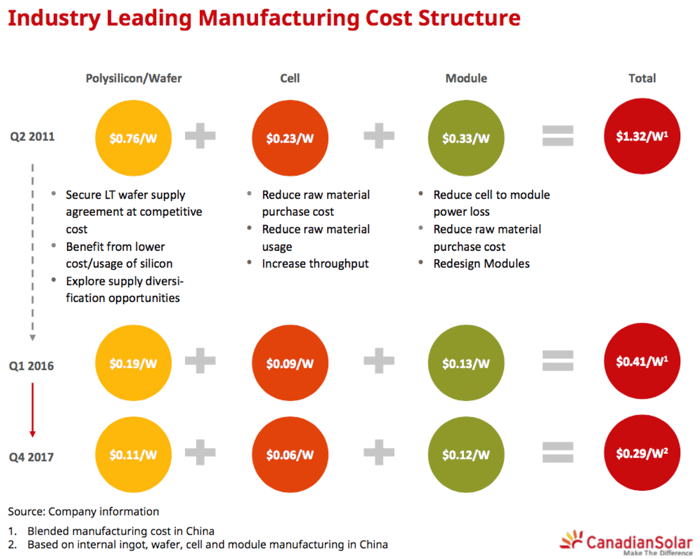 By the end of 2017, the company expects costs to fall to $0.29 per watt. That's incredibly cheap and should expand the market for the solar company. But it's also a big reason Canadian Solar could struggle financially.

How falling costs can be bad in solar

While falling costs are good if module prices stay flat, the trend in solar has long been that module prices trend lower with costs, and manufacturing gross margins stay relatively flat. And that could be a problem for future profitability.

The chart below shows the gross margin generated per watt produced in Q2 2011 and Q1 2016, and the projected margin in Q4 2017 given cost projections. You can see that Canadian Solar is making less and less profit for every watt it produces.

This dynamic has played out over and over again in solar. The next chart shows the net income from Canadian Solar, Trina Solar (NYSE: TSL), and Yingli Green Energy, three of the largest solar manufacturers in the world. As they've all rapidly increased production, they've also seen income stagnate or, in Yingli's case, even reported massive losses. 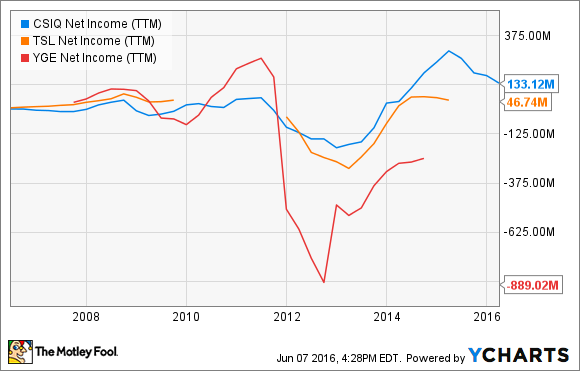 Falling costs is a double-edged sword. It grows the market potential for these companies, but if lower costs don't lead to expanding margins, eventually profitability falls as well. That's why solar companies have been looking to add value in more parts of the value chain, like building projects or moving more component manufacturing to the factory floor.

The biggest challenge for Canadian Solar and Trina Solar going forward will be figuring out how to grow production and margin per watt at the same time. They're making progress by moving into project development, but I think there will need to be a larger move into designing more complete solutions from rooftop solar systems to large utility projects. Then they'll be able to capture a larger piece of the pie rather than seeing profits shrink as production grows, which isn't a long-term path to profitability in the solar industry.