Plug Power (NASDAQ:PLUG), a leader in providing fuel-cell systems to the material handling market, is close to turning the page, according to management. Whereas it has failed -- in its 17 years -- to report profits, management believes it's on the cusp of a new chapter, one whose plot is driven by profits. Let's take see if the company can remain healthy going forward.

Are investors finally going to see the love? With echoes of broken promises still ringing in their ears, they're certainly justified in doubting management's claim of reaching breakeven on an EBITDA basis by the end of fiscal 2016. In 2013, CEO Andy Marsh suggested that the company would reach the same goal in 2014. He was wrong. The company posted an EBITDA loss of $84 million in 2014, and in 2015, it reported a loss of $52 million, according to Morningstar.

Belief that the company will meet Marsh's goal is further compromised by the company's inability to even post a gross profit, even as the company has managed to expand its gross margin over the past five years. In addition to selling its GenDrive fuel-cell units, the company prides itself in being a one-stop solution for companies interested in transitioning to a hydrogen-based solution. Unfortunately, what the company lauds -- its service offerings -- comes at great expense. Accounting for a gross margin loss of 63.7% in 2015, services performed on fuel cell systems and related infrastructure, in fact, is the company's costliest source of revenue.

The company's extensive operational expenses are another factor affecting profitability. For example, research and development spending has increased 379% from 2013 to 2015. Management believes, in the long term, that doing so will be worth it. Striving to vertically integrate, the company is developing air-chilled and liquid-chilled fuel cell stacks. If successful, it would reduce its reliance on its main supplier Ballard Power Systems (NASDAQ:BLDP) and expand margins on its GenDrive units.

Too much ebb, not enough flow

So far, Plug Power's financial fortitude seems questionable. Will the company's cash flow mitigate concerns? No, not really. For some time now, Plug Power has been unable to consistently grow its operational cash to cover spending.

Ever optimistic, management has set a target of using less than $20 million in operating cash flow for fiscal 2016. This would be a substantial improvement over last year, and it appears that the company is off to a good start. In the first quarter of fiscal 2016, the company reported $6.9 million in negative cash flow -- more than a 50% improvement year over year.

Management doth protest too much

It's reassuring to see that the company isn't drowning in debt, but it comes at the expense of shareholders, who are suffering from dilution. Where the company had 76 million shares outstanding in 2013, the number grew to 176 million by the end of 2015. 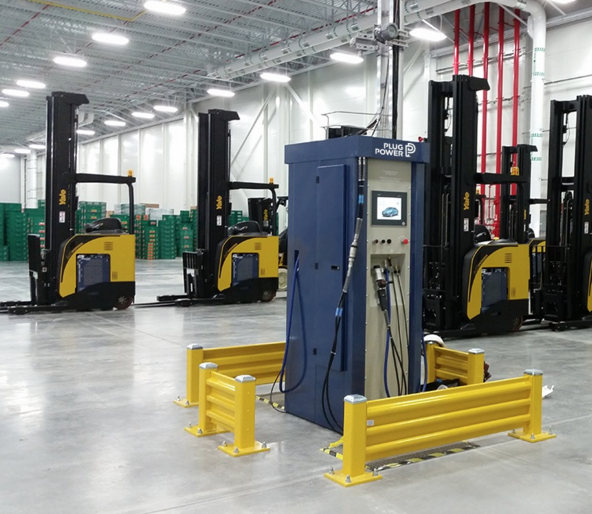 Management, however, claims to be holding back on another equity raise. On the company's Q1 earnings conference call, Marsh stated, "I foresee no new equity raises that will be needed." Take it with a grain of salt, though; management's forecasts are not always the most accurate.

Elsewhere in the C-suite, we hear more protestations over dilution. Later in the earnings call, CFO Paul Middleton addressed the company's power purchase agreement (PPA) sites and, in doing so, affirmed Marsh's claim: "To deploy our planned PPA sites, it will require approximately $45 million to $50 million to finance these new deployments in 2016, and our goal here is to do so without having to restrict cash or raise equities to deploy this pipeline."

With $64 million in cash on hand, the company seems capable of achieving this deployment without diluting shareholders. But management's refrain on the conference call of not foreseeing a need to raise equity seems a little too earnest -- as if an equity raise is looming beyond this calendar year.

Failing to recognize cash inflows from operations and choosing to not raise equity, the company resorted to another measure to keep things running. During the first quarter, it issued approximately $24 million in short-term debt. Had it not, the company would have eaten further into the cash from its latest equity raise. Though that's not catastrophic, the company's need to finance its operations through issuing debt underscores the precarious position it finds itself -- insufficient generation of operational cash and the looming possibility of further dilution.

Having taken a look at the company's profitability, cash flow, and debt, it seems that the company is not in the best health. This company's narrative is surely far from over, but claims of an auspicious next chapter seem doubtful. Nonetheless, for the balance of 2016, it will be interesting to see how the company answers several questions: Can it reach break even on an EBITDA basis? Can it limit its operational cash outflow to under $20 million? Can management regain the trust of its shareholders? We'll see.