What: Shares of the nation's fourth largest ethanol producer rocketed 40% higher in May. And although Pacific Ethanol (NASDAQ: PEIX) rallied without any specific catalyst, beaten down investors saw a few glimmering reasons optimism. 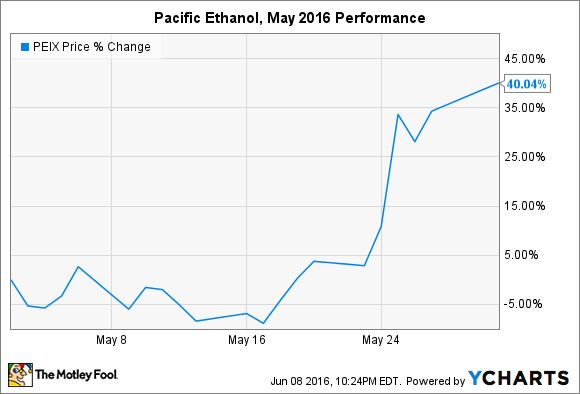 So what: Investors should acknowledge the obvious: the ethanol market remains challenged thanks to low commodity prices. Cheap corn has significantly lowered input costs for producers, but other headwinds persist. Low corn prices have reduced the value of biomass byproducts relied on to offset production costs, while multi-year low gasoline prices have resulted in multi-year low ethanol prices.

But good news continues to roll in. In March the U.S. Energy Information Administration announced that the United States exported over 800 million gallons of ethanol in consecutive years for the first time ever, which supports a small (roughly 5.5% of total production) but growing destination for American ethanol producers.

Low gasoline prices throughout the United States have helped to push demand well past five-year highs. The trend hints that 2016 gasoline consumption will be higher than the 137 billion gallons gobbled up last year, which would support at least 13.7 billion gallons of ethanol production. When combined with record growth in exports to begin the year, fed by Brazil and newcomer China, ethanol producers could begin to see a market recovery as early as the current quarter. Prices have surged to a six-month high in early June.

Now what: That all bodes well for Pacific Ethanol, which increased production 153% in 1Q16 compared to the year ago period. As prices continue to rise, and the company continues to increase output, investors could be in for a long-awaited recovery in a stock that has fallen to levels last seen in 2013. Whether you think highly of ethanol or not, it's worth noting that the company's book value at the end of 1Q16 stood at over $9 per share -- a 50% premium to current prices.