The past several years have been brutal for many apparel retailers, due to the rise of "cheap chic" rivals like Zara and a decline in mall traffic caused by the rise of e-tailers. Many retailers got trapped in a loop of slashing prices to boost sales, which caused margins to plunge.

But there have been a few rare winners in this troubled industry like American Eagle Outfitters (NYSE:AEO). I generally don't like apparel retailers, but I recently picked up shares of American Eagle for four simple reasons.

2. The rise of Aerie

American Eagle's 6% comps growth last quarter included 4% growth at its namesake stores and 32% growth at its Aerie lingerie and activewear stores. That compares to 7% growth at AE and just 12% growth at Aerie in the prior year quarter. AE attributes Aerie's rapid rise to a strong collection and its well-received marketing campaign, which uses untouched photos, relatable models, and the catchy "I am Aerie real" slogan to attract younger female shoppers. Digital sales generated 30% of Aerie's total sales.

Aerie's campaign has often been called an "anti-Victoria's Secret" approach, which frowns on the latter's hypersexualized ad campaigns featuring airbrushed models. The lingerie giant, which is owned by L Brands, posted just 2% comps growth last quarter, down from 3% growth a year earlier.

Victoria's Secret controls over 60% of the global lingerie market, but it might lose domestic market share if Aerie keeps growing along with other newer entrants in this space. Aerie is still a small brand with a single-digit share of the U.S. market, but it could evolve into a pillar of growth for the company in the near future.

Like many other apparel retailers, AE is shrinking down its brick-and-mortar footprint to deliver more high-margin sales through e-commerce channels. However, AE's brick-and-mortar reduction is soft and gradual -- it plans to reduce its total store count by less than 2% for the full year.

Compare that to Gap, which abruptly announced last June that it would close 175 of its North American stores, leaving it with just 500 regular stores and 300 outlet locations. Ralph Lauren plans to shutter 50 stores, or 10% of its entire retail footprint, over the next few quarters. Those big cuts are risky, since they could cause steep year-over-year sales declines if direct-to-consumer sales fail to pick up the slack.

American Eagle is balancing closures with direct sales growth more gracefully than those rivals. During last quarter's conference call (as transcribed by Thomson Reuters), AE Brand global brand president Chad Kessler noted that "although mall traffic was soft, stores held up well and delivered a positive comp." AE's total digital sales, which account for about a fifth of its entire business, rose 20% annually. 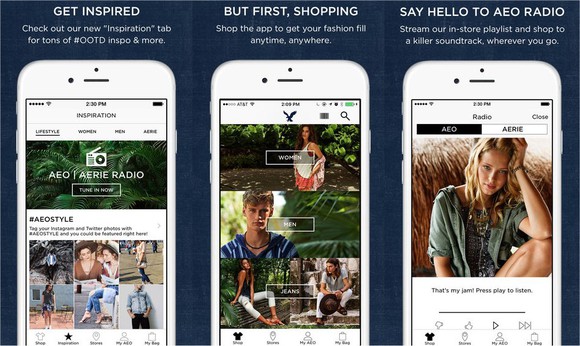 AE's gross margin improved 170 basis points annually to 39.2% last quarter, thanks to favorable occupancy and product costs. Net income grew 39% to $40.5 million, or $0.22 per share, and beat expectations by four cents. The company also expects margins to continue rising in the near future although the environment remains competitive.

Shares of American Eagle trade at less than 14 times earnings, which is lower than the industry average of 16 for apparel retailers and its projected earnings growth rate of 16.5% for fiscal 2016. It also pays a decent forward annual yield of 3.2%, which is much higher than the S&P 500's average yield of 2.1%.

If you can pick one retail apparel stock, this is it

American Eagle Outfitters has all the characteristics of a solid retail apparel investment -- solid comps growth, a high-growth segment which can offset weaker results at its namesake brand, clever marketing and e-commerce initiatives, a bargain valuation, and good dividend. Investors looking for a decent investment in a weak industry should take a much closer look at American Eagle Outfitters.