Despite tough end market conditions in 2016, it's been a pretty good year so far the railroad stocks. Union Pacific Corporation (NYSE:UNP) and CSX Corp (NASDAQ:CSX) are both up on the year, and with the recent uptick in manufacturing indicators and the price of oil, there's reason to believe better days are coming for the railroads. That said, is now the time to buy Union Pacific? 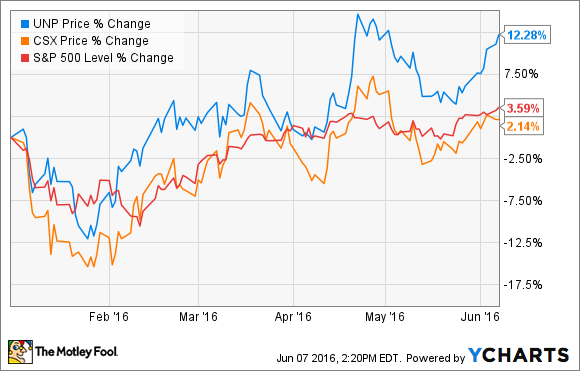 Listening in on Union Pacific CFO Rob Knight's presentation at a recent Wolfe Research Transportation conference, there appears to be four key reasons to buy the stock:

Let's look closer at these points. 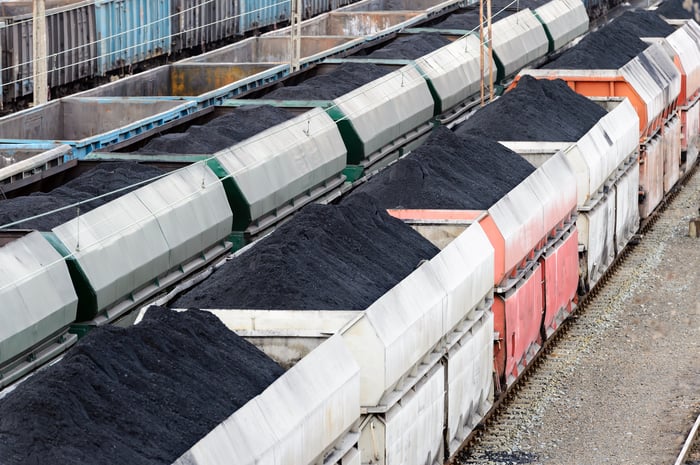 Two facts. First, there's no denying that coal is facing a structural decline; and second, it remains a key revenue generator for railroads. However, its importance is diminishing as coal carloads decline, and strength in other areas could offset coal declines in future years.

For example, CSX generated just 15% of first quarter revenue from coal, down from 21% in the same period last year. For Union Pacific, the respective figures are 11.5% and 17.4%. Whichever way you look at it, coal is less important to railroad earnings now.

While Knight didn't have many positive things to say about coal, he did outline positive signs for chemicals (carload growth was flat in the quarter) and grains (high global grain inventories are expected to lead to better conditions in the second half), while automotive remains strong (carloads up 7% in the first quarter). Adding the first quarter revenues of these three elements produces a figure equivalent to around 46% of total first quarter revenue -- much more important than coal's contribution of 11.5%.

Union Pacific highlights its operating ratio as a key marker of productivity. It's just a simple way of defining operating expenses divided by revenue -- a useful measure for cost intensive industries like railroads. Knight reiterated expectations to reach around 60% by 2019, and a longer term hope to hit 55%. As you can see below, it's an area where Union Pacific has performed well in the last decade. 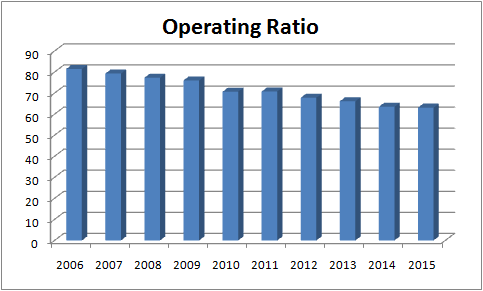 In a similar vein, CSX Corp management recently outlined expectations for "efficiency savings for the full year to exceed $250 million, approaching a company record." That's not enough to offset the negative impact of market forces for CSX, but it does indicate both companies could generate an increased level of profitability if the economy improves in the future. Moreover, both companies are still generating price increases even with falling revenues -- a sign of well run companies.

It's partly a consequence of a weak industrial economy, but if the latest data from the Institute for Supply Management Purchasing Managers Index is anything to go by, conditions are likely to improve going forward. Moreover, energy prices may have bottomed. All told, industrial conditions appear to be getting a bit better. 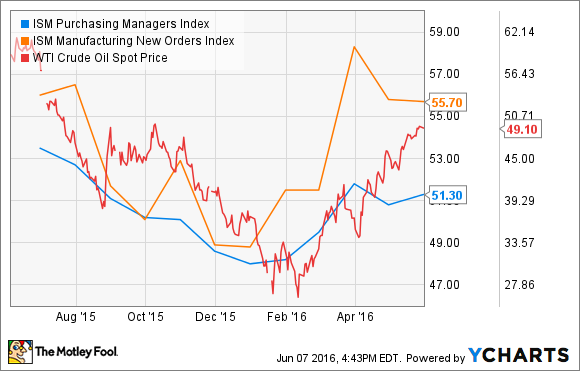 One reason to avoid

Putting all of this together, there is a case for buying railroad stocks -- but unfortunately, it's not strongly supported by valuations. As always with railroads, you have to look out for free cash flow; they are businesses that require a substantial amount of ongoing capital spending, not to mention high operating expenses, as discussed above.

A quick look at enterprise value (market cap plus net debt) to free cash flow suggests neither company is cheap (a figure of around 20 times is attractive). 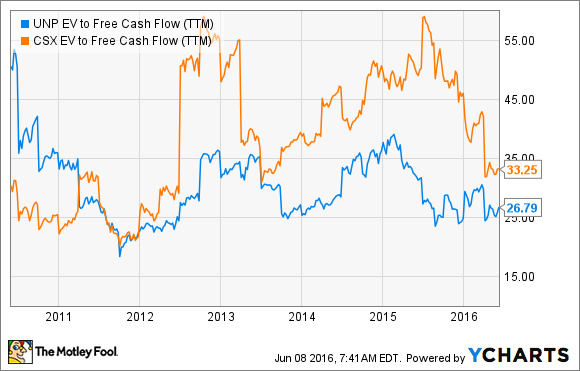 In short, conditions are starting to look better for the railroads, but they look fully priced, and it's hard to argue they are a good value on a risk/reward basis. There are ways to play a potential pickup in industrial conditions, but the railroads are not necessarily the best way to play it.