What: Apparel retailer Guess' (NYSE:GES) stock fell 14% in May, according to data provided by S&P Global Market Intelligence. 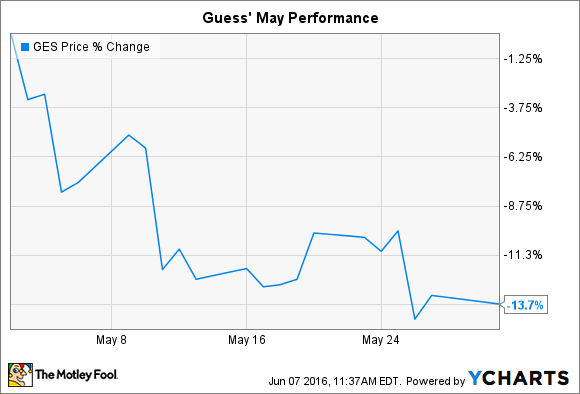 The slump pushed shares to a multi-year low as the company joined peers like Gap (NYSE:GPS) in dialing back its growth outlook on disappointing customer traffic levels.

So what: Guess' stock fell early in the month while investors braced for what was likely to be a downbeat first-quarter report. Yet the Q1 numbers released on May 25 were even worse than expected. Comparable-store sales fell 4% as gross profit margin sank to 32% of sales from 35% a year ago. As a result, Guess produced a net loss compared to a slight profit in the year-ago period. Rival Gap suffered a similar fate, with comps falling 5% gross margin slipping to 35% of sales from 38%.

Now what: Guess' management was expecting things to slow down in the first quarter, but the elevated pace of decline caught them by surprise. "The start to the year has been a bit more challenging than we anticipated," CEO Victor Herrero said in a press release.

As a result, executives dialed back their 2016 sales and profit forecasts. However, Herrero and his team left their longer-term projections in place, suggesting that they see the recent slowdown as just a temporary road bump.

That approach contrasts with many in the apparel industry who are scrambling to make major strategic adjustments. Gap, for example, is scaling back its geographic profile so that it can focus on the most profitable markets while cutting costs. "Now is the time to accelerate our transformation," its CEO, Art Peck, recently told investors.

Guess shareholders appear to be less optimistic about a quick rebound in light of headwinds facing the clothing industry. That's why the stock isn't likely to rebound until investors see actual evidence of the market-beating growth that management believes will start showing up in the latter half of 2016.