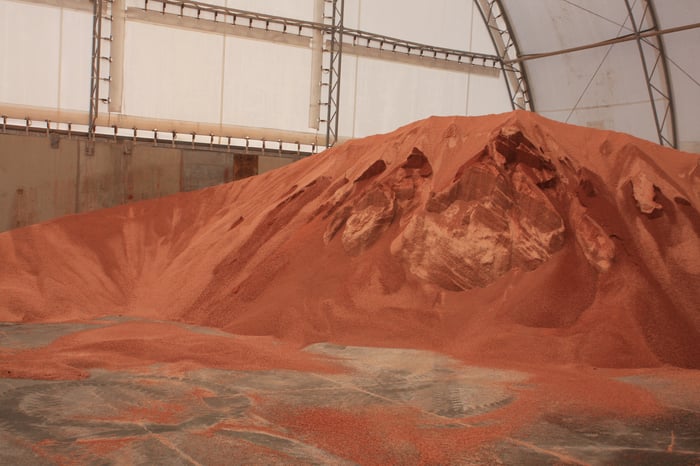 China potash inventories are running high and it has been receiving shipments from Russia, meaning it's in no hurry to sign pricing contracts with North America's big three producers. Image source: Getty Images.

Things aren't looking good for potash producers. It's already June and China still hasn't signed a contract for pricing of potash deliveries for the year, and the way things are going it just might not sign one at all. That means that potash prices, which were at $315 a tonne when it signed its last contract with North American marketing group Canpotex in March 2015, may have much further to fall.

PotashCorp (NYSE:POT), as one of the world's biggest producers of the crop nutrient, and one of the three members of Canpotex, has a lot riding on the outcome of the pricing negotiations. Its first quarter results reported back in April were hit hard by China's contract deferrals because it caused other markets to become more reticent about filling their own storehouses with more product. PotashCorp said segment revenues tumbled more than 50% to $322 million as sales volumes of 1.8 million tonnes fell well short of the 2.3 million tonnes sold in the year ago period.

It wasn't much better for the other two members of Canpotex either, Agrium (NYSE: AGU) or Mosaic (NYSE:MOS), as they also suffered sales volumes shortfalls.

The clubby potash market was thrown into turmoil in 2013 when Russian potash producer Uralkali ended its distribution agreement with Belaruskali, its joint venture partner in Belarusian Potash Corp., or BPC, a cartel that controlled roughly 43% of global potash exports.

The breakup caused potash prices to plummet from nearly $400 per tonne to $305. When pricing negotiations began for 2015, both BPC and Canpotex were looking for prices to rise about 10%, but Belaruskali quickly signed an agreement with China for potash at $315, which set the ceiling for the market.

According to Bloomberg, the potash market's weaknesses are exacerbated by expectations that India might curtail purchases while Brazil, another top market for the crop nutrient, is being hurt by a weak economy, with pricing there plunging to around $220 per tonne. So China doesn't need to rush into any contracts at the moment because its inventories are currently above average levels and its own potash producers are running at full capacity. Further, Russia has been delivering to it some 120,000 tonnes of potash per month.

So if prices are going to fall, there's good reason to believe they could go as low as $200 a tonne, maybe lower, as the Canpotex members were all reporting low realized prices. PotashCorp said in April its realized price was just $178 per tonne on a global basis, well below the $284 it had realized in the prior year's first quarter; Mosaic reported average selling prices of $207 per tonne; and Agrium said it got  $199 per tonne. 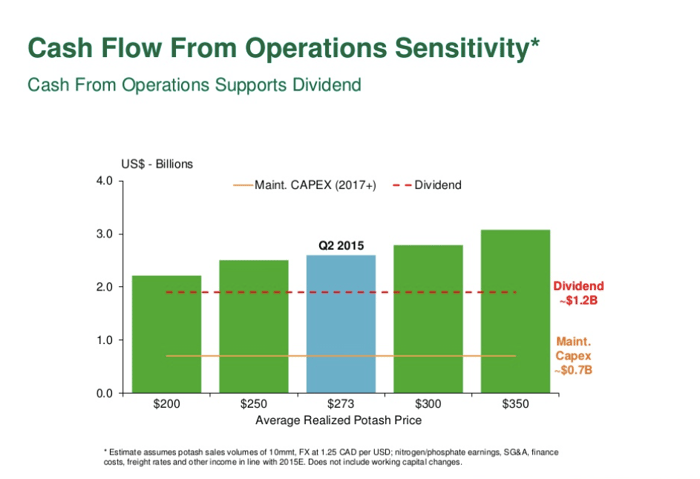 That low pricing environment also has implications for PotashCorp's dividend, which it pays out $1.2 billion annually. As the potash miner has itself noted, at $200 per tonne, the dividend is barely sustainable. It will likely strive to maintain it for sometime, but if pricing continues to cascade lower, there may be pressure to cut the dividend.

It's not all doom and gloom, though. Although Mosaic is forecasting pricing of between $180 and $200 per tonne for the second quarter, it is also anticipating the back half of the year to be more stable. And Agrium noted India announced changes to its crop nutrient subsidy program for the 2016-2017 planting year and said the new policy "improves the import economics and should support improved import demand in the second half of 2016." Moreover, Brazil's potash imports in the first quarter were up a surprising 20% from a year ago.

Agrium believes the market has reached the bottom of the cycle and is poised for new growth. Perhaps, but all signs seem to point to the fact that there's still a lot of ugly potash producers are going to need to endure, and with them trading between 15 and 18 times future earnings, there may be time yet to get them at a discount.