A company's earnings belong to its shareholders, and in my humble opinion, it's only right that I see some of those earnings in the form of dividends. That's why I prefer stocks that pay you to own them. And, despite the low interest rate environment, there are a still a few companies that pay you pretty well to stick around, like Buckeye Partners LP (NYSE:BPL), Southern Company (NYSE:SO), and FerrellGas Partners (NYSE:FGP).

Buckeye hails from the oil and gas midstream sector. Buckeye and peers took it on the chin, along with the oil and gas drillers, when oil prices started falling in mid-2014. While oil prices have recovered from their lows, they are still off their highs. Buckeye's units are still in recovery mode, too.

Here's the thing. Buckeye traces its history back over 130 years, though not all of it as a separately traded partnership. Still, it has survived bad markets before. And with a yield of nearly 6.6%, it's paying you well to stick out the current oil industry weakness. However, here's an equally important metric: Buckeye has upped its distribution every year for 21 years -- more than two decades of hikes. That provides a little comfort that your yield won't evaporate in a distribution cut. 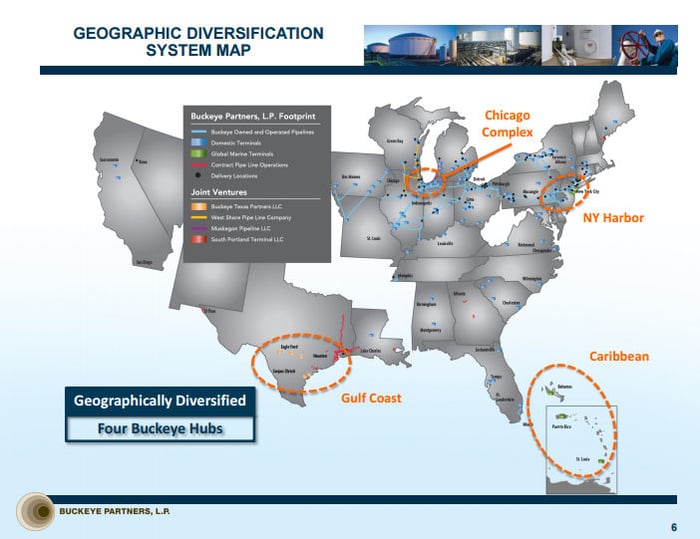 To give you a little more background on the business, Buckeye owns domestic and foreign midstream assets, most notably storage facilities. It has major business hubs in New York, the Gulf Coast of Texas, Chicago, and the Caribbean (where its foreign operations, about 40% of EBITDA, live). These are all key regions to be in and underpin a partnership that has a long history of paying unit holders well. This is one that's worth a deeper dive.

The other middleman in energy

FerrellGas Partners' yield is a far more impressive 11.5% or so. Part of the reason for this is that FerrellGas' top and bottom lines have been weak as of late. But there's a story here you need to understand before making a snap judgment. You see, like Buckeye, FerrellGas is just a middle man.

The partnership's main business is delivering propane to customers who use this byproduct from the oil and gas industry to heat their homes, dry their crops, power forklifts, and yes, fuel their grill. What's important here, however, is that FerrellGas simply passes on propane costs. So, even though the fuel's cost shows up on its top line, it has relatively little impact on the bottom line.

For example, the partnership's propane revenues fell roughly 45% through the first nine months of fiscal 2016. But it's cost for propane fell 46%. In fact, if you look at the dollar value of the propane revenue decline and the propane cost drop, the numbers were almost a wash. The bigger issue was that warm weather led Suburban to sell roughly 10% less propane in the nine-month span.

But the warm spell we've had could be a blessing in disguise. Essentially, FerrellGas is big enough to deal with a period of warm weather, but this industry consolidator might be able to use this tough patch to buy smaller competitors that aren't and, thus, expand its business. And you get an 11%+ yield just to hold tight and wait for a good cold snap to change investor perceptions.

It's worth noting, too, that FerrellGas is expanding its footprint into the oil and gas midstream space, which makes up nearly 30% of the top line today. Although this middle man business isn't exactly hitting on all cylinders, it gives the company another avenue for long-term growth and some business diversification. That said, propane is still the driving force for now.

Another company with a compelling yield today is Southern Company. Although the 4.6% yield is relatively small compared to Buckeye and Suburban, it's high for a utility. But with 16 years of annual increases backing it up, there's a reason to take a look at what's going on, here.

First off, the company recently embarked on a building program that includes a coal power plant fitted with carbon capture technology and nuclear power. Neither of these big-ticket projects has gone particularly well, though each appears to be progressing better than they had been (though hardly smoothly). Then there's Southern Company's recent announcement that it would buy natural gas-focused AGL Resources (NYSE: GAS). That deal will expand the company in a business that's expected to grow in the future, but utility deals can be complicated and take a long time to complete. Some also think the price tag is a little steep.

That said, Southern is one of the largest utilities in the country. It operates in mostly regulated regions, is expanding its business, and is investing in its infrastructure. And it has a long history of returning value to shareholders. So there's a reason for the higher yield, but Southern is a well-run company and you'll be paid well to wait for the issues to work themselves out.

There's always a trade off when you're looking at dividend payers. Often, the higher the yield, the more risk you have to take on. That said, there are times when Mr. Market looks like he's overreacting. Buckeye, Southern, and FerrellGas all appear to fall into the overreaction category today. Which means these are three companies that are paying you to own them while the troubles worrying the market get resolved. All three are worth a little more research if you're looking for a decent yield in the current low-yield world we live in.