A year ago, e-commerce seemed like one of Nordstrom's (NYSE:JWN) strengths. Nordstrom's full-price business generated $2.3 billion in online sales in 2015, up 15% year over year. Including the off-price segment, its e-commerce sales exceeded $2.8 billion. This made Nordstrom one of the top 10 online retailers in the U.S., albeit far behind market leader Amazon.com (NASDAQ:AMZN).

More recently, e-commerce has started to look like an Achilles' heel for Nordstrom, however. Growth has slowed dramatically and management has admitted that the company isn't making much money online. This puts Nordstrom in a tricky spot as it decides on its next moves in the e-commerce market.

Nordstrom has hit some big bumps in the past year. Image source: Nordstrom, Inc.

Nordstrom has long treated its commitment to technology and e-commerce as a point of pride. Online sales surged from 5% of Nordstrom's sales in 2005 to more than 20% of its sales last year. By 2020, the company hopes to get 30% of its revenue from e-commerce.

This year, Nordstrom executives have started to admit that the company's foray into e-commerce hasn't been an unmitigated success. Nordstrom's full-price online business is far less profitable than its in-store business. Meanwhile, its off-price online initiatives have been money losers so far. For Amazon, which has consistently reported 20%-30% annual growth in recent years, investors haven't been too concerned about profitability. Nordstrom doesn't have the same leeway. 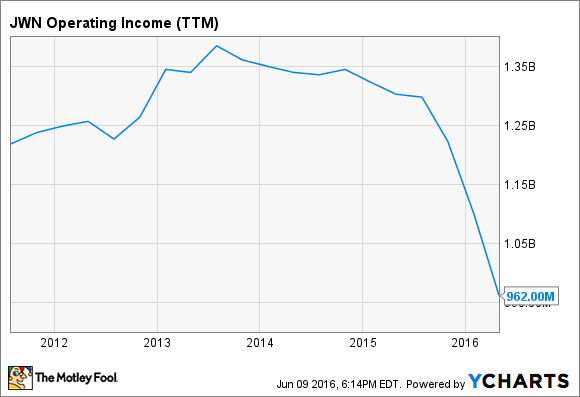 To improve its e-commerce profitability, Nordstrom is cutting less profitable merchandise from its online assortment. In its bid to drive sales growth, Nordstrom had added items to its e-commerce inventory that it simply couldn't sell profitably online. The company is also looking to cut down on fulfillment and shipping costs.

Of course, in the short term, this strategy shift has been painful. Nordstrom's full-price online sales grew just 3.1% last quarter, down from 19.8% growth a year earlier.

Nordstrom's pivot toward profitability rather than pure growth in its online business leaves it with some hard decisions about fulfillment capacity. Last August, Nordstrom opened its second full-price e-commerce fulfillment center. The new facility, located in Elizabethtown, Pennsylvania, allows Nordstrom to offer faster shipping to the East Coast.

At the beginning of 2016, Nordstrom seemed to be close to choosing the site for a third full-price fulfillment center -- thus following Amazon's lead by growing its fulfillment footprint. It had narrowed down the choices to two cities in California and one site outside the state.

With online sales growth crashing to a halt, Nordstrom is now hesitating to commit to building another full-price fulfillment center. In some ways, it's not surprising, given the uncertainty about Nordstrom's future e-commerce sales growth rate and the projected cost of $170 million.

On the other hand, this could be a case where it's necessary to invest some money upfront to save a lot of money later. California is Nordstrom's largest market. In fact, it's home to more than a quarter of all Nordstrom full-line stores.

I'm keeping an eye on this

There's no safe choice for Nordstrom. If it builds the third full-price fulfillment center, it risks being left with a glut of expensive fulfillment capacity unless its online sales growth accelerates again. But if Nordstrom abandons the plan, it could be faced with higher shipping costs and longer shipping times, eroding its competitiveness just as Amazon is becoming more aggressive in the fashion market.

The company's decision could shed a lot of light on management's confidence about Nordstrom's long-term e-commerce growth prospects.