Down 9% over the past year, oil refiner and oil sands digger Cenovus Energy (NYSE:CVE) has seen its stock rocket 51% over just the past four months.

It's been a startling rebound for the Canadian oil producer, and according to one investment banker, it may be only the beginning of the good news. This morning, analysts at Morgan Stanley announced they are upgrading shares of Cenovus from equal weight to overweight, based on its "higher conviction" that higher oil prices are here to stay.

Here are three things you need to know about the Cenovus Energy stock's upgrade.

Sunset for the oil industry -- or a new dawn? Image source: Getty Images.

Thing No. 1: Oil prices are high, and could go higher

Probably the most important factor driving Morgan Stanley's upgrade of Cenovus Energy stock is the rising price of oil. WTI crude prices currently hover just below $50 per barrel, and according to Morgan Stanley, are likely to rise as high as $77 a barrel over the "long term."

That estimate is up from $57 a barrel in the analyst's previous forecast -- a jump nearly as big as Cenovus Energy stock's price jump over the past four months. And according to a write-up on TheFly.com this morning, Morgan Stanley is calling its new forecast for a big increase in oil prices "a bigger and higher conviction event" than it previously thought. Seeing as Morgan Stanley's new estimate calls for more than a 50% additional jump in the price of oil going forward, you can see how this would make the analyst optimistic about Cenovus Energy's stock.

So why does Morgan Stanley think Cenovus Energy will be a prime beneficiary of higher oil prices? According to the analyst, Cenovus' "cash rich balance sheet" will enable the stock to "participate" in higher oil prices and to "re-accelerate growth quicker than peers."

Mind you, Cenovus is not entirely without debt. But its $4.8 billion debt load is largely offset by more than $3 billion in cash -- nearly as much cash as Occidental Petroleum, now downgraded, has available to deploy across a market capitalization nearly 5 times as big as Cenovus' (and incidentally, more than six times as much cash as similarly sized Concho has to deploy -- though Concho, too, got upgraded this morning).

Thing No. 3: And yet, things could still go wrong

Morgan Stanley doesn't talk a lot about valuation in its upgrade of Cenovus, but as investors, that's a key data point we need to consider -- all the happy talk about higher oil prices notwithstanding.

Viewed from a plain vanilla P/E perspective, Cenovus Energy stock's share price of 13.4 times trailing earnings doesn't seem expensive at first glance. But here are two reasons it may be expensive regardless. First off, while Morgan Stanley is optimistic about the prospects for oil prices -- and oil profits -- not all analysts agree. In fact, the consensus view on Cenovus as told by analysts polled on S&P Global Market Intelligence is that the stock is unlikely to grow earnings much faster than 3% annually over the next five years. Even for a 13 P/E, that's pretty slow growth.

It's also worth pointing out that Cenovus' P/E seems to overstate the company's true cash profitability. While trailing net income, as calculated under GAAP, shows Cenovus earning $901 million in "profits" over the past year, actual free cash flow at the company was negative $98 million. This suggests that Cenovus' profits may not be all they're fracked up to be.

"But wait!" you say. Isn't that only because oil prices have been so gosh-darn cheap lately? Can't Cenovus become more profitable, and its stock accordingly cheaper, if oil prices are about to return to historic highs?

That's a good question, but the answer is "no." Take a look at this chart, which shows us how oil prices averaged higher than $77 per share -- usually much higher -- in 2014: 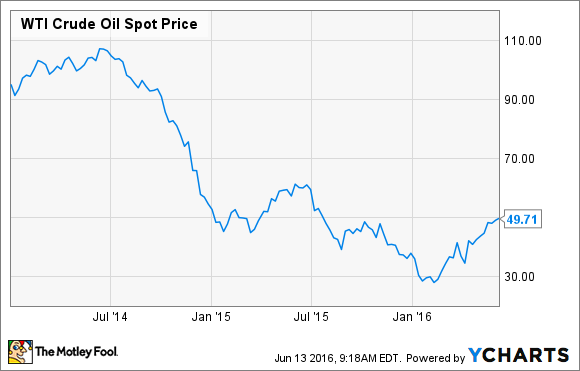 Despite that more favorable pricing environment, Cenovus only earned about $640 million in profits in 2014, and produced free cash flow of about $400 million. Were oil prices to return to 2014 levels, as Morgan Stanley is be predicting, that would imply that in such an environment, Cenovus might only earn enough profit for today's share price to translate into a P/E of 19, and a price-to-free-cash-flow ratio of 30.

Indeed, even the much higher oil prices of 2011 to 2013 never produced more than $1.5 billion in profits, or $473 million in free cash flow for Cenovus. And that implies that even in the rosy scenario that Morgan Stanley is painting for us, the chances of Cenovus reaping windfall profits from long-term higher oil prices seem iffy at best.

So long story short, what's my advice? If you own Cenovus Energy stock today, you're sitting atop a 50% profit for the past four months -- and that's not nothing. Morgan Stanley may be promising more profit is in store, but I'd suggest the smart thing to do is be happy with what you've got already, and take some chips off the table.