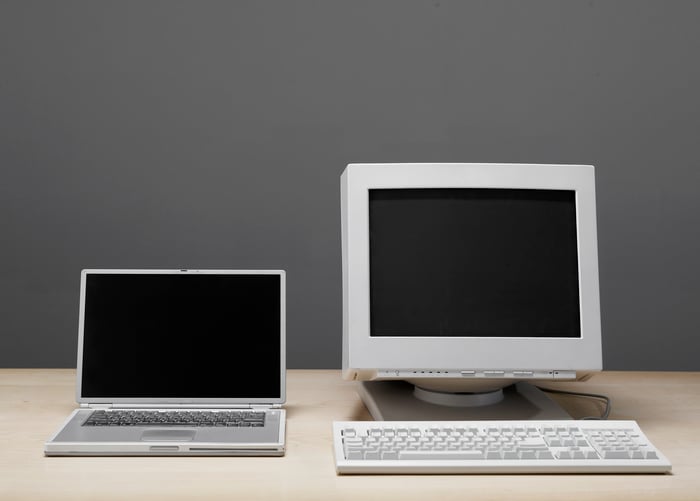 There are two trends I'm pretty excited about that probably don't get enough attention.

1. People who grew up with technology are entering management and politics.

My wife had a boss who printed every email he received "for his records." I'm not making that up. It wasn't a compliance thing. But older generations who grew up learning one way of doing things have a hard time accepting change, or even realizing what the change is.

Every generation does this. In the same way children learn second languages far better than adults, those who didn't grow up with technology have a hard time understanding its power. A ten year old who has been using computers for five years may be far more tech savvy than a 60 year old who has been using them for 20. Investor Dean Williams once said, "Expertise is great, but it has a bad side effect. It tends to create an inability to accept new ideas."

It's easy to underestimate how important it is that people who grew up with technology are now entering management and politics. They've never known a world without the Internet and barely remember life without smartphones, and they see the world in a completely different lens than my wife's old boss.

Younger generations don't view technology as a new enhancement of how we do things; they view it as a fundamental piece of how work is always done, from A to Z. They're far more insistent on efficiency and convenience in everything they touch, more open to changing to new systems, and speak a language that generations who came of age before the late 1990s never could.

Max Plank once said new scientific truth "does not triumph by convincing its opponents and making them see the light, but rather because its opponents eventually die, and a new generation grows up that is familiar with it." No one actively opposes technology, but a similar principle applies.

The typical path of how people respond to life-changing inventions is something like this:

The benefits of innovation don't come when we invent something new. It comes when the people with power and influence embrace it without reservation. And in a very real sense, we're just getting there now with technology.

2. Energy will be so cheap that we barely think about it.

It's hard to exaggerate how important energy has been to the global economy. World wars have been started over a lack of energy, and won because of superior energy. It's been the cause of countless recessions, uprisings, booms, busts, and balances of political power over the last 150 years. Short of religion and state, it's hard to think of something as influential as energy. Daniel Yergin wrote in his book The Prize: "The history of oil illuminates how ours has become a 'Hydrocarbon Society' and we, in the language of anthropologists, 'Hydrocarbon Man.'

I suspect we'll be Hydrocarbon Man for decades more. But we're also underestimating how far energy costs have fallen and how much potential they have to keep falling. 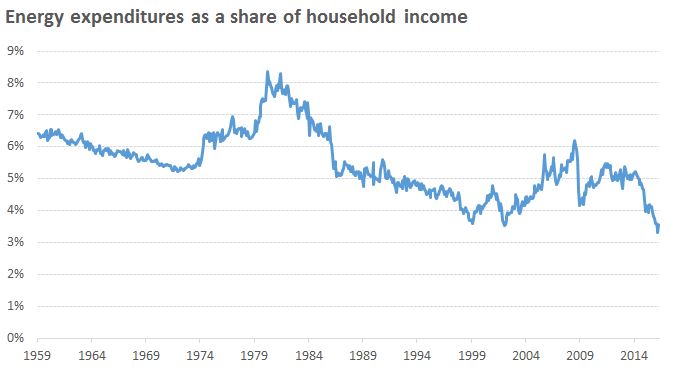 A lot of this is from the energy bust that cut the price of oil in half. But that bust isn't just market volatility. It's the result of one of the biggest bursts of energy innovation in history, more than a decade in the making. The history of predicting oil prices makes astrologers look smart. But energy innovation from fracking means we have far more recoverable oil today than we thought only a few years ago. Forecasts of what we're capable of have changed not because of market optimism, but because things truly are different now.

Add to it how much of the decline in energy consumption is from things that probably won't go away:

Efficiency. Average MPG on US cars has gone from 13.1 in 1975 to 24 in 2013. In financial terms, this is indistinguishable from cutting the price of energy almost in half.

Commuting. Average miles driven per capita declined about 10% from 2005 to 2014. Part of that was from the recession, but part was a migration away from suburbs into cities, where people drive less. Suburbs grew faster than cities every decade from 1920 to 2010, according to the Census Bureau. That ground to a halt, as more than half of large cities are now growing faster than the nation's suburbs. From 2012 to 2013, 289 out of the country's 381 metropolitan regions grew their population. Higher population in dense cities means less driving. Sometimes it means no driving. According to the Centers for Disease Control, the percentage of high school seniors with a driver's license declined from 85% in 1996 to 73% in 2010.

Combine this with the falling cost of solar, and supercharge that with battery-powered cars charged by solar, and a whole new paradigm may emerge in the next 10 or 20 years, where energy goes from one of the economy's top expenses to something far less meaningful. It could be like what happened with airline prices from the 1970s through today, only in a much more influential way.

Consider what Bloomberg recently pointed out:

Already, in many regions, the lifetime cost of wind and solar is less than the cost of building new fossil fuel plants, and that trend will continue. But by 2027, something remarkable happens. At that point, building new wind farms and solar fields will often be cheaper than running the existing coal and gas generators. "This is a tipping point that results in rapid and widespread renewables development," according to BNEF.

There will always be energy booms and busts. But I think we're probably discounting the possibility that the high energy prices of the 2000s inspired so much innovation and change that we're now looking at the prospect of years, maybe decades, of energy prices that could fall so low you barely think about them.