There are some legitimate reasons to love dividend stocks, including their streams of income and the possibility of principal appreciation. But finding the great dividend stocks to invest in isn't always easy. After all, a high dividend yield doesn't automatically equate to a good dividend investment. To help identify potentially solid dividend stocks, here are two that have been beaten up during the past 12 months that may represent good buying opportunities: Apple (NASDAQ:AAPL) and Wells Fargo (NYSE:WFC). 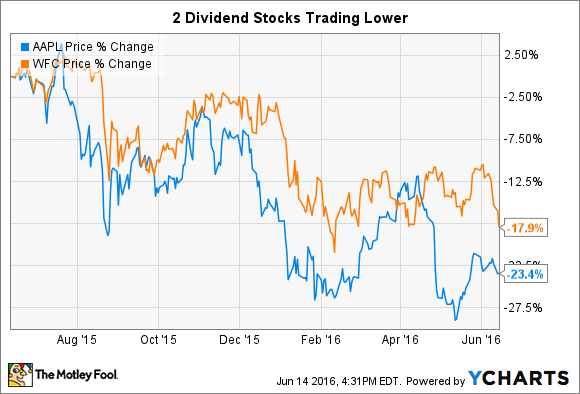 Apple stock has the lowest dividend yield at 2.3%. But investors shouldn't overlook its potential to provide meaningful income over the long haul. The company is a cash cow, consistently maintaining an impressive 40% gross profit margin for years. Apple raked in $50.7 billion in net income in the trailing-12-month period, representing a whopping 22% of net income during this period.

Apple's consistent history of high profit margins gives the company far more cash than it can put to work. Apple pays out just 23% of earnings. This leaves investors with a hefty stream of earnings to support both current dividend payout levels and future dividend payout growth.

Perhaps best of all, Apple stock's valuation looks enticing after a 24% decline in the trailing-12-month period. Apple trades with a price-to-earnings ratio of just 11 -- a surprising level given that the tech giant's earnings per share are up 11% in the trailing-12-month period. Sure, Apple doesn't expect earnings growth for the current quarter. But this is simply the aftermath of tough comparisons following a year of huge growth. Longer-term, Apple's customer loyalty and focused product strategies still look poised to continue driving growth.

Wells Fargo's dividend yield of 3.1% is meaningful enough to turn the heads of most dividend investors -- especially when this yield is considered in conjunction with the bank's conservative balance sheet and its massive scale, which is arguably its greatest competitive advantage.

But the bank doesn't stand out among its peers as a comparative bargain the way Apple does. Comparing the current market price to its current book value reveals Wells Fargo has a price-to-book ratio of 1.4, compared with an industry average price-to-book ratio of 0.9. However, investors pay a higher price when they want to own a piece of one of the highest-quality banks in the world. Wells Fargo's return on assets beats most of its competition's, even as the bank operates with a conservative balance sheet.

There's little merit to the stock's recent sell-off. It's propelled mostly by near-term concerns about a challenging economic environment for banks, including low interest rates, increasing loan losses, and a heightened regulatory environment. While these problems could persist longer than anticipated, they may just as likely end earlier than expected.

While it might not appear like the greatest bargain among its peers at first sight, a deeper look indicates it may be a good time to buy into this iconic bank. Sometimes with great businesses like Wells Fargo, a slight discount is all investors need to make it worthwhile to buy shares.