Over the past five-plus years, Novavax's (NASDAQ:NVAX) shares have been on an absolutely wild ride as the company has inched ever closer to transforming into a commercial operation. 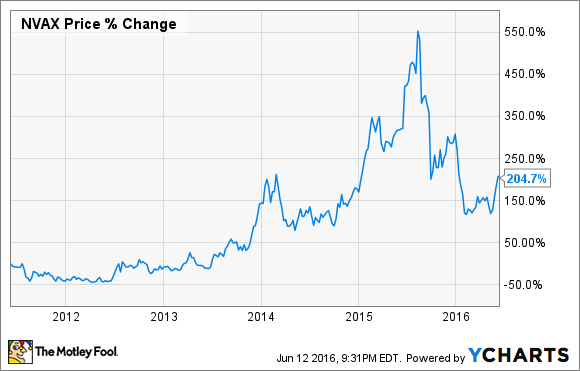 Despite the stock's 200%-plus gain since 2011, though, the Street still thinks that Novavax's best is yet to come. In fact, the average analyst estimate implies that the biotech's shares could appreciate by yet another 118% over the next 12 months. With this monstrous price target in mind, let's dig deeper to find out if Novavax's stock really is a screaming buy.

Although respiratory syncytial virus, or RSV, is the most common cause of lower respiratory tract infections in infants and young children, and a major contributor to hospitalizations among the elderly, AstraZeneca's (NASDAQ:AZN) Synagis (palivizumab) is currently the only approved prescription medication indicated for the prevention of serious lung disease caused by RSV infection.

Topping it off, Synagis is indicated for use only in children at high risk for severe lung disease from RSV, and it must be administered every 28 to 30 days to maintain its effectiveness. And as a single dose of Synagis can reportedly range from $651 to $2,448 depending on an infant's weight, many parents are simply unable to pay for multiple injections.

That's where Novavax comes into the story. Novavax is presently developing a promising F-protein nanoparticle RSV vaccine candidate (RSV F vaccine) indicated for older adults, infants via maternal immunization, and children. Right now, the biotech has initiated two pivotal-stage trials -- one in the elderly and another in pregnant women -- in hopes of bringing its experimental RSV F vaccine to market: 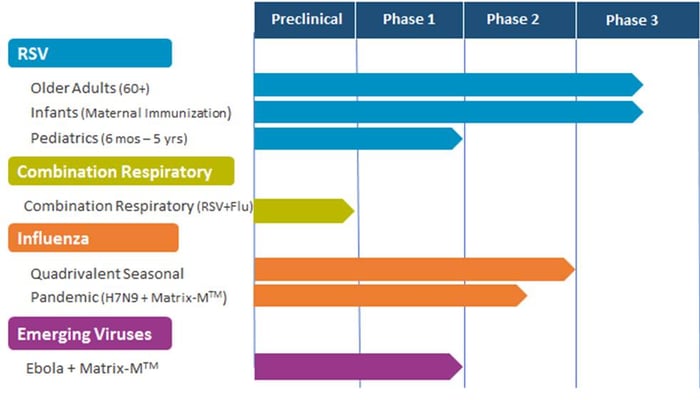 In practice, this experimental RSV F vaccine would likely be given once and co-administered with a yearly flu shot for older adults over the age of 60. That makes it fairly easy to keep up with compliance-wise, and a single injection shouldn't be a financial roadblock for most individuals.

For pregnant women, the vaccine would be administered in the third trimester to confer immunity to newborns, potentially becoming a critical part of the standard of care for pregnant women moving forward.

Cutting to the bottom line, analysts think that these first two indications could easily generate sales in excess of $2 billion by 2024. While there are some concerns that Astra's experimental RSV medicines, MEDI7510 and MEDI8897, could eventually cut into Novavax's RSV market share, the fact remains that these product candidates are only in mid-stage trials at the moment, meaning that the earliest either would reach the market would be perhaps sometime in 2020.

Novavax, by contrast, is on track to report top-line data from its late-stage trial in older adults in the third quarter of this year. So, with a Fast Track designation from the FDA now in hand, this experimental RSV F vaccine could be commercially available by mid-2017 -- that is, if it hits the mark in terms of safety and efficacy in its ongoing pivotal trial. As first-mover status for older adults would likely translate into over a billion in sales within a few short years, the Street's lofty 12-month price target looks achievable.

Having said that, there's always the risk that this experimental RSV F vaccine runs into trouble from a safety standpoint, or simply fails to meet its primary efficacy endpoint in older adults. In that case, investors will have to look toward the biotech's other ongoing pivotal trial in pregnant women that's expected to wrap up in 2020, or perhaps its other clinical assets in influenza and Ebola, to create value moving forward.

All told, Novavax does seem like it has a real shot to double over the next year, giving it a compelling risk-to-reward ratio right now. Even so, it's still probably a bad idea to go hog-wild with this, or any other, speculative biotech. Clinical-stage biotech stocks, after all, can blow up in a heartbeat on negative trial results or regulatory setbacks. So, while it might be a good idea to open a small position in Novavax ahead of its upcoming clinical catalyst, you shouldn't buy more than you can afford to lose.