Another milestone in the collapsing yield phenomenon

This may sound a bit like inside baseball, but stick with me -- there is a payoff for stock investors. At the beginning of last week, the average rate on German government bonds, which the Bundesbank (Germany's central bank) publishes daily, turned negative for the first time in recorded history, before continuing to fall further into negative territory.

Today, it was the turn of the benchmark 10-year German government bond, which joins approximately $10 trillion worth of bonds worldwide that are now trading at negative yields. The following graph makes clear that the phenomenon of collapsing bond yields has afflicted developed markets worldwide during the post-crisis era, even if it is particularly pronounced in Germany (red line, with the U.S. 10-year Treasury yield in blue): 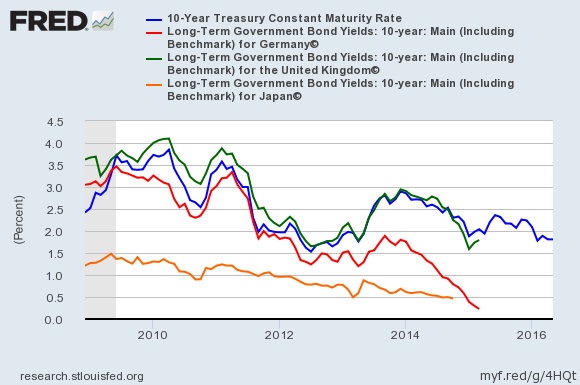 Are you wondering why interest rates are plumbing historical depths this week? Just ask investors. That's what Bank of America Merrill Lynch (BAML) does, conducting a monthly "Global Fund Manager Survey." The investment bank just published the survey results for the month of June, after polling 213 fund managers with $654 billion in assets under management (a respectable figure). BAML's survey concluded that "[g]lobally, sentiment remains weak. Global asset allocators are holding the highest average cash balance since November 2001, while equity allocations have dropped to four-year lows."

Here's where we get to the mystery of the vanishing yields: The investors who have been pulling money out of equities haven't just been letting it sit in cash: Their allocation to bonds rose to a net 34% underweight from 41% underweight the previous month. Although a net underweight doesn't exactly sound like a love affair with bonds, it turns out to be its highest figure in three and a half years.

Money flowing out of equities and into cash and bonds is a mechanical explanation for falling bond yields (higher demand for bonds pushes bond prices up and bond yields down), but what's motivating those flows?

The greatest fear for investors

Part of it is the fear of "Brexit" (a portmanteau of "Britain" and "exit") -- the risk that the United Kingdom will vote in a referendum next week to secede from the European Union (EU). Of BAML's survey respondents, 30% identified Brexit as the biggest "tail risk" for world markets.

By definition, a tail risk is a risk that has a vanishingly low probability of occurring (think of the bell curve as your probability distribution -- tail risks belong in the right or left tails of the curve). Today, The Economist's Brexit poll-tracker, which aggregates the main polls, shows 44% in favor of leaving the European Union, against 42% in favor of remaining, with 10% saying they don't know. With those kind of numbers, if Brexit is a tail risk, it must surely be the best-anticipated, most likely tail risk in human history.

I don't disagree that a "leave" result in next Thursday's referendum would come as something of a surprise for financial markets -- and would almost certainly be the source of stock price volatility that could be significant (as well as volatility in other asset markets).

Nevertheless, for investors who are normally diversified (particularly U.S. investors), the long-term impact ought to be negligible. Yes, there is some uncertainty linked to the practical implications of the U.K. leaving the EU. Yes, there could be significant repercussions on specific U.K. or European companies, but as far as U.S. companies (and even most European companies) are concerned, the impact on long-term business values will amount to a rounding error. On the other hand, near-term price volatility could create buying opportunities for patient, opportunistic capital.

If you're going to spend any time at all thinking about Brexit, you should be preparing to capture just such opportunities, should they materialize.