Stocks declined for the second straight session as the Federal Reserve began its two-day monetary policy meeting. The results of that meeting, including any change to long-term interest rates, will be published on Wednesday at 2 p.m. ET. 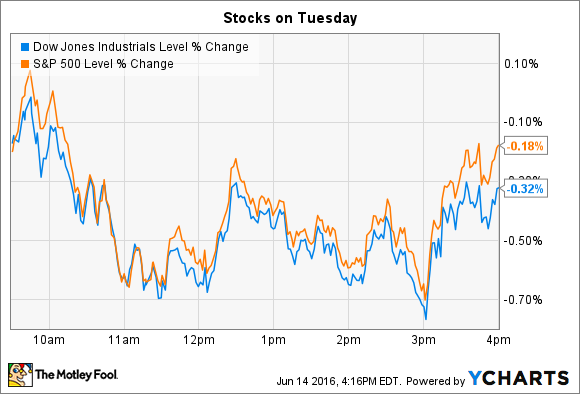 In economic news, retail sales ticked up by 0.5% in May, the government said, which beat economists' forecast of 0.3% growth. A few standout performers were furniture stores, sporting-goods stores, and building-supply shops. On the other hand, electronics and clothing retailers posted below-average growth, as a group.

American Express was the Dow's worst daily performer, falling 4% to push the stock to a 24% decline over the last year. The drop came as peer Synchrony warned investors that it is seeing an uptick in its charge-off rate, or the percentage of loans that end up in default.

Synchrony noted that charge offs remain at historically low levels, but the fact that they're rising will still hurt earnings over the short term. "Starting in the second quarter of 2016," executives said, "we expect higher reserve builds, with our allowance coverage ratio likely to increase 20 to 30 basis points from the first quarter of 2016."

A worsening of consumer credit quality would likely pinch American Express' business directly. As the company warns in its 10-K report, "higher write-off rates and an increase in our reserve for loan losses adversely affect our profitability." However, its market-beating charge-off rate suggests it won't be as affected as other industry players. That's the good news for shareholders, even as they digest the increasing likelihood for slower earnings growth as a result of declining credit quality .

Vonage gets an upgrade

Cloud-based communications services specialist Vonage Holdings spiked 13% after receiving a head-turning stock upgrade. An analyst at Citigroup boosted shares to a "buy" rating while pushing his price target to $8 per share, which would mark a 60% return from yesterday's closing price.

The new optimism is based on Vonage's leading position in what's called "communication platform as a service," or CPaaS. This cloud-based solution allows companies, for example, to initiate phone calls directly from an app or website. The resulting improvement in speed and overall customer service might convince nearly all enterprises to eventually migrate onto the new platform, leading to "significant growth opportunities," the analyst predicted.

Vonage has projected the CPaaS market, which was below $1 billion of revenue last year, to surge to $8 billion by 2018. The company's major challenge in the meantime will be to use its solid position in the industry to fend off competitors while innovating to keep its communications platform at the cutting edge. That's a tall order for such a small company, but the payoff could be big if Vonage can convince enough enterprises of the benefits of shifting to its cloud-based communications service.