Kroger (NYSE:KR) stock has trailed the market by double digits so far in 2016. In March, the supermarket chain posted its 10th straight year of market share gains against rivals like Wal-Mart (NYSE:WMT) and Whole Foods (NASDAQ:WFM), but investors focused instead on a sales growth slowdown as a reason to turn more bearish on the business.

With that bigger picture in mind, here are three trends to watch when Kroger posts its fiscal first quarter report on Thursday, June 16, that could determine whether the stock rebounds or continues to lag behind the broad market.

Kroger's comparable-store sales growth dipped below 4% for the first time in over a year last quarter. However, that decline was due to slowing food cost inflation rather than lower customer traffic. Strip out the impact from falling prices, and comps would have risen by 6% -- on par with the prior year's stellar growth pace. As price swings are likely to keep pressuring results, investors shouldn't expect comps as high as last year's 5.5% boost. Instead, Kroger is likely to grow by around 3% in 2016. That result should still be enough to allow the retailer to handily outpace Wal-Mart, which recently posted 1% first quarter comps, and Whole Foods, whose latest comps declined by 3%.

The main driver behind Kroger's awesome 49-quarter growth streak has been its success at appealing to shoppers on both extremes of the value spectrum. Its corporate brands, which have spiked to almost one-third of sales volume, allow it to poach share from the lower end of the market through aggressive pricing and improved selection.

At the same time, Kroger's premium offerings around craft beer and brands like Simple Truth attract higher income shoppers and ultimately contribute to the pressure that's behind Whole Foods' new lower-priced store concept. Executives believe they can keep this solid momentum going even if the broader market doesn't grow quickly. "Because Kroger is doing a better job of offering high quality food at affordable prices," CEO Rodney McMullen told investors recently, "we continue to win with our customers even as they remain cautious about their overall spending."

Consensus estimates peg earnings at $0.69 per share this quarter, marking a 10% boost over the prior year period. Looking further out, Kroger's management targets generating about $2.25 per share in fiscal 2016.

That result would be on the low end of their long-term profit growth goal of between 8% and 11% per year, but investors should keep two things in mind, here. First, Kroger routinely outperformed its earnings guidance last year, and it could do so again in 2016, especially if comps growth stays healthy. Second, the supermarket chain is taking a short-term hit from the nearly $1 billion merger with Roundy's it just completed. 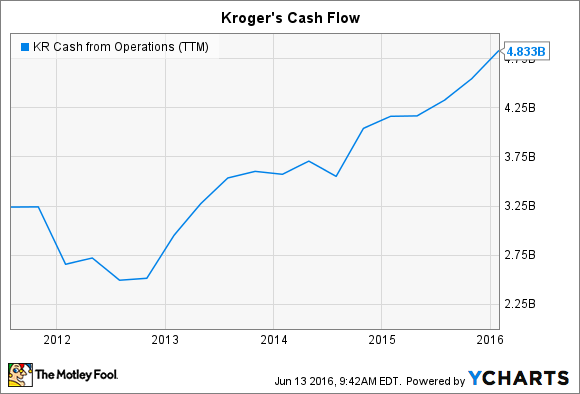 In that light, cash flow is a better metric than earnings per share for investors to watch this year. Cash from operations has surged since 2013 to a $5 billion annual pace. As long as that growth continues, Kroger should have no trouble raising funds to plow back into the business while delivering steadily increasing profits to shareholders.