What: ImmunoGen (NASDAQ:IMGN) is down 18% at 1:00 p.m. EDT after the biotech announced last night that it plans to raise $100 million by selling convertible senior notes due in 2021.

So what: The biotech had $182.9 million in the bank at the end of March, having burned through $91.6 million during the previous nine months. At that rate, ImmunoGen has about a year and a half of cash, but since it's about to start a larger clinical trial, the burn rate will likely increase substantially.

Unfortunately, ImmunoGen picked a poor time to raise capital since its market cap is the lowest it's been since 2010. We don't know the conversion rate for the convertible notes yet, but presumably ImmunoGen could have gotten a higher conversion rate if it had raised capital late last year. 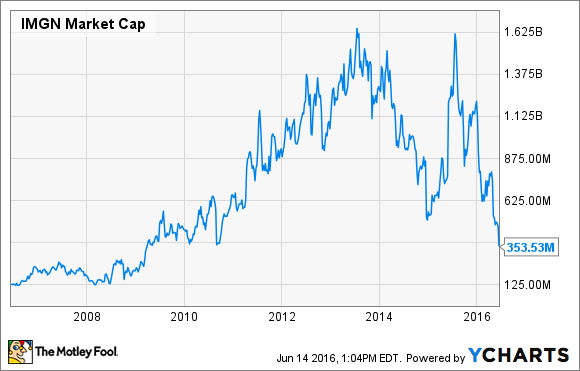 Management didn't follow the old biotech adage, "Raise when you can, not when you have to," and investors are punishing ImmunoGen for it. Assuming the notes are converted to shares, the lower conversion rate will result in more dilution than a higher rate would have -- or the company could have raised more money with the same dilution. ImmunoGen could be profitable in 2021 and able to pay off the notes, but there are no guarantees -- and the notes are convertible at any time by the holder, so it might not even get to that point.

In addition to the anticipated dilution, investors could also be selling ImmunoGen because we don't know the deal terms. Strong companies with investors clamoring for shares can often announce that they're raising capital after the close of the bell and have deal terms before the market opens the next day. That clearly didn't happen, suggesting ImmunoGen's bankers might have to sweeten the deal with a lower conversion price or by throwing in warrants to buy additional shares -- further diluting shareholders. ImmunoGen did note that it expects the sale to close on June 20, so we should know the deal terms by then.

Now what: We need to know the deal terms to understand how much the new notes are going to hurt Immunogen's valuation. Assuming there's dilution, investors will own a smaller piece of the pie, but the hope is that the pie will be much larger if the FORWARD I trial is successful. ImmunoGen plans to meet with the Food and Drug Administration over the summer to review the new trial design, so, hopefully, it can begin enrollment shortly thereafter.