It's been a brutal month thus far for bank stocks -- for Bank of America (NYSE:BAC) in particular, which has seen its shares fall by 10% as of yesterday's closing bell. The good news, at least for the time being, is that things have taken a positive turn today. Roughly halfway through the trading day on Wednesday, shares of the nation's second-biggest bank by assets are up more than 2%.

There seem to be three reasons that Bank of America's shares headed higher today. In the first case, it's reasonable to assume that the bank's shares had dropped so far by yesterday that investors saw it as an opportunity to buy.

It's for this reason that analysts almost across the board believe that Bank of America's shares are a buy. "I think [the banks] are buys," said Paul Miller of FBR & Co. in a recent CNBC interview. "I would love to buy Bank of America at these levels." 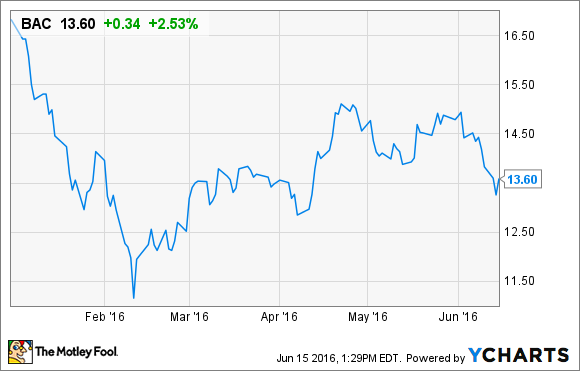 Investors tend to agree. You can get a sense for this by looking at Bank of America's short interest, which measures the percentage of its outstanding shares that are sold short. As I discussed here, only 0.73% of Bank of America's outstanding shares are currently being shorted. That compares to an average short interest of 3.7% across all of the banks tracked by the KBW Bank Index.

Beyond merely its valuation, The Financial Times reported that Bank of America is on the verge of cutting as many as 8,000 more jobs. This isn't anything to celebrate, given what it means for the people who may lose their jobs, but it serves a sign that the $2.2 trillion bank believes that it can drive profits by squeezing out more costs.

Finally, it shouldn't go without noting that the market overall was up today. Both the S&P 500 and the Dow Jones Industrial Average were higher through the morning and early afternoon, though both indexes are currently paring their gains.

A rising tide lifts all boats, as the old saying goes. This is particularly true when it comes to Bank of America. Its beta, which measures a stock's performance on a daily basis relative to the broader market, is 1.2. This means that it tends to move 20% more than the market on a typical day.

Taken together, then, investors in Bank of America got a respite today from the recent downward trend in its share price. That's good news for the time being, but with everything going on in the market today -- from global economic fears to the possibility that interest rates will stay lower for longer to the upcoming vote in the United Kingdom over whether to separate from the European Union -- bank investors should steel themselves for a volatile ride over the weeks ahead.