The shooting of more than 100 people in Orlando last weekend that killed 49 caused the stocks of Smith & Wesson Holding (NASDAQ:SWBI) and Sturm, Ruger (NYSE:RGR) to experience a spike in early Monday morning trading, with shares up roughly 7% and 9%, respectively, for the day. When tragedies like this occur, it reminds people of the need to protect themselves and their families, and the most powerful defense is often a handgun. Thus gun stocks can benefit when people feel unsafe and an impending spike in gun sales seems likely.

Even before the tragedy in Orlando, both publicly traded gunmakers had benefited from a heightened concern for personal safety, and Smith & Wesson's Shield line of firearms, designed with the concealed-carry market, has quickly proven popular. Well over 1 million Shield guns have been sold since their introduction in 2012, and Smith & Wesson just released its latest version in .45 caliber, increasing the firepower available over the 9 mm and .40-caliber versions it was producing.

Other manufacturers have also seen increased sales, with Glock, Sig Sauer, and others catering to the self-defense market.

Although President Barack Obama is often credited with driving gun sales higher, with his hints and feints toward stricter gun-control legislation, it's really been a desire for personal defense that has motivated buyers to send gun sales soaring. The top-selling handguns in 2015 were by and large geared toward this market, and many expect they'll dominate gun sales again this year. 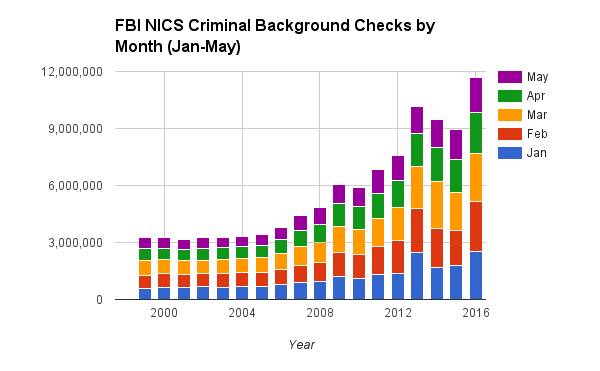 Yet recent media reports made it sound as if the industry was entering a lull. After the FBI released its criminal background-check numbers for May, many outlets reported the torrid pace of gun sales was cooling off, and shares of both Smith & Wesson and Sturm, Ruger declined sharply.

The law enforcement agency said its National Instant Criminal Background Check System (NICS) database showed a 13% decline from month to month, the third consecutive time the number of background checks fell month to month. Analysts began changing their outlook for the company, with the thought that Smith & Wesson in particular would have a tough time replicating its past beat-and-raise success.

Yet for anyone who cared to actually look at the numbers, it was clear the FBI had just completed its 13th straight month notching a year-over-year increase in number of background checks. May 2016 had the largest number of background checks for any May, with each month over the past year being able to claim title as the highest ever for that month. The industry isn't slowing, it's still picking up steam.

Last year, the FBI conducted more than 23.1 million background checks on people wanting to buy a gun, a huge record that many thought would be tough to break, but so far through May, the FBI is running 30% ahead of 2015. Last year at this point it had conducted 8.9 million investigations; this year, it's performed 11.7 million.

Investors shouldn't have needed another tragedy to alert them to Smith & Wesson's potential, or Sturm, Ruger's. It was only necessary to look at how the public has viewed the past few years of social unrest, and terrorist incidents here and abroad, to understand why they remain very concerned for their safety.

In its fiscal 2016 third-quarter conference call with analysts in March, Smith & Wesson noted that adjusted NICS records showed background checks for handgun purchases had increased 45%, but the number of handguns it was shipping into the consumer channel surged 68%, exceeding even its own expectations. Even Ruger reported sales were 24% higher, and it noted inventories fell in the period as demand improved; what it saw was typical seasonal-demand patterns. 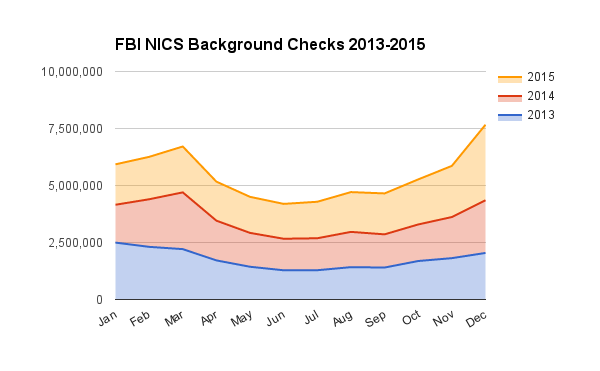 And that's what some seemed to have missed in the FBI's numbers: It wasn't slowing demand, but simply a seasonal pause. The summer months are slower than other times of the year, but the numbers are still bigger than they've ever been for this time of year.

For many, the tragic shooting in Orlando may have woken them up to the continued presence of the danger surrounding them. It was a reminder we didn't need, but one that has signaled to the market that Smith & Wesson and Sturm, Ruger remain important to self-defense.