A hostile legal climate is prompting the company to relocate its headquarters.

As Massachusetts lawmakers mull a law banning the manufacture of "assault weapons" within the state, Smith & Wesson Brands (SWBI 1.98%) recently announced it's preparing a move to greener pastures. Smith & Wesson has been headquartered in the Bay State for 156 years, but the company now hopes to move its base of operations to Tennessee.

The change is likely to benefit the company and its shareholders, not only because Smith & Wesson's product range will remain intact, but for at least a trio of other reasons too. 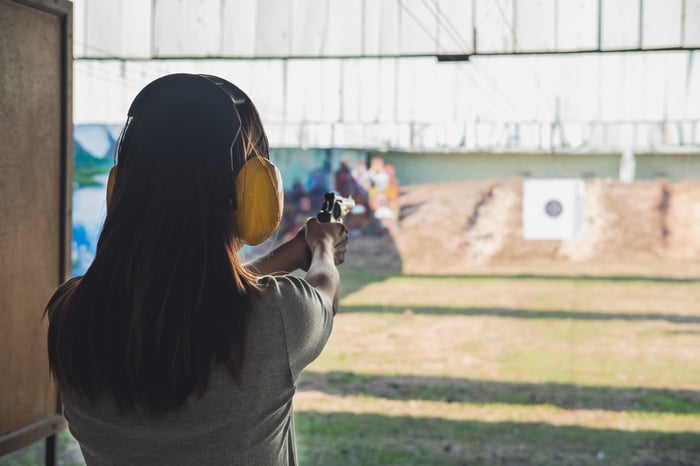 The move, above all, will enable Smith & Wesson to stay in operation. In April of this year, several Massachusetts lawmakers introduced bill HD.4192, which, among other provisions, would ban the manufacture in Massachusetts of so-called "assault weapons" (a category that includes most magazine-fed semi-automatic sporting rifles) and magazines with a capacity of more than 10 rounds for civilian sales.

If the bill becomes law, it will cause serious economic fallout for firearms companies in the state, since it prohibits the manufacture of these items for sale even in states where ownership of such firearms is legal. Only the manufacture of these guns destined for sale to the police or military will be allowed in Massachusetts. Since the state already has a number of stringent firearms ownership restrictions on the books, passage of the legislation seems likely.

In Smith & Wesson's press release on its upcoming move, CEO Mark Smith remarked that the bill, if passed, will "prevent Smith & Wesson from manufacturing firearms that are legal in almost every state in America and that are safely used by tens of millions of law-abiding citizens every day." He quantified the potential damage to the company's performance by noting "these products made up over 60% of our revenue last year."

Tennessee, by contrast, has no such restrictions on firearms manufacturing, giving the company a more friendly operating environment.

Moving out of Massachusetts is an opportunity for Smith & Wesson to free its business of deadwood. It will streamline operations by concentrating production in fewer locations, reducing duplicated expenses and potentially making manufacturing faster with multiple processes carried out under one roof.

The move, which isn't slated to be complete until 2023, will see a new factory constructed in Maryville, Tennessee, with construction probably beginning late this year. This new headquarters and manufacturing hub will take the place of two older facilities, one in Connecticut and one in Missouri. The transition will cut Smith & Wesson's locations from four down to three with the plastic injection molding currently carried out in Deep River, Connecticut shifted to Maryville and part of the Connecticut business spun off in a divestiture, which will provide some cash.

Given the manufacturing efficiency gains and easier distribution enabled by the new location, the Maryville site "is expected to be accretive to EPS by $0.10 to $0.12 per year once fully operational," according to the press release. To put this in perspective, Smith & Wesson reported $4.40 per share in annual earnings for fiscal 2021.

Both Massachusetts and Tennessee have a flat corporate tax rate, rather than a graduated one, but Massachusetts' rate is higher. While the state's "Taxachusetts" moniker is perhaps somewhat unfair, given that it falls squarely in the middle of the pack when it comes to U.S. state taxes, its corporate tax rate is still 8.0%, higher than Tennessee's 6.5%.

Tax rates are important for any company but especially so for gunmakers since the manufacture of firearms is already subject to federal excise tax -- 10% for handguns and 11% for long guns. Reducing its state corporate tax will likely help Smith & Wesson improve its margins going forward.

Why the move is good for Smith & Wesson -- and shareholders

Escaping from a region where new legislation will potentially strip it of 60% of its revenue is obviously important for this consumer durables company. However, even beyond that necessity, the change of venue looks like a positive development for Smith & Wesson investors. The historic gunmaker is likely to gain a number of additional benefits from its relocation, adding up to a long-term boost.

And in a firearms market where competition is likely to soon increase, the company can use all of the advantages it can get to help satisfy strong demand across the industry.