It's been a difficult year for FireEye (NASDAQ:MNDT) shareholders. Stock in the cybersecurity firm has lost more than 22% of its value year-to-date, and almost 70% of its value in the last 12 months alone. 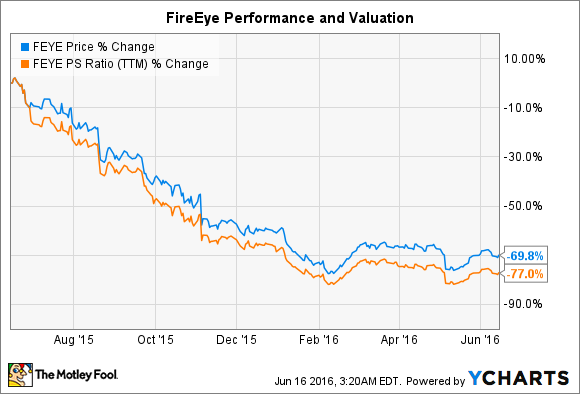 Under some measures of valuation, such as price-to-sales, FireEye is cheaper now than it's ever been, and there are plenty of reasons to be optimistic about the stock. But even trading near $15 per share, FireEye could be headed much lower. Here are three catalysts that could take a toll on FireEye's share price.

Much of FireEye's recent loss was driven by a series of disappointing earnings reports. Most recently, in May, FireEye turned in a first-quarter earnings report that fell short of analyst expectations. Last quarter, FireEye generated $168 million of revenue, but analysts had been looking for around $172 million. Worse, FireEye trimmed its guidance. For all of 2016, FireEye expects annual revenue in the range of $780 million to $810 million. As recently as February, it had expected 2016 revenue to come in between $815 million and $845 million.

FireEye did outperform expectations in one major way: It recorded an adjusted loss that was less than analysts forecasts ($0.47 per share compared to expectations of around $0.50). But FireEye is still massively unprofitable. For now, investors are focused squarely on the company's growth. Sales in particular remain paramount, and if FireEye is unable to keep generating additional revenue, investors could dump the stock. More quarterly revenue disappointments would certainly weigh on FireEye shareholders, but curtailed guidance could be even more significant, as it would raise doubts about the company's long-term potential.

Although FireEye trimmed its revenue guidance, it kept its cash flow outlook intact. For all 2016, FireEye expects to generate positive cash flow from operations of between $70 million and $80 million. That's not profitability. Indeed, FireEye doesn't believe it will be profitable anytime in the foreseeable future. ("... is it 2017, 2018, 2019, 2020 [that we achieve profitability]? We will certainly have to take a hard look at it," said FireEye's CFO on the company's most recent earnings call.)

But cash flow is more important to the company's near-term liquidity. FireEye ended last quarter with over $900 million of cash and cash-equivalents on its balance sheet. But it reported an operating cash flow loss of $23 million. If FireEye is going to hit its guidance, that figure should be positive in the quarters ahead, but if it's not, investors may begin to question FireEye's balance sheet, and sell its stock.

On Wednesday, Bloomberg reported that FireEye had been in acquisition talks earlier this year. Two firms were allegedly interested in acquiring the company outright, one of which was cyber security stalwart Symantec. But the offers weren't rich enough for FireEye, and the company is no longer looking to sell itself.

That makes sense given FireEye's recent management changes. FireEye's former CEO, Dave DeWalt, had a history of leading smaller tech companies through successful mergers. FireEye's decision to name a new CEO, Kevin Mandia, suggests that the company will now largely operate under the notion that it will be an independent, stand-alone company for the foreseeable future.

But FireEye shares rose after Bloomberg's report, and finished up 4% (notably on a day that was otherwise disappointing for stocks). That suggests some investors are still optimistic about a potential FireEye takeover. Clearly, some firms are interested, and FireEye appears to be in play. But if FireEye isn't acquired, investors who bought into the company as a takeover target could eventually abandon the stock.