There's $20 million waiting on the Moon. You just have to get there to claim it. 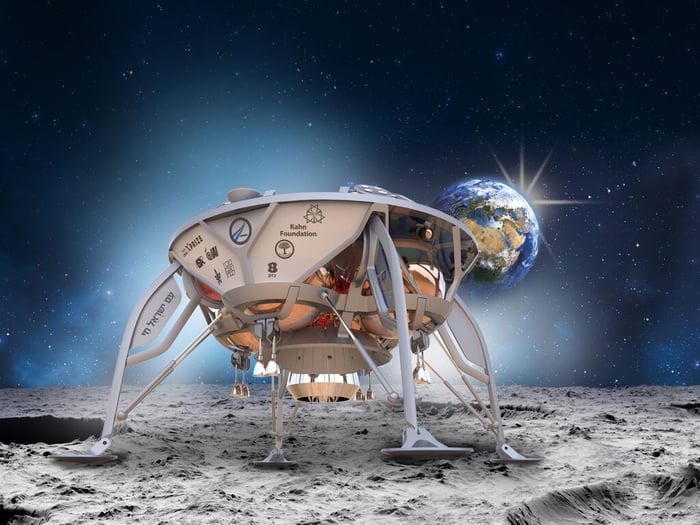 Last year, we introduced you to SpaceIL, the Israeli space tech start-up that will attempt to ride a SpaceX Falcon 9 rocket to the moon next year. If it succeeds in landing a rover on the moon, traveling at least 500 meters across the surface, and beaming back high-definition video to prove its accomplishment, SpaceIL will win Alphabet's (NASDAQ:GOOG) (NASDAQ:GOOGL) Google Lunar XPrize competition -- along with the $20 million prize that comes with a first-place finish.

Get your money for nothing and your [flight checks] for free...

Easy money, right? Well, not so fast. It cost NASA tens of billions of dollars to put the first man on the moon in 1969, and something on the order of $137 billion over the course of the entire Apollo lunar program. Even today, with rocket launches more or less routine, SpaceIL thinks it will need to raise about $50 million in funding to win Alphabet's $20 million prize.

Plus, SpaceIL might not even win the competition, because now there's a second company running close on its heels.

Moon Express could be a contender

Last week, The Wall Street Journal reported that privately owned, Cape Canaveral-based Moon Express Inc. is close to winning approval from U.S. regulators to launch its own lunar mission. Like SpaceIL, Moon Express will be competing to win Alphabet's XPrize. Unlike Israel-based SpaceIL, if Moon Express wants to reach the moon, it needs to do more than just reach escape velocity from Earth's gravitational field; it also needs to escape the dense layer of red tape blanketing U.S.-based companies.

Currently, the U.S. has no established regulatory regime for approving private missions to the Moon (or to Mars, Jupiter, or any other heavenly bodies, for that matter). That's because the only real legislation governing such missions is the 1967 United Nations "Treaty on Principles Governing the Activities of States in the Exploration and Use of Outer Space, including the Moon and Other Celestial Bodies." And that treaty was drafted primarily to regulate the actions of nation-states operating off-Earth -- not companies incorporated within them.

We discussed this treaty in a column last year, and the upshot of it appears to be that private missions are kosher if they are:

Here in the U.S., the Federal Aviation Administration is responsible for "authorization and continuing supervision" of U.S. rocket launches into Earth orbit. Accordingly, the FAA is taking the lead on an interagency review among several government offices, all of which want to review Moon Express's application to send a suitcase-size MX-1 lander and its payload to the Moon next year.

Complicating matters is the fact that Moon Express, although headquartered at Cape Canaveral, isn't actually planning to launch from the U.S. at all. Instead, it's planning to depart from New Zealand riding a 52-foot Electron rocket manufactured by Rocket Lab Ltd. (which, according to S&P Global Market Intelligence, is a privately owned company operating out of Auckland, NZ, that manufactures "rocket systems and space systems").

The FAA is expected to issue a ruling on Moon Express's application, and begin putting a regulatory system in place for similar future requests by other companies, in a matter of weeks or months. Thus, it appears that even if the government dawdles, Moon Express should have its approval in plenty of time to attempt a 2017 launch.

Assuming approval is forthcoming, it will set the stage for other missions to the moon, to asteroids, and even for SpaceX's planned 2018 mission to Mars. With a regulatory system in place, and a clear path to approval, more and more companies -- publicly traded companies, not just privately owned Moon Express and SpaceX -- should feel more confident about planning their owns missions to open up space to commercial exploitation.

As it turns out, all we really needed to do to kick-start space travel was apply the profit motive to the endeavor. So kudos to Alphabet for putting up the first $20 million prize to get the process started.

What's that glitter on the Moon up there? Could it be... gold? Image source: Getty Images.