Please ensure Javascript is enabled for purposes of website accessibility
Log In Help Join The Motley Fool
Free Article Join Over 1 Million Premium Members And Get More In-Depth Stock Guidance and Research
By Andrew Tonner - Jun 18, 2016 at 6:42AM

Think vanishing-video upstart Snapchat is all hype? Consider the following.

The social network is already larger than Twitter (TWTR 3.91%) by several measures, including active users. What's more, by 2020, Snapchat is expected to be in use by roughly 1 in 4 Americans.

Furthermore, Snapchat could earn as much as $1 billion next year as the service increasingly focuses on monetization and revenue growth ahead of a possible Snapchat IPO in 2017.

Whether you agree with it or not, Snapchat is the next big thing in social media, as a recent report from one leading researcher further demonstrates.

Snapchat now exceeds Twitter in terms of daily active users (DAUs), according to Bloomberg. Over 150 million users log onto Snapchat each day, as of earlier this month, compared to Twitter's 140 million DAUs.

What's more, Snapchat's strong performance in its U.S. figures is likely to continue. According to data from researcher eMarketer, Snapchat's U.S. user base will grow from 58 million this year to an estimated 85 million by 2020. 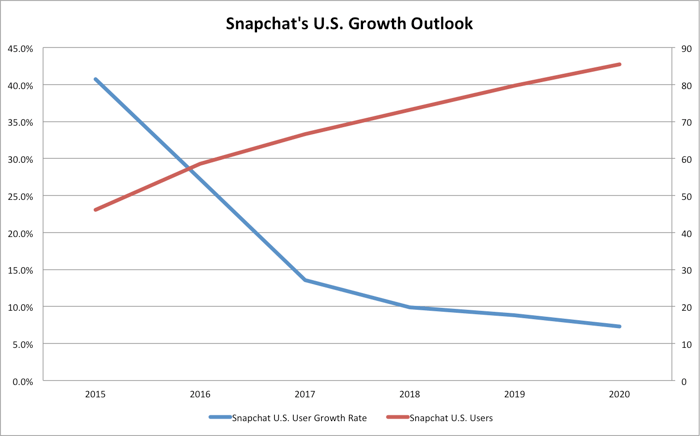 As you can see from the chart above, Snapchat is expected to reach relative maturity in the U.S. by the end of the decade, a fact that might appear worrisome to some readers. However, comparing Snapchat to perhaps its best social media proxy, Facebook (FB 1.41%), makes this appear more innocuous. For example, of Facebook's 1.09 billion daily active users (DAUs), only 172 million (roughly 16%) reside within the U.S. and Canada. This places Facebook ahead of Snapchat in terms of domestic users, but domestic users are not the majority of the user base and for reasons you'll see below, Snapchat's incredible engagement levels should more than compensate for differences in terms of users.

First, it's important to note that international markets offer a far more robust long-term growth arc for services like Snapchat. U.S.-based social media stalwarts Facebook and Twitter reached user growth maturity first in the U.S. as well. It's a function of both their nations of origin and the basic arithmetic of the global population. Either way, reconciling Snapchat's continued user growth with another key aspect of the service more fully speaks to the platform's monumental potential.

While Snapchat's user growth will assuredly slow with time, Snapchat's deep user engagement should help ensure the company continues to meaningfully increase its revenues in the years ahead.

As recently as late April, Bloomberg reported that Snapchat users viewed as many as 10 billion videos each day, up from 8 billion in February, thanks in part to the overwhelming popularity of the service's Stories feature. The extreme engagement of Snapchat's user base is perhaps the most defining characteristic that advertisers believe will fuel the service's eventual ability to print profits for its shareholders.

Ahead of June's Cannes Lions International Festival of Creativity, one of the ad industry's most high-profile events, Snapchat announced the rollout of its own advertising API, which will expand advertising on the platform. This event alone signals what should become Snapchat's gradual emergence as a budding force in the advertising industry to rival the likes of Facebook and Twitter.

And it looks like Snapchat coud indeed pose a genuine threat to established social media names. According to AdWeek, Snapchat claims its vertical video ads are five times more engaging than mobile ads from the likes of dominant mobile players like Facebook, Alphabet, and Twitter. While its pricing could change, the same report says Snapchat has reportedly charged between $40 and $60 on a cost-per-thousand-impression (CPM) basis for its early advertising inventory. This is reportedly on par with rates typically commanded by the cable TV industry.

As the above chart indicated, Snapchat's user base in domestic markets may never rival monster social network Facebook. However, early data suggests each user on Snapchat might be significantly more valuable than those of rivals like Facebook and Twitter. So, while Snapchat's valuation has some observers scratching their heads, the vanishing-video leader appears well on its way toward creating one of the most powerful advertising businesses in tech today.