Biopharmaceutical pure play AbbVie (NYSE:ABBV) has been on a spending spree in an attempt to offset impending competition for a huge chunk of its revenue stream. Healthcare conglomerate Johnson & Johnson (NYSE:JNJ) is larger and more diverse, but its size alone makes continued growth a challenge.

Over the past year the two stocks have moved in opposite directions, and investors want to know which is a better buy now. Let's take a closer look at AbbVie and J&J, comparing them on a handful of important metrics to see which is more attractive.

AbbVie stock has fallen over the past year, along with rest of the pharmaceutical industry, to about 10.3% lower than where it stood a year ago. Over the same period, J&J shareholders have enjoyed an 18.5% gain.

This divergence has made AbbVie far more attractive than J&J from a valuation perspective. At about 17.9 times trailing earnings, and 12.5 times this year's estimates, AbbVie shares are far less expensive than J&J's.

Johnson & Johnson's consumer-goods and medical-device segments combine for a majority of the company's total revenue, allowing it to avoid some of the negative sentiment casting a shadow over the pharmaceutical industry. Following the stock's steady rise over the past year, its price of about 21.2 times trailing earnings and 17.7 times this year's estimates is far above AbbVie's.

AbbVie has the upper hand in this department as well. Since its 2013 debut, the company has increased payments more than 42%, to $0.57 per quarter. At recent prices that's a forward yield of about 3.8%, and unlike J&J, AbbVie has been hiking its payout more than once per year.

You could argue that J&J's long history of increasing payments overshadows AbbVie's higher yield. However, Abbott -- the company AbbVie was spun off from three years ago -- hasn't missed a quarterly payment since 1924 and has 44 consecutive annual increases under its belt.

Around this time last year, I would have warned potential AbbVie investors that the company was spending more on dividend payments than it was earning. AbbVie's payout ratio, or amount of profits recorded over the past twelve months used to make payments, has since fallen to 63%, a comfortable level. That's not as cozy as J&J's 54% payout ratio, but overall I think AbbVie's dividend has J&J's beat.

AbbVie has been able to boost those payouts with strong cash flows from the popular anti-inflammatory injection Humira. Although the FDA approved it in 2002, first-quarter sales of the drug grew a whopping 19.2% over the same period last year to $3.58 billion.

AbbVie's biggest asset is also its biggest problem. Humira made up 60% of the company's total net revenue in the first quarter, and biosimilar competition is widely expected to put an end to Humira's double-digit sales growth in the quarters ahead. 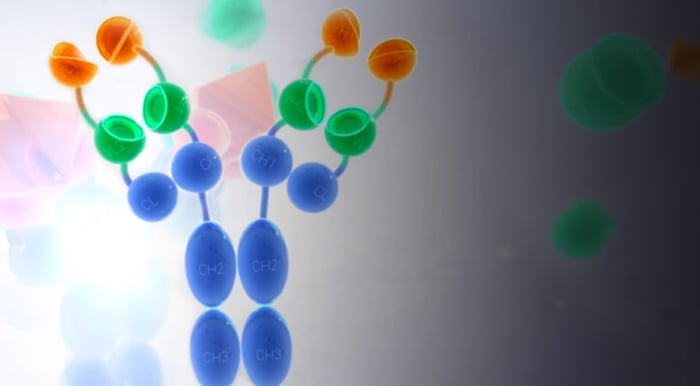 We know AbbVie's main Humira patents, those related to the compound itself, are expected to expire this December in the U.S., and in October 2018 in the EU. Complicating matters are a stack of patents related to the drug in the U.S. extending out to 2022 that make estimating the timing and severity of biosimilar competition for the drug guesswork at best.

AbbVie's more recent shot on goal, an attempt to challenge Gilead Sciences in the hepatitis C virus space with the launch of Viekira Pak, has stalled. Last year, sales of the drug reached $1.64 billion, and first-quarter sales suggest an annualized run rate of about $1.66 billion.

Its next largest growth driver, Imbruvica, is coincidentally partnered with J&J, and the two share profits equally. Toward the end of the first quarter, the blood-cancer pill earned approval for first-line solo treatment of the most common form of leukemia. As this large group of patients' first chemotherapy-free option, it could become one of the best-selling cancer therapies of its day, with peak annual sales over $5 billion.

The big difference here is J&J realized this drug's potential back in 2011 and paid its discoverer, Pharmacyclics, just $150 million upfront for rights to its potential sales. Last year, AbbVie shelled out $21 billion for Pharmacyclics and its share of Imbruvica sales.

In the years ahead, J&J's recently approved multiple myeloma therapy, Darzalex, might rack up annual sales of $5 billion as well. This is another result of an early stage collaboration deal, this time with Denmark's Genmab.

While several of J&J's early collaborations have been incredibly successful, AbbVie's most recent acquisition has the industry scratching its head in wonder. It shelled out $5.8 billion for privately held Stemcentryx and its clinical-stage cancer hopeful, Rova-T, which failed to impress at a recent scientific conference.

AbbVie's recent splurges and subsequent $29.5 billion in long-term debt are concerning and should be watched closely. Its recent clinical-stage investment track record doesn't hold a candle to J&J's, either.

The good news is that AbbVie doesn't have a lumbering medical-device segment weighing it down. As much as I am a fan of Johnson & Johnson, when you consider recent valuation and dividend factors, AbbVie ultimately looks like the better buy right now.