As recent events have clearly shown, even large-cap stocks that were thought to be stable can crater in the blink of an eye. It turns out there's a lot to be said for taking a defensive approach to investing. With this in mind, our Foolish contributors offer three stock picks below that should perform admirably in nearly any kind of market.

Andres Cardenal
Kimberly-Clark
(NYSE:KMB) is not precisely the most exciting business around. The company operates in areas such as health and hygiene, with most of its sales coming from products like diapers, bathroom tissues, feminine products, and paper towels. Make no mistake, though: Boring businesses can be remarkably profitable investments, and Kimberly-Clark has downright crushed the S&P 500 index in terms of total returns over the last decade.

The company owns several leading brands in its key businesses, including household names such as Huggies, Pull-Ups, Kleenex, Kotex, and Scott, among others. Kimberly-Clark does business in 170 different countries, and the company is expected to generate $18.4 billion in revenue during 2016. Brand recognition in combination with scale advantages and a gargantuan distribution network make Kimberly-Clark a top player in the industry. Besides, the company sells mostly everyday necessities as opposed to discretionary products, and this makes sales and cash flows more stable and predictable. 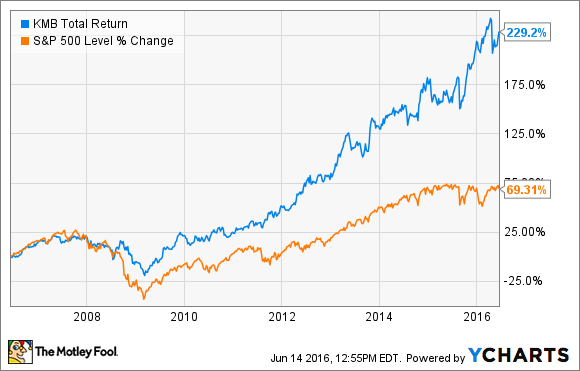 Importantly, management has been deeply committed to distributing those cash flows to investors over the years. Kimberly-Clark has a truly amazing trajectory of dividend payments: The company paid uninterrupted dividends over the last 88 consecutive years, and it has increased dividends in the last 44 years in a row. After increasing dividends by 4.5% in February of 2016, the stock is paying a dividend yield of 2.8% at current prices.

George Budwell
If safety is an overarching factor in your investing decision, I think Johnson & Johnson (NYSE:JNJ) has to be at the top of your list. Apart from being in existence since 1885 and consistently making the dividend aristocrat list due to its impressive 53-year history of consecutive dividend increases, the bottom line is that people aren't going to stop buying bandages, allergy medicines, or cancer drugs -- regardless of how the economy is performing.

The power of J&J's highly diversified business model and heavy emphasis on shareholder rewards is illustrated nicely by its performance against the Dow Jones Industrial Average over the last decade: 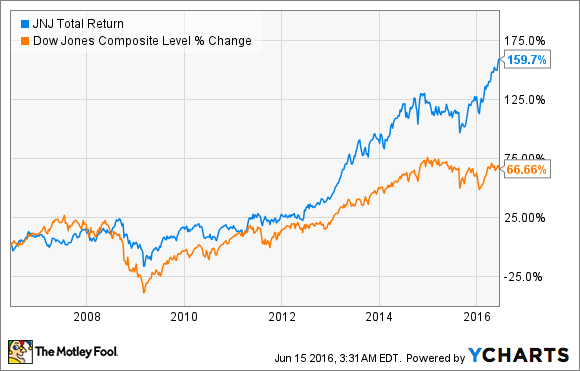 In short, J&J has absolutely crushed the Dow when factoring in the stock's rising dividend payout. Perhaps most importantly, though, there's little reason to believe this trend will change anytime soon.

After all, J&J has kept its place as a top dog in the healthcare sector for so long because it relies primarily on organic growth through its huge investments in R&D, rather than costly mergers and acquisitions. That's not to say that J&J hasn't been an active participant in the pharma M&A bonanza, but the company has taken a far more disciplined approach than many of its rivals.

For example, J&J reportedly backed out of a deal to acquire the remaining rights to the cancer drug Imbruvica after AbbVie essentially went all in by offering a whopping $21 billion for Pharmacyclics. And little over a year later, that decision is looking particularly wise, as several experimental drugs now appear to have the juice to take a big chunk out of Imbruvica's market share going forward.

Because of management's prudent approach to growth, and avoidance of leveraging its balance sheet to the max, J&J is now one of the last of two U.S.-based companies to sport a triple-A credit rating -- with the other being Microsoft. I think that fact speaks volumes about J&J from a safety viewpoint and is a solid reason conservative investors may want to own this stock.

Dan Caplinger
If you're looking for a stock with a proven business model and a history of leadership, card network giant Visa (NYSE:V) is worth a closer look. As a fairly new addition to the Dow Jones Industrials, Visa is the largest player in the electronic payments industry, with billions of cards in the hands of consumers worldwide. The company's position atop the industry goes back for decades, even though the stock has only been publicly traded for less than 10 years.

Visa makes money by taking a small percentage of every transaction that runs through its network. Because of this, unlike the banks that issue its cards, Visa doesn't take on any credit risk when someone spends money using its network. That gives Visa reliable cash flow that it has historically used to grow its business and return capital to shareholders, primarily through stock buybacks.

Some argue that Visa is in a tough position because of the rise of mobile-based payment systems that could threaten its network. However, Visa has taken steps to defend its turf and expand into the mobile realm itself. With its reputation as a dependable institution, Visa has competitive advantages over up-and-coming new entrants to the payments arena, and investors can expect the card giant to keep making advances to retain its loyal customers.