Is Elon Musk crazy? Or is he crazy like a fox?

So far, the trajectory of Tesla Motors (NASDAQ:TSLA) and Musk's other ventures have pointed rather strongly toward the latter. But the question was being asked yet again after Tuesday's announcement that Tesla has offered to buy another of Musk's ventures, solar-panel maker Solar City (NASDAQ:SCTY.DL).

Musk made it clear why he thinks this deal is a "no-brainer." In the long run, he might be right. But does it really make sense to do this deal now, given that Tesla's core business (making and selling cars) is facing the enormous challenge of getting its first-ever mass-market model into production? Or put another way, is Tesla really serious about this car-making thing?

Why the timing of this deal is raising big questions

One of Musk's recent visions is that Tesla will become the best manufacturer in the world -- eventually. But right now, the company is scrambling to figure out how it will produce the upcoming Model 3, which it plans to build in volumes much higher than anything it has so far attempted.

That's not simple. It has now been about six months since Tesla put its Model X SUV into production, and only recently has quality improved to the point where noticeable flaws aren't commonplace. On the one hand, it's good that Tesla seems to have fixed the problems that plagued early production units. On the other hand, it doesn't exactly speak well of the company's manufacturing expertise.

As I've said over and over for years when writing about Tesla, profitably mass-producing cars to global standards of quality is really difficult (and expensive). Musk has recently acknowledged that Tesla needs to up its manufacturing game in a big way, and to his credit he has begun taking steps to make sure that happens.

But getting the Model 3 designed, engineered, and into production on anything like the aggressive timeline that Musk has laid out will require -- is requiring -- a massive, near-superhuman effort from all of the people involved. Add in the challenge of getting Tesla's Gigafactory up and running in time to supply the Model 3's battery packs, and it's easy to see why the company's people (and finances) are absolutely flat-out at the moment.

So why does Musk want to try to integrate a solar-panel company into Tesla at this, of all moments in the company's history?

Musk explained on Wednesday why he thinks this deal "makes total sense" for Tesla. In a nutshell, it will allow Tesla to more fully integrate solar panels into its suite of offerings, which include the energy storage Powerwall and Powerpack units as well as the Tesla vehicles. Right now, Tesla feels that it has to hold Solar City at arm's length (because Musk owns a big stake in both companies). That has hindered their ability to create an integrated product. But if Solar City is part of Tesla, that concern disappears.

In Musk's vision, a customer who comes to a Tesla store to consider buying a car might also consider buying a solar-panel installation and a Powerwall, getting a complete clean-energy solution in an integrated package all at once. Over the next few years, there will be a lot of Model 3 buyers coming into Tesla stores. If some of them go home with a solar-panel installation and a Powerwall along with a car, Musk pointed out, that will roughly double Tesla's revenue all in a single transaction.

It does make some sense. Right now, residential solar installations are sold more or less door-to-door, using high-pressure tactics. A lot of people don't want to deal with that -- which might be one reason that only a small number of home-owning Americans have solar panels on their roofs.

Integrating Solar City's panels into a larger Tesla offering might very well tempt more of Tesla's affluent customers to consider a solar-panel installation at the same time they consider buying an electric vehicle. In Musk's view, that makes it a no-brainer: The more energy generated by solar, the better for the world -- and Tesla's bottom line.

So why does Musk want to do this deal now?

Musk didn't quite come out and say it, but I think this chart explains why he thinks now is a good time to offer to buy Solar City at a reasonable premium: Solar City's stock is near its lowest price in over two years. 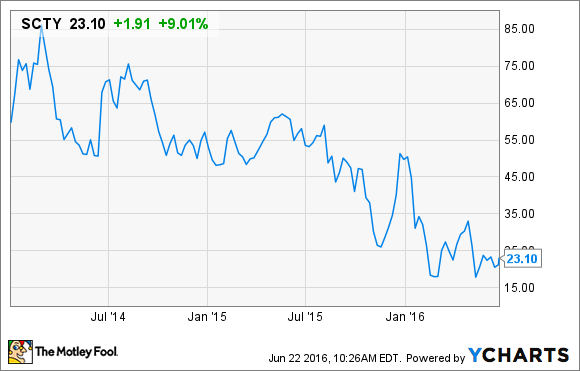 But what about the potential for disrupting Tesla's rush to get the Model 3 into production? It's a concern, but it's possible that it's overblown: Tesla Energy is a (somewhat) separate part of the business from the car manufacturing. It's possible that the Tesla Energy folks can start working with Solar City to do the engineering required for an integrated product, while Tesla postpones other aspects of the integration until the Model 3 is further along.

Or put another way, while the engineers may start working together on an integrated product right away, Tesla could let the rest of Solar City's business run more or less as it has been for a while after the acquisition. Later, when Tesla has the breathing room, it can more fully integrate Solar City into its business.

But won't it be expensive? Maybe not: Tesla's offer is all stock, no cash. And while Solar City has burned a lot of money over the last few years, Musk thinks it will be cash-flow-positive by the end of the year. He said clearly on Wednesday that he doesn't expect the Solar City acquisition to have a "material impact on Tesla's future cash needs."

The upshot: This deal really might turn out to be a no-brainer

Think like Musk for a minute: He wants to get Tesla to the point, several years from now, where it's offering a well-designed, attractive, fully integrated clean-energy solution at a compelling price. To do that, he has concluded that it would be best if Tesla produced its own solar panels. Why not buy the solar-panel firm he knows best at an attractive price?

That probably won't be enough to quell the concerns of some Tesla shareholders. But it's enough to make this longtime Tesla skeptic think that this deal could work out very well for Tesla in the long run -- if it doesn't distract the company from its Model 3 efforts.

Does Tesla Motors Even Want to Be an Auto Manufacturer? @themotleyfool #stocks $TSLA $SCTY.DL Next Article
Current