U.S. stocks are little changed in the run-up to tomorrow's Brexit referendum in the United Kingdom, with the benchmark S&P 500 (SNPINDEX:^GSPC) and the Dow Jones Industrial Average (DJINDICES:^DJI) (DJINDICES: $INDU) up 0.08% and down 0.08%, respectively, at 2:30 p.m. EDT. For long-term fundamental investors, I bring you an antidote to Brexit mania: a company in a decidedly un-sexy sector that has produced outsized returns for its shareholders, healthcare products distributor Henry Schein, Inc.

Is Stanley Bergman a better capital allocator than Warren Buffett?

Stanley Bergman is the South African-born accountant who has run healthcare products distributor Henry Schein, Inc. for over a quarter of a century. Don't feel bad if you hadn't heard of him before -- neither had I, until I read Barron's profile (subscription required) this past weekend.

As Barron's pointed out, "since taking the company public in 1995, Bergman has produced a 1,400%-plus return for investors, more than double the performance of Warren Buffett's Berkshire Hathaway." Now, that comparison is not entirely fair: After all, at the end of 1995, Berkshire Hathaway's market capitalization was $38 billion -- more than twice that of Henry Schein's today. Nevertheless, returns to Henry Schein's shareholders have been impressive by any standard: 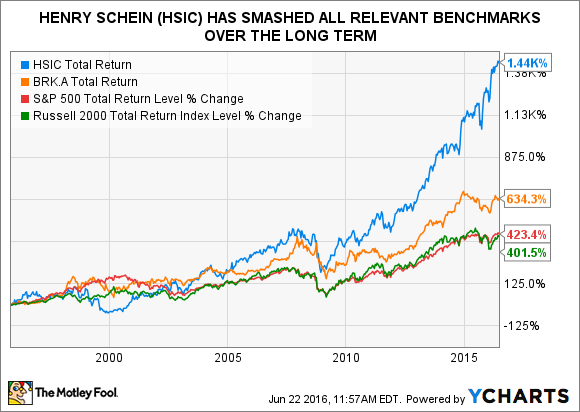 The Russell 2000 (green line) is the benchmark index for small-capitalization stocks, one of which Henry Schein was when it came public in Nov. 1995 at a valuation of $586 million (it was added to the S&P 500 only last year -- the market value had by then grown nearly 20-fold to $11.6 billion).

Not a bad result for a company whose CEO stated flatly at the beginning of 2015 that "Henry Schein does not exist for the investors." I wish more CEOs cared less about their shareholders, the way Bergman does! He's clearly a bit of an original among corporate chieftains (a quality stock-pickers ought to look for in a CEO -- conformists do not produce exceptional results), but he is quite clear on his responsibilities. Here is an expanded version of the quote above:

For the suppliers, the customers and the teams to work together, you need capital, because it's a business. We are very clear with Wall Street: Henry Schein does not exist for the investors. Having said that, we promise the investors a good rate of return and we deliver on those expectations. It's not the greatest return, it's not a bad return, it's consistent. We've been public for 19 years and in that 19 years, we've grown the earnings each year by about 16% [on average].

During that period, Henry Schein has become the largest provider of healthcare products and services primarily to office-based dental, animal health, and medical practitioners in the world. But more impressive than its growth, perhaps, is the company's profitability in a sector that is highly competitive: With limited leverage, it has achieved an average 16% annual return on equity over the past five years.

Not surprisingly, then, Henry Schein appears to have a solid grasp on the sources of its competitive advantage (there's a two-page discussion of "Competitive strengths" at the beginning of the company's 10-K report).

At 26 times this year's earnings-per-share estimate, Henry Schein's shares looks richly valued with regard to peers' and their own trading history. Nevertheless, Stanley Bergman (who signed a three-year extension to his contract in April) ought to be on every stock-picker's watchlist. Furthermore, for students of business and investing, this is an excellent case study on high-performance leaders and organizations. Bergman may not be Warren Buffett, but he has a flock of very satisfied shareholders, too.

It's rare to find an intelligent quote on the topic of uncertainty and probability in the financial press, so I had to include this snippet from this morning's Financial Times:

When President Barack Obama held the crucial meeting to authorize the 2011 raid on Osama bin Laden's compound in Pakistan, his advisors' estimates of the probability that bin Laden was there ranged from 10 per cent to 95 per cent. Mr Obama reportedly responded: "I'm accustomed to people offering probabilities. In this situation, what you started getting was probabilities that disguised uncertainty as opposed to providing you with more useful information." Summing up he said: "This is 50-50. Look guys, this is a flip of the coin. I can't base the decision on the notion that we have any greater certainty than that.

The president did not mean that the probability that bin Laden was there was 0.5; still less that the most difficult decision of his presidency was based on the flip of a coin. What he meant was that, in the face of radical uncertainty, decision makers must act even when they simply do not know -- without the aid of a pseudo-scientific numerical crutch.

Incidentally, there is a very interesting discussion of what President Obama meant with that statement in Philip Tetlock's excellent Superforecasting: The Art and Science of Prediction (full disclosure: I was a volunteer on Professor Tetlock's team in the Good Judgement Project, on which Superforecasting is based).

If you don't think this relates to investing, I invite you to reconsider. As Berkshire Vice-Chairman Charlie Munger once said: "If you don't get this elementary, but mildly unnatural, mathematics of elementary probability into your repertoire, then you go through a long life like a one-legged man in an ass-kicking contest."