Along with reporting GAAP profits, companies frequently report adjusted EBITDA or non-GAAP profits which adjust for share-based compensation. The difference between the two numbers can be extensive. For example, below is a look at GAAP and non-GAAP net income reported by some popular tech names in their most recent quarters.

Pitching profits by backing out compensation to employees is not a practice I'm fond of. Billionaire investor Warren Buffett agrees. Prior to the dot-com bubble bursting, Buffett wrote the following in his 1998 letter to shareholders:

If options aren't a form of compensation, what are they? If compensation isn't an expense, what is it? And, if expenses shouldn't go into the calculation of earnings, where in the world should they go?

Not only is share-based compensation often misrepresented by managers, it also triggers a risk that is overlooked by investors. If the price of the stock goes down, whether it is related to the company itself or the overall market, there is a higher chance of decreasing morale and higher attrition. Although any company with a large portion of its compensation tied to equity is susceptible to this risk, one that sticks out to me is Workday.

In its most recent fiscal year ending Jan. 31, 2016, Workday's share-based compensation of nearly $250 million accounted for 22% of total revenue. To put that into perspective, share-based compensation at Salesforce and Oracle are 9% and 3%, respectively. Now, imagine how much of the workforce is not going to be happy if the stock price is cut in half.

A stock price decrease of a large magnitude at a company that relies heavily on share-based compensation recently occurred. When LinkedIn reported fourth-quarter 2015 results in late January, its stock price plummeted over 40%. The next day, CEO Jeff Weiner held an all-hands meeting reassuring employees of the strength of LinkedIn:

In case the motivational speech wasn't enough, Weiner forfeited his $14 million annual bonus and gave it as a bonus to employees.

The importance of keeping employees happy is important at Workday and LinkedIn. Both companies stress the role of culture to the success of their respective businesses. In its 10-K, LinkedIn singles out its values and unique company culture as the foundation of its success. In Workday's annual report, the company mentions the failure of maintaining its company culture as a risk to its business.

When a few negative Glassdoor reviews showed that the company may be having morale issues, the company addressed them aggressively. CEO Aneel Bhusri was questioned about the reviews in its latest earning call and he answered with the following:

We've definitely had some growing pain(s) over the last 12 months. Half of the employees have been at the company for two to two and half years. It's a topic that we've been on for the last six months and one by one, I read the Glassdoor stuff very carefully, we're trying to get to the root of some of the issues and I think we've addressed a bunch of them...

Regardless of recent negativity surrounding LinkedIn and Workday, both companies still score well on Glassdoor. Of the LinkedIn employees who rated it on Glassdoor, 89% would recommend it to a friend and 98% rank its CEO favorably. In fact, Weiner was the 5th highest rated CEO of 2016. For Workday, 73% of employees would recommend the company to a friend while 94% approve of Bhusri.

What happens if the price drops?

Although it is pure speculation on my part, I believe one of the reasons LinkedIn sold itself to Microsoft (NASDAQ:MSFT) was because it was in danger of losing its highly valued employees. A price drop over 40% likely left many employee options worthless, especially the newer ones.

The company granted over 280,000 stock options during fiscal year 2015. The average price of those options was $259 per share. According to company filings, LinkedIn had 683,788 or 47% of all options outstanding that had a weighted exercise price over $170 per share. On the day of the announcement of the sale, LinkedIn shares popped 47% from $131 per share to over $192, bringing many of those options in the money.

Over the last 4 years, the amount of share-based compensation as a percentage of revenue at LinkedIn climbed from 9% to 17%. Workday is seeing a similar trajectory. 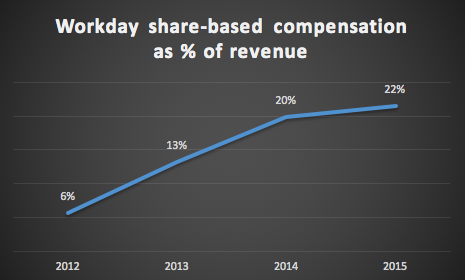 According to its most recent annual filing, the company did not grant any new stock options in its latest fiscal year. However, it did grant over 5 million restricted stock units which are priced at over $85 per share, which is near where it trades today. A 40% haircut in its share price may not necessarily mean Workday will need to find a buyer, but it will put a dent in the pocketbooks of its employees.

It's common practice in the Silicon Valley for tech companies to compensate employees with a combination of stock and stock options. While the practice often dilutes the equity ownership of the company, it also aligns the interests of employees and management with shareholders'. Additionally, cash is often needed to help grow the company. Profits are not expected over the short term so compensation in equity is a good way for these companies to recruit talent without paying high salaries. While not all shareholders are fans of share-based compensation, it is commonplace in many young companies and it does serve a purpose.

However, investors should not only keep a close eye on management's accounting treatment of options, but they should also be keen to how a drop in stock price can affect employee morale and turnover.

How Big of a Risk Is Share-Based Compensation at Workday? @themotleyfool #stocks $LNKD.DL $WDAY $MSFT Next Article
Current