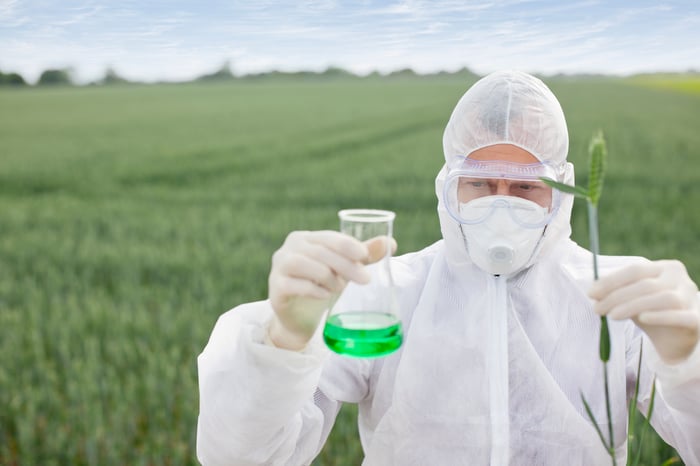 It's going to take a bit of alchemy to bring Bayer and Monsanto investors together since they stand so far apart on what a reasonable price is for the biotech. Image source: Getty Images.

German chemical giant Bayer (OTC:BAYR.Y) will need to raise its offer for Monsanto (NYSE:MON) from the current $122 per share if it wants a more detailed look at its books. Monsanto still seems like it wants to do a deal with its rival, but it wants to see more money on the table.

It is possible Bayer will come back with a new, higher offer, but can it offer enough money to satisfy Monsanto shareholders without causing an outright rebellion among its own investors? The answer is increasingly looking like "no."

Global asset management firm Sanford C. Bernstein recently conducted a survey of Bayer and Monsanto shareholders to gauge their opinion of the proposed buyout, and though it was unsurprising the latter favored the deal and the former opposed it, the wide gulf between the two when it comes to the price suggests the possibility they'll be able to negotiate an agreement is slim.

Bayer's $62 billion all-cash unsolicited offer for Monsanto marks a dramatic departure from the chemical and pharmaceutical company's previous path of selling off non-core assets and focusing on its primary competencies, but it has a new CEO in Werner Baumann, who only assumed the duties last month and may be trying to imprint his vision on the company.

That outlook, though, isn't sitting well with investors, who, immediately after the takeover offer was announced, castigated it as an "immediate destruction" of shareholder value. That view seems to be shared by the investors surveyed by Bernstein, who by and large believe Bayer should focus on either healthcare (50% of respondents) or its pharma pipeline (39%). Only 7% believe it should do the deal with Monsanto.

Bayer investors don't want to merge with Monsanto and think the German company should stick to its knitting, focusing on either pharmaceuticals or healthcare. Image source: Bayer.

In contrast, Bernstein found 84% of Monsanto shareholders thought the best way to maximize value was to get the deal done. The problem is in the price: On average, Monsanto investors believe $137 a share would be reasonable, yet the Bernstein notes Bayer's management is rumored to have already nixed the idea of a secondary bid going that high. Worse, 56% of Bayer investors think the initial $122 was already way too high, and fully 69% of them said it shouldn't go any higher than that.

Bayer seems to have put itself into a position where it's already bid well above what most of its investors think is a fair price, yet well below what Monsanto investors think their company is worth.

It's clear Monsanto shareholders are on the same page with their management team, which is why Monsanto didn't disparage the takeover attempt beyond saying the offer was "incomplete and financially inadequate." It even went out of its way to praise Bayer's business and argued "substantial benefits" could be derived from a merger of the two companies.

Yet there's good reason why Bayer might not be willing to go much higher, beyond just the ire of its shareholders. Monsanto is facing headwinds on multiple fronts, from falling crop prices and lower demand for fertilizer and seed, to fluctuating foreign currency exchange rates. It still has to deal with widespread opposition to its products, conflicting opinions of whether those products are carcinogenic, and the impact all of that has on its profits.

Earlier this year it cut its earnings outlook to a range of $3.72 to $4.48 per share from its prior estimate of $4.12 to $4.79 per share. While that's partially a result of the restructuring Monsanto is undergoing, it also highlights the difficulty it will face of going it alone in the future.

It probably would have been more beneficial to both companies had Bayer sought to pursue a series of joint ventures with Monsanto rather than trying to buy it outright, though only 13% of the Monsanto shareholders Bernstein surveyed thought that was the best way to maximize value for them.

While the Bernstein survey is admittedly only a small sampling, it does highlight the wide gulf the two sides face in trying to negotiate this deal. Bayer seems to have the most to lose as it offered too much too soon, without support, essentially painting itself into a corner.. And Monsanto might not need to do a deal -- the fact that it tried to buy Syngenta on its own indicates it sees the benefit of a potential merger.

Bayer, though, seemingly doesn't care. In a filing with the SEC on Tuesday, the life sciences company released a partial transcript of a conference call it had with select shareholders wherein it reminded them it didn't need their approval to pursue the deal.

In it, Bayer executives admonish the investors saying, "One final point. Let me be very clear on this. A shareholder vote is not required by German law...The success of our offer...is also dependent  on the transaction not being subject to financing or shareholder approval conditions."

Just seeing how wide the chasm is between Bayer and Monsanto, and the short shrift Bayer is paying to its shareholders, there doesn't appear to be any price that can be offered that would be satisfactory for all parties.