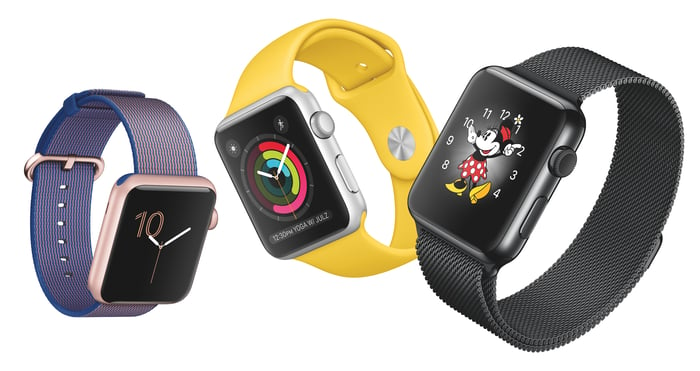 When Apple (NASDAQ:AAPL) launched the iPhone in 2007, it brought a new level of computing to phones, but it also controlled the experience very closely. Apple limited what networks the device was on, limited third-party developer access (the App Store wasn't even available at launch), and controlled the user experience in ways most computer companies at the time didn't. And that's a major reason the product was so successful.

When it launched the Apple Watch, Apple took a lot of the same concepts from the iPhone and just moved them onto the Watch. Apple ported in from your phone, developer abilities were very limited, there wasn't much cross-functionality between apps, and the experience was very controlled. It made for a unique experience in watches, but it opened up a lot of flaws Apple didn't have to deal with on the iPhone.

As an Apple Watch user, one of the biggest flaws that's starting to affect me more than I'd like is the walled-off design of the watch. The vast majority of people have just one phone, so if your apps or data don't port to an Android or Blackberry phone, it's no big deal -- but watches are different.

Watch-wearers don't usually have just one watch. There may be a main timepiece they use every day (for me, that's the Apple Watch), but when working out or going to a wedding, maybe something else is more appropriate. And for some activities, like swimming, the Apple Watch simply isn't an option. Timex estimates that the average watch-wearing man has five timepieces.

The key issue is you might not want to wear your apple watch all the time. And, Apple has made it hard to pair the watch with non-apple devices, such as a Fitbit (NYSE: FIT) fitness tracker, which may be an alternative watch consumers prefer for certain activities. So much of the watch's data is walled off which reduces its appeal, even for someone with many Apple devices, like myself.

How the Apple Watch experience can improve

Apple could open up its software, even a little, to communicate easily with other devices from companies like Garmin (NYSE:GRMN), Fitbit, or even Samsung. They're all making devices that are compatible with the iPhone, so there's nothing holding an Apple customer back from buying their products. But there is a barrier in adopting the Apple Watch if you own a Fitbit or Garmin, even if you're an iPhone user, and that limits the market.

Many people who are running in a marathon or competing in a triathlon with a fitness tracking device are using something other than an Apple Watch. Those should be users Apple wants to attract given its focus on fitness, so the barrier between those devices and the Apple Watch needs to come down if Apple is going to grow adoption.

One of the core products of the Apple Watch is the activity tracker, something most other smart watches have as well. But Apple Watch doesn't communicate well with third-party trackers on the Apple Watch, and if you're using another device, it won't import steps, calories, or exercise time from those third-party devices. In other words, if you're not wearing your Apple Watch all day, it's as if your activity didn't happen. It takes away one of the best reasons to own the device.

There are other integrations like routes on maps, health, and even swim tracking that's become common with other devices, but that can't be synched to the Apple Watch, and that limits the device's market. With third party apps like Strava and MapMyRide having millions of users already interacting with each other, why not tap into that data? Apple is still treating the watch like it's a winner-take-all market, when it should be treating it like one of many watches the average user will own.

The Apple Watch is different and should be treated so

If the Apple Watch is going to be Apple's next big product line it has to provide the functionality more consumers need. And given Apple's reach it could have potential. An estimated 12 million Apple Watches were sold last year, which pales in comparison to the 232 million iPhones sold in 2015 and millions more sold in prior years. The market opportunity is incredible if Apple can get the watch right.

Apple is slowly improving WatchOS to give users the information and operations they desire, but it has a lot of weaknesses that make it susceptible to competition. The most glaring weakness is the way it walls off data that users generate whilst not wearing the watch, data that they may want to import or export from other apps or devices. Until Apple adapts to the way watches are different from phones or computers, it will limit its own market opportunity.