Stocks opened the trading session with sharp gains, and the rally only gained steam into the afternoon hours.

As U.K. residents voted in a closely watched referendum on whether or not to remain in the European Union, the Dow Jones Industrial Average (DJINDICES:^DJI) added 230 points on Thursday, or 1.3%, to close back above 18,000. The S&P 500 (SNPINDEX:^GSPC) gained 28 points for an identical 1.3% jump: 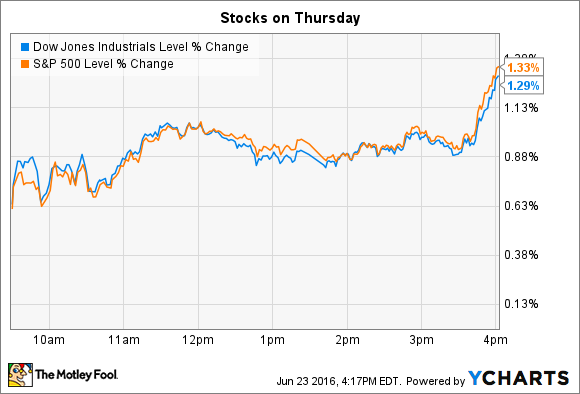 In economic news, weekly jobless claims fell to a three-month low of 259,000, according to a fresh report from the U.S. Department of Labor. That marks the 68th-straight week that claims have been below 300,000, the longest such streak since 1973.

Bed Bath and Beyond shares rose slightly on heavy trading following the dip after its fiscal first-quarter earnings announcement yesterday. Comparable-store sales dropped by less than 1%, the retailer said, marking a reversal from the prior quarter's 2% increase.

Digging deeper into that result, BBBY endured a decline in both of its key sales channels. E-commerce growth slowed to 20% from 25%, and in-store sales gains fell from flat to a low-single-digit drop. That translated into a 23% profit slump, as earnings fell to $0.80 per share from $0.93 per share a year ago.

Image source: Bed Bath and Beyond.

Profitability held up well, given the sales shortfall. Gross profit margin ticked down to 37% of sales from 38% last year, which suggests prudent inventory and pricing management by CEO Steven Temares and his executive team. While there is some good news, the sinking customer traffic pace makes it clear that management still has key challenges to face in keeping Bed Bath and Beyond relevant as shopping moves online.

Executives confirmed their 2016 forecast that calls for earnings of as much as $5.00 per share, which is consistent with what it has earned in each of the last two fiscal years, despite what looks set to be flat sales.

Defense contractor CACI International's stock fell 8% after it laid out a conservative forecast for sales growth in the coming year. In an investor presentation, executives highlighted the company's large backlog of contracts, and healthy pipeline of new business in the works. These indicators suggest CACI can produce solid gains in existing contracts while getting significant help from its new national-security solutions segment.

The integration of that business is proceeding well. "We bought a great company at a great price," CEO Ken Asbury told investors in late April. "We continue to see NSS bringing strong financial and strategic value to our business."

However, shifts in customer purchasing behavior are pressuring sales for the coming year, management explained. As a result, Asbury and his team see sales of $4.2 billion in fiscal 2017 compared to the $4.4 billion that Wall Street pros had been modeling. Net income should still log a healthy, double-digit improvement.

CACI also believes its annual cash-flow pace will rise to $240 million compared to the $225 million it expects to generate in fiscal 2016. Investors chose, instead, to focus on the contractor's weaker sales-growth outlook by selling shares, even as the broader market rallied.